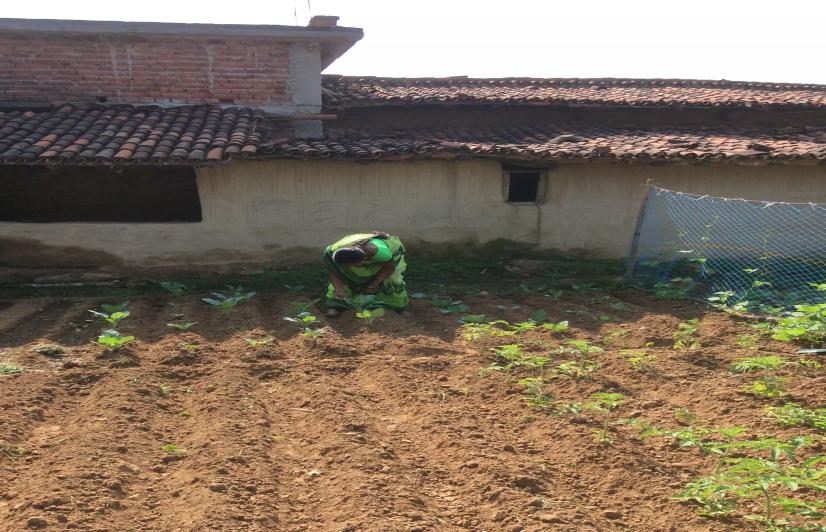 Clad in a pink saree, Neha Kumari, 24, walks around her nutri-garden or poshan vatika at Shailkala village in Ichak block of Jharkhand’s Hazaribagh district. Started about a year ago, her tiny plot measuring about 450 square feet caters to her and her family’s need of seasonal vegetables and leafy greens throughout the year. They grow sponge gourd, cauliflower, tomatoes, cucumber and pumpkin on the plot. Seven months pregnant, Neha isn’t worried about her access to nutritious food anymore.

Over 67% of rural women in Jharkhand are anaemic, according to the National Family Health Survey-4 (2015-16). Experts say the main cause is lack of information about nutritional requirement. To improve the situation, a Jharkhand-based non-profit organisation Srijan Foundation and international organisation Digital Green began an outreach programme targeting women in December 2017. They encourage women to build kitchen gardens to tackle nutrition deficiency.

According to Dayal Prasad, a block coordinator in Ichak from Srijan Foundation, about eight videos are shown to women. He said the investment cost and running expenses of a nutri-garden are minimal and women spend about Rs400 in total: Rs300 on nylon nets for boundary and Rs100 for seeds.

“The videos helped me a lot. After watching them, I learnt to grow and care for my plants properly. Earlier, the women in my village were not aware of proper food consumption keeping the nutrition aspect in mind. Most of them didn’t pay attention to the diverse food needs and worked continuously without resting,” Kumari said.

Like Kumari, her neighbour Reena Devi, 32, also started her own kitchen garden in 2017 after watching the videos at the mini anganwadi centre. Before that, like others, she used to grow only one vegetable at a time and buy the rest from the local market. Currently, 40 women in Shailkala have these nutri-gardens. In Ichak, the number of such women stands at 2,000.

According to Chanda Devi of Srijan Foundation, monthly meetings are conducted at anganwadis to make women aware of the benefits of these gardens. She added that many women who don’t have plots are growing vegetables in sacks.

Mamta Devi, 27, a resident of Kaladwar village, which is about two kilometres from Shailkala, has grown numerous vegetables in sacks lined up on her wall. She has also started work on her nutri-garden where she plans to grow brinjal, beans and tomatoes to start with.

Besides Shailkala, nutri-gardens are being promoted to address the issue of malnutrition and anaemia prevalent among pregnant women and those in the child-bearing age in 39 other villages around Ichak. Videos of five to six minutes in length are regularly shown to spread awareness among rural women on various aspects of healthcare—need for dietary diversity, eating seven types of food during pregnancy, pre- and post-natal care, exclusive breastfeeding, child care and complementary feeding after six months.

Shailkala anganwadi worker Soni Devi stated that earlier, women in the village used to not pay attention when told about diet diversity and nutrition. However, the videos have solved the problem as women watch them attentively. The haemoglobin level used to be low among pregnant women, but now the levels are normal, she said.

Kamal Jaiswal, a technical support officer for sustainable agriculture at the Mahila Kisan Sashaktikaran Pariyojana, a government initiative, stated that the nutri-garden model has worked well among Jharkhand's women farmers who mostly grow rice on small plots. He underlined that the concept was introduced to get women to consume vegetables, and not just rice and pulses. He added that a study will soon be conducted to probe the impact of the initiative.

Nutri: Reena Devi of Shailkala village tends to her plants in the nutri garden
nutri 1: Mamta Devi of Kaladwar village with her sacks of plants
nutri 2: Neha Kumari of Shailkala in her poshan vatika
All pics by Deepanwita Gita Niyogi
ExclusiveHealth