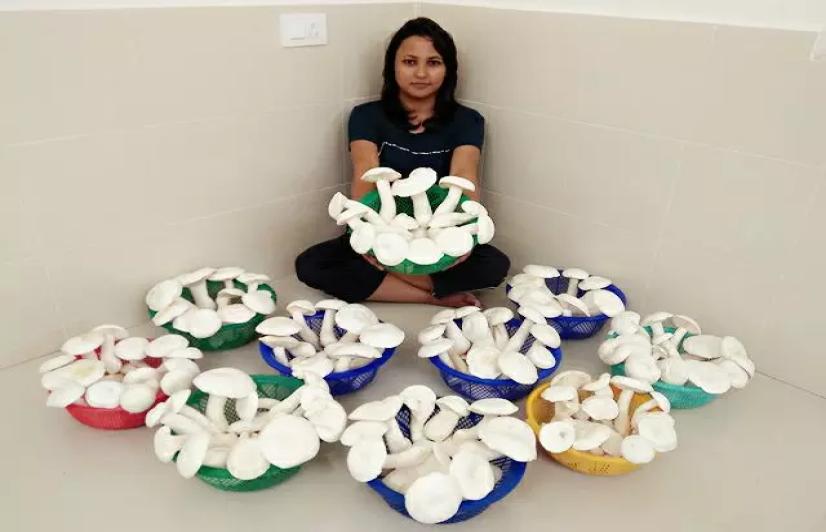 Chamoli, Uttarakhand: A resident of the remote district of Chamoli in Uttarakhand, agri-entrepreneur Divya Rawat, 27, was determined to combat the menace of migration and unemployment plaguing the state. With her initiative, ‘Mushroom Mission’, she has been able to train almost 5,000 people, out of which 60% are women and youth, in mushroom cultivation. After receiving the training, people who were willing to migrate for as less as Rs 4,000, are now able to earn as much as Rs 2 lakh per crop cycle, depending on their investment.

Rawat moved to Delhi for her graduation and post-graduation and started working at an NGO soon after finishing her studies. However, when she realised how disastrous the rapid migration was proving to be for Uttarakhand, she quit her job and went back to her home state determined to change the situation.

Uttarakhand has seen over 3.83 lakh people migrate, out of which 50% migrated in search of livelihood, from the villages in the last 10 years, according to a report by Uttarakhand Rural Development and Migration Commission (URDMC).

After quitting her job, Rawat started Soumya Foods Private Limited in 2013 and subsequently the ‘Mushroom Mission’, which enables people to cultivate mushroom indoors. “There are people who started small farms earning about Rs 5,000 and slowly within three years, they increased the size of farms and now they earn in lakhs,” she stated.

She pointed out that she chose mushroom cultivation after researching on marketing parameters, and found out the huge difference between the wholesale price of onion and potato, which is around Rs 10 per kilogramme, and mushroom, which is Rs 100 per kilogramme.

She trained at the Indian Council of Agricultural Research-Directorate of Mushroom Research in Solan and found out that since it is cultivated indoors, wild animals and natural calamities, which are the two biggest threats to agriculture in the state, won’t affect the crop.

As per the 2011 Census, 1,053 of Uttarakhand’s 16,793 villages have no inhabitants and another 405 have a population of less than 10. Since 2011, 734 villages have become uninhabited. To solve this, Rawat scaled up and started training people to give them a means of livelihood.

A resident of Chamoli, Priya Tyagi, 22, a housewife who cultivates mushrooms, stated that she wanted to always do something on her own, but since she got married at 18, her in-laws didn’t allow her to work. She then underwent training under Rawat and is now cultivating mushroom around her house.

Virender Singh Sajwan, 35, a resident of Dehradun and a mushroom entrepreneur, stated that he moved from Bengaluru to his hometown and now he cultivates mushrooms and earns Rs 20,000 each month.

Migration can lead to unplanned urbanisation, especially in plains. The economic process is also concentrated in the plains which will widen the income gap between plains and hills. This will also increase human-animal conflict and water stress in the plains.

Rawat highlighted that only big cities can’t take everyone’s load as there are limited resources. So, the solution to migration is to create opportunities that will develop the country and even effectively manage problems like pollution, education or health, she opined.