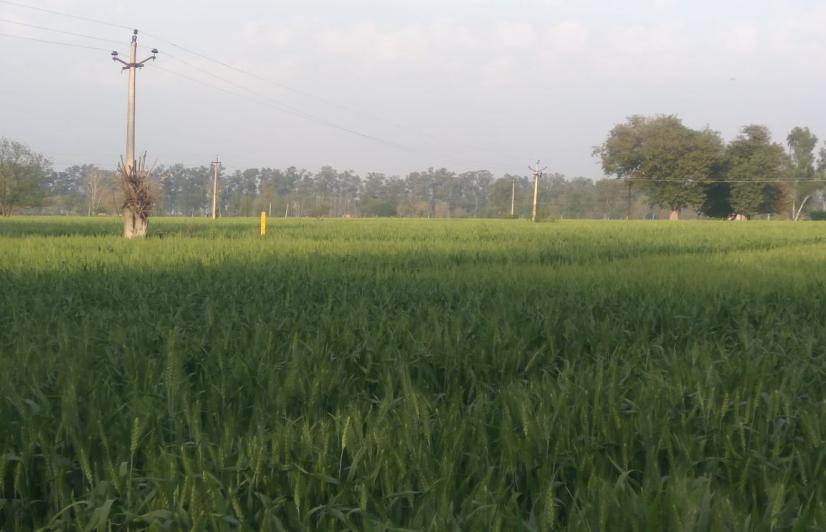 For Katarpur corridor construction, handling Pakistan is not the real challenge for India

Gurdaspur: Despite the heightened tension between the two neighbours after India's recent aerial strikes against terror camps in Pakistan, the bigger challenge for India in constructing the cross-border Katarpur corridor could be negotiating opposition from farmers seeking a higher price for their land.

So far, Lakha Singh of Pakhoke village is the only farmer who has given away his 16.5 acres of land to the government after which construction of the Integrated Check Post (ICP) by Land Port Authority of India started on March 19 at Dera Baba Nanak. He will be compensated once the land acquisition rates are fixed by the government.

The Border Security Force (BSF) has set up a post at Dera Baba Nanak town where devotees can see the Gurudwara Darbar Sahib in Kartarpur through binoculars from the Indian side.

Bhua Singh, 74, is one such daily visitor to the post. He is also a farmer whose three acres of land has been identified by the government to be procured for construction of the holy corridor. But he is clamouring for a higher compensation even as the authorities have not decided on the amount so far.

Sitting on a bicycle amidst a lush green farm where the wheat crop is set to be harvested, Singh says that one farmer volunteering to hand over his land for construction of the corridor doesn’t mean that all the farmers would do the same. “We also want that a corridor that connects us directly with the shrine dedicated to our first Guru must be constructed, but what we will do when we give away our land on a lower price?” he questions.

He said the government must ensure that the future of farmers who give their land for the construction of corridor is not ruined, and must be compensated appropriately.

His thoughts were reiterated even by other farmers who believe that a rate of Rs 25 lakh per acre could be given to the farmers for procuring their lands in three villages -- Jaurian, Chandu Nangal and Pakhoke -- for the construction work. While the collector rate in all these villages is around Rs 3 lakh per acre, farmers often get much more than this in the open market.

According to the sub-divisional magistrate (SDM) of Dera Baba Nanak, Gursimran Singh Dhillon, nearly 111 acres of land has to be procured for construction of ICP as well as the road that will lead up to the zero line on the border. “Names of nearly 220 families, including 450 individuals, who own the required land has been sent to the higher authorities. We have asked these individuals to submit objections if any. The rate of compensation will be announced in the coming days as we are finalizing the claims by these farmers now,” said the officer.

Gurnam Singh, 48, another farmer of Jauriyan village, who has one acre of land, says the authorities suddenly brought heavy machinery on March 19 and caught the farmers of the area unaware. “Land is the only source of income for the farmers that we till and sow crops. Even if we are awarded compensation of Rs 25 lakh per acre, what will farmers like me do who have only one acre of land?” questioned Singh.

He said local officials of the district administration have held meetings with them and asked them to submit their objections and land rates they want.

Since the inception of the idea, the corridor has remained mired in controversies. Punjab cabinet minister Navjot Singh Sidhu had gone to the swearing-in ceremony of Pakistan Prime Minister Imran Khan where he was reportedly told by Pakistan army chief Qamar Javed Bajwa that Pakistan was considering opening up of the religious corridor. The issue later became the epicentre of a political slugfest after the BJP and the Congress jumped into the scene to claim the credit for opening up of the corridor and score brownie points among the Sikh community.

Sarbajit Singh, 74, another farmer in Dera Baba Nanak, says connecting this side of the border with Kartarpur in Pakistan and compensating the farmers are different issues. “The government is trying to emotionally blackmail the farmers in the name of religion and wants us to give our land at throwaway prices. There were reports that the farmers had agreed to give their lands at Rs 25 lakh per acre to the government but these are false. We want a much higher price for our land as we will be left with no other income without our fields,” said the farmer explaining his predicaments.

Even real estate dealers say that land rates have sky-rocketed in the area after the announcement of Kartarpur corridor that would bring in domestic and international tourists. Real estate agent Rakesh Kumar says that an acre of plot that earlier cost Rs 14-16 lakh is now worth Rs 35-38 lakh in Dera Baba Nanak area.

In the meantime, technical teams from both India and Pakistan are also holding regular talks so that the corridor is aligned correctly on both sides of the border. However, construction on a stretch of nearly 20 feet, a no man’s land between India and Pakistan, is yet to be decided upon by both the sides. The corridor is to be built before November this year, the 550th birth anniversary of Guru Nanak Dev.

Punjab minister Sukhjinder Singh Randhawa sees no hurdles in the construction of the corridor. “A farmer has volunteered and given his land for construction of ICP and I hope that others would also follow suit. Very soon, construction of the road for corridor will also start,” he claimed. Land Port Authority of India’s manager Sukhdev Kumar is also confident that his team will complete the work for ICP before Guru Nanak Dev’s birth anniversary.