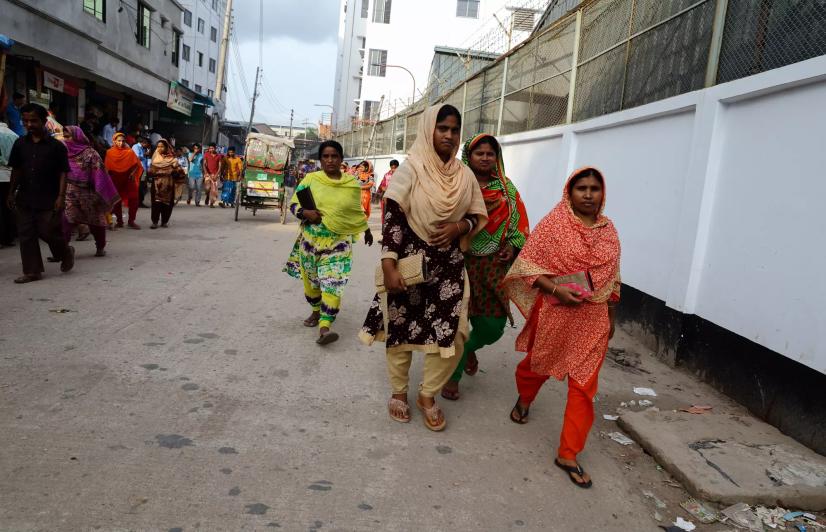 For the past nine years, the Sheikh Hasina government in Bangladesh has formulated schemes with the objective to improve women’s condition in the country. Schemes implemented under the Hasina regime have bolstered the nation's female labour force, which has increased by more than 35 per cent in the past decade and risen to 18.1 million women.

During her first term in office, the Hasina-led government passed the Local Government Amendment Act, which reserved seats for women in local government bodies and created the exclusive post of vice-chairperson for women in each parliamentary sub-division, enhancing participation across the spectrum.

The number of seats reserved for women in Parliament has also risen to 50 from 30, while female legislators make for one-fifth of the 350 seat house. And, as of 2018, women occupy the
roles of the Deputy Leader, Speaker, and even Leader of Opposition in the Bangladesh Parliament.

The NWDP sanctioned monthly allowances for widows and more than 9.2 lakh of them have reaped its benefits since 2011. There are also arrangements for them to receive further education and extensive vocational training, particularly in the field of agriculture.

Impoverished women too were brought into the fold with the government providing more than 7.5 lakh women with 30 kgs of rice per month as food security.

Despite the progress, women only contribute to 28.4 per cent of Bangladesh's entire workforce, with most of them employed in agriculture or other labour-intensive work, rather than occupations that require higher education and technological familiarity.

“I took a loan under a women’s scheme and that is how I could start this shop. I used to work as a housemaid before and without this opportunity, I may never be able to work with dignity,” she said. Now, Taslima earns three times more than what she was earning before and is being able to send her three children to school.

The Hasina regime has covered ground in backing female entrepreneurs through a slew of policies stemming from Bangladesh Bank, the nation's central banking institution.

In 2015, the bank made it mandatory for every financial institution in the nation to provide, at least, one female entrepreneur a loan worth a minimum of 50,000 Bangladeshi Taka (USD596) per year, whilst simultaneously entitling Bangladeshi women to loans at a discounted 10 per cent interest rate.

The bank also created the Women Entrepreneurs Development Unit, the nationwide branches of which specialize in training female entrepreneurs and providing them with financial credit without collateral. The Bangladesh Bank has sanctioned for widespread availability of easy refinancing, and reserved 10 per cent of the country's total small and medium enterprises (SME) fund for women, leading to over 32,000 businesses and 54,000 female entrepreneurs receiving loans worth more than USD600 million in 2017 alone.

However, there is still a huge disparity in ownership of bank accounts between men and women in the country. The World Bank Global Findex 2017 database, a data set with information on how
people manage their accounts, revealed that in Bangladesh, there is a gender gap of 29 percentage points when it comes to owning a bank account. Although women’s bank ownership in the country has increased to 36 per cent, a 10 per cent increase since 2014, it is overshadowed by men who are much ahead with 65 per cent.

The central bank has enabled for women to receive ample agricultural credit and the administration has cleared swathes of khas (government owned fallow land) land for allotment,
the financial aid being backed by government programs intended to proliferate modern agriculture methods.

Development of such technology has led to an increase in usage of aquaculture techniques, and the dissemination of these to even the farthest-flung of rural regions has enabled a significant portion of the populace to utilize water-bodies in their own backyard for fishing, a phenomenon largely responsible for the fact that 60 per cent of the fish farmers in Bangladesh are now women.

The incumbent regime has also focused on sustaining the noticeable female presence in the ready-made garment (RMG) industry, an influential mainstay of Bangladesh’s economy that accounts for almost 79 per cent of the nation's total earnings from export. It is one of the few sectors, with nearly 4 million workers, where women outnumber their male counterparts. The estimated  proportion of women workers in the RMG industry is as high as 80 per
cent.

Back in the 1980s, when the garment sector was booming, the employers wanted to recruit young women because they were less educated and did not have the bargaining power.

Between the period of 1990-2000, the nominal increase in salary for women working in the RMG sector was five per cent, compared to the eight per cent for men, with hardly any incentives or
guaranteed wage standards.

During Hasina's incumbency, incremental salary raises and bonuses among the genders have been made equal, with minimum wages too almost doubling for men and women, from 3,000 Tk (USD36) per month a decade prior to near 8,000 Tk (USD95) today. Women in the RMG sector have also seen avenues of higher education and training being opened up to them. However, this does not seem to be enough if textile workers are to be believed.

Moni Akhter, 18, joined the textile factory two years ago where her husband has been working for the past seven years. She says that they are both working now because life in a city like Dhaka is too expensive.

“In a slum, we are living like animals. For 200 people there are three toilets. Cost of living is
so high that I can’t save anything and long work hours make me sick. Increase in the payment will ease our life a little bit. But if the prices keep going high, we can’t survive. How long can we live like animals?” she asks.

Nazama Akhter, President of Sommilito Garments Sramik Federation, acknowledges the plight of the textile workers. “I urge to Prime Minister to consider increasing their salary so workers can get to live a better life. The house rent and commodity price never remain stable. For the minimum requirement of living workers need an increase in their salaries,” she says.

Although there have been several steps towards progress, the path seems to be ridden with challenges. With elections looming large, the decision of the citizens is going to show how happy they are with the incumbent government.