The Muslim village that grows lotus for temples, supplied them for Modi 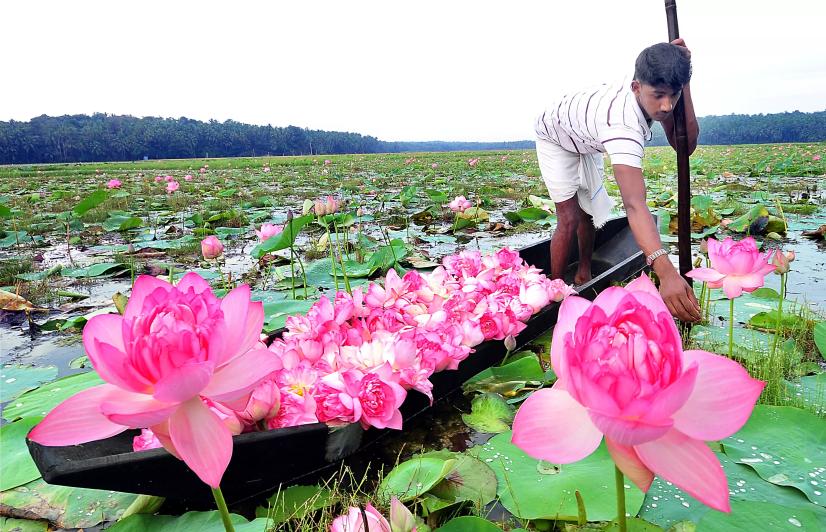 Malappuram, Kerala: During early mornings and late evenings, Edakkulam village of Thirunavaya Grama panchayat in Malappuram district of Kerala is as busy as a bee. Urgency is in the air and youngsters can be seen plucking lotus flowers, which are just beginning to bloom, by balancing on canoes. Vehicles would carry the flowers to different temples across the state and outside.

Being the lone traditional lotus-growing community in the state, Chakkalaprambil Musthafa and his neighbours supplied 112 kilogrammes of lotus flowers to Kerala’s famous Guruvayur Sri Krishna Temple on June 8. Ninety-one kilogrammes of it was used to perform Prime Minister Narendra Modi’s Thulabharam recently.

As per the custom of the ancient temple, thulabharam is an important offering to Lord Krishna wherein a person is weighed against a commodity such as flowers, grains, fruits and similar articles and the equal value or quantity is offered as donation. In the case of Modi, the preference was the party symbol of blooming lotuses.

It was at short notice; the temple-managing committee was entrusted with the task of sourcing more than a quintal (100 kilogrammes) of fresh and quality lotuses for the Prime Minister’s thulabharam. Like previous occasions, the temple managing committee had contacted Musthafa and his neighbours—Karakkadan Abdu, Salam Kodakkal, Kalluvalappil Moidu, CP Kunhali and P Moideen Kutty—to supply the required amount flowers in time.

Like the rest of Malappuram district, Edakkulam is predominantly a Muslim village with more than 85% of residents following the Islamic faith. Looking at the vast stretches of wetlands, you can notice bloomed lotuses in abundance. Lotuses from these wetlands meet the ritual related needs of almost all the major temples of Kerala including Sabarimala, Guruvayur, Kadampuzha, Paramekkavu, Vadakkumnathan, Parassinikadavu and Kottiyur. For the last two decades, even temples in Coimbatore and Bangalore are buying flowers from here.

“As per belief, the devotee is submitting himself to the deity through this ritual. Conducting the ritual without making any wish to the deity is considered ideal,’’ explained KB Mohandas, chairman of Guruvayur Devaswom Board—which manages the temple.

According to temple priests, a Thulabharam with lotus flowers signifies long life, high performance in work, advancements related to employment and significant improvement in mental strength.

For other rituals, Guruvayur temple requires 400 flowers every day. Musthafa said the temple authorities are highly appreciative of their work while adding that they have never faced any discrimination from members of any other religion. “Hindus are very much appreciative of our sincerity and respect to their customs,” Musthafa added. So far, none of the hardline Muslim outfits has objected to them supplying flowers to Hindu temples.

Kunjali, a lotus trader for 25 years, said they supply growing high-quality lotus varieties at affordable rates to different temples. “We feel proud of our job as it is a visible example of communal harmony existing in the Muslim-majority Malappuram district, which is often misunderstood and misrepresented,’’ he said.

Salam, a lotus trader, said some temples in southern Kerala buy flowers from Thevala in Kanyakumari district of Tamil Nadu at higher prices. In the open market, the average price of a flower is between Rs7 and Rs10. Salam claimed the prominent temples prefer to acquire high-quality flowers through them as they charge a mere Rs2 per piece.

While six rich families in the village own the wetlands, young members of 50 other Muslim families in the locality work as labourers to pluck and transport the flowers to the temples. Musthafa informed the community supplies an average of 20,000 flowers every day to various temples. Due to rising demand, they have started extending their network to places like Bengaluru, he added.

Monetary returns in this line of work are moderate but regular, say the villagers. As the demand is steady, there is no market fluctuation like in the case of other farm products. The involved families get a steady income regularly. “It’s God's own business, and we are proud of that,” said PK Hamza, a driver delivering flowers to Guruvayur temple every day.

He added that while the returns are low, the goodwill it has created between the two communities is enormous.

No one knows when this Muslim village started supplying flowers to Hindu temples. According to popular belief, priests of the ancient Navamukunda Temple told Muslims living around to start cultivating lotus plants.

Gopinath Parayil, a Kochi-based tourism specialist, said only a few devotees know that the lotus used in all major temples across the state for centuries are farmed by families belonging to the Islamic faith. “In this age of extreme mistrust and hate-mongering, the villages remains a powerful icon of harmony. You can learn many lessons of peaceful co-existence here,” he said.