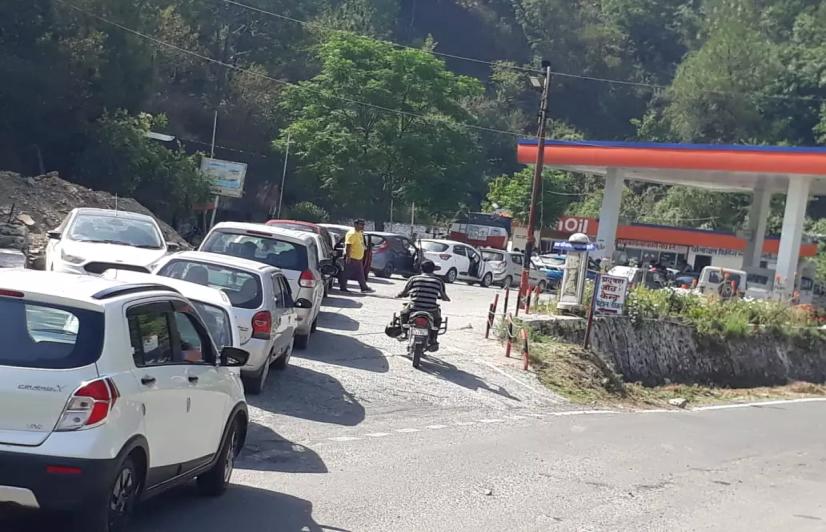 Every year scores of pilgrims flood Uttarakhand to take part in the pilgrimage circuit. The Chota Char Dham Yatra comprising Yamunotri, Gangotri, Kedarnath and Badrinath starts in May and goes till the month of October. Being part of an important Hindu pilgrimage circuit, every political party that has come to power in the state has promised to make it an ideal tourism and pilgrimage state, but the ground reality shows a different picture.

In the current season, the state government’s preparedness has been exposed. Traffic jams stretching for hours, agitated locals and irate pilgrims protesting mismanagement by the government have become a mainstay on the way to these pilgrimage sites. More than two dozen people have died of cardiac arrest in the first month of the pilgrimage, including Shivnarayan Meena, a former minister in the Madhya Pradesh government.

Before the results of Lok Sabha elections, Prime Minister Narendra Modi visited Kedarnath and stayed in a cave for a night. The attention it got was supposed to help improve the facilities for the pilgrims. The traffic congestion on the route often leads to the pilgrims being stuck for six to eight hours.

To reach Kedarnath and Badrinath shrines, one has to travel through Rishikesh on the national highway passing through Devprayag, Srinagar and Rudraprayag. Manish Sharma, a pilgrim from Uttar Pradesh, said he was stuck in traffic for more than eight hours along with his wife and child. Later on, he had to stay for three days owing to the unavailability of air tickets. Private helicopter operators were charging more money than specified by the state government, he alleged.

Aman Kalra, a pilgrim from Gujarat, said he was stuck in traffic for 10 hours, on his way to Kedarnath. Meanwhile, there was no petrol available at filling stations and ATMs didn’t have cash.

Vipin Goswami, a hotel owner in Sitapur, said many devotees return without seeing Kedarnath, because of the mismanagement and long queues to avail helicopter services. At the same time, the lives of local people had also become problematic owing to the traffic jams, he stated.

While the absence of proper traffic plans and other arrangements at the government level has aided to the chaos, the ongoing construction of the All-Weather Chardham Highway Project is also causing massive traffic pileup as work of road widening and safety retaining wall is in progress. There is also an increase in the influx of pilgrims to the hilly state. So far, approximately 18 lakh pilgrims have visited the spots, out of which over seven lakh people had visited Kedarnath by June 19.

As the echo of chaos in Kedarnath Yatra became more pronounced in Delhi and after the devotees protested against the state of arrangements, Chief Minister Trivendra Singh Rawat asked for a report from the District Magistrate (DM) of Rudraprayag, in which Kedarnath falls.

Mangesh Ghildiyal, Rudraprayag's DM, reached Kedarnath and took cognizance of the issues faced by the pilgrims. He also visited Gaurikund and Sonprayag, which fall on the way to Kedarnath. He said he found some problems in police arrangements, while he was visiting Gaurikund's market, and directed the Superintendent of Police (SP) to take necessary action to solve the issue. At the same time, he ordered the sector magistrates to report to him about the arrangements every day.

Satpal Maharaj, the state minister for tourism, said since pilgrims are coming in larger numbers than the previous year, hence the arrangements were insufficient, especially traffic arrangements on the highway.

Utpal Kumar Singh, the Chief Secretary with the state government, took notice of the issue after being hit by traffic on the Char Dham road. He convened a meeting of top police officers and secretary of the disaster management in June and reviewed the arrangements of traffic, cleanliness and availability of drinking water on the travel route.

Singh said he instructed the DMs to improve traffic circulation through the help of Prantiya Rakshak Dal and Home Guards for the next two weeks. Special arrangements should be made in bottleneck points for the smooth flow of traffic, he added.

Ashok Kumar, Additional Director General of Police (Law & Order), said adequate arrangements were made, but the visitors came in numbers more than expected.

Apart from this, many cases of cheating by helicopter companies have been reported. Many a time, pilgrims are not given a ticket even after paying a huge amount and the pilgrims' money is also not refunded.

Ajay Kumar Singh, Rudraprayag's SP, admitted that while 16 such cases have been reported so far, many agents returned the money of the pilgrims. In six cases, the police have filed cases, the SP informed. He said the bank accounts, which belonged to the accused, have been frozen.