Near the LoC, Hindus and Muslims look after each other’s deserted temples, mosques 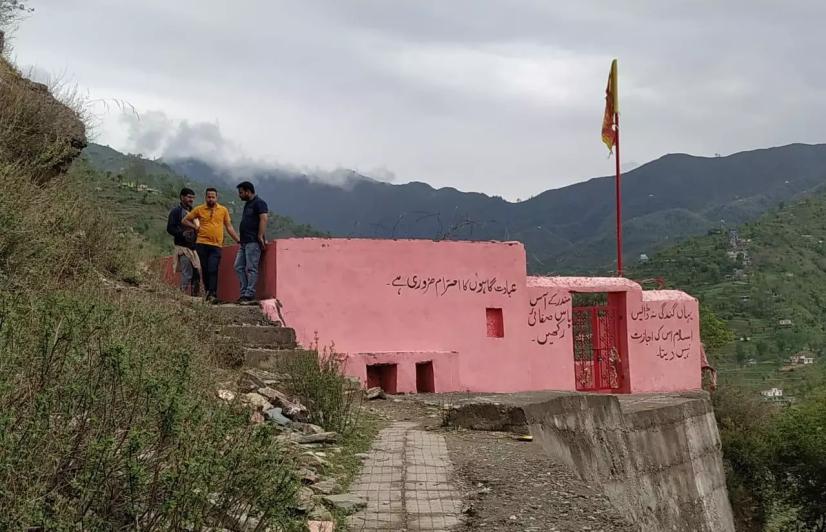 In old Thanamandi area of Rajouri from where the Hindu population fled during the time of armed insurgency in the state, lies a temple of Goddess Durga. Mohammad Firoze Khan, a devout Muslim, cleans the temple every week and makes sure that there is no encroachment on the land.

Khan has also written in Urdu on the wall of the temple that the area should be kept clean. “Islam doesn’t permit us to throw garbage and dirt in the religious places of others. We have been told by our religion to maintain cleanliness” said Khan while adding that few locals some years ago tried to encroach upon the temple land but were stopped by the elders of the village who had seen Hindus in the area before Pakistan-backed terrorism broke out in the state.

Khan pointed out that when they were kids, it was common to attend marriages and celebrate Eid and Diwali together. “However, in 1989 with the start of armed insurgency, the area became a hotbed of terrorism, and the minority Hindus fled and settled in Jammu and main Rajouri town” added Khan.

Thanamandi is located along Mughal road that was used by the Mughals to reach Srinagar. The road is now used by vehicular traffic to enter Kashmir region. The region became a haven of terrorists who crossed over from Pakistan into the Indian side and used to hide in the forest areas. Sensing the shift, the Hindu population fearing for their lives fled to safer areas from Thanamandi.

Many elders in the area tell the tales of communal harmony that was prevalent during pre-insurgency days. 72-year-old Rashid Shawl, a former government employee, said that not only in weddings but Hindus and Muslims even shared grief when someone died. “Muslims used to go to crematoriums to attend last rites of their Hindu friends and Hindus used to visit burial ground for the same. It was only after terrorism broke out that our friends had to leave the area. However, an ancient temple of goddess Durga is still here, and we are taking good care of it” Shawl told 101Reporters.

Not only the Muslims of Rajouri but even Hindus in Nanihal of Nowshera sector of the district are leaving no stone unturned to preserve the social fabric. A mosque in the area lying close to Line of Control (LoC) is taken care of by the Hindu families after the Muslim residents left the village during the partition of the country in 1947.

Kanta Devi and her son Ravinder Kumar take care of the mosque that lies in a dilapidated state as no one visits it. Kanta cleans and removes the weeds that grow near the mosque every month. She said that people rarely visit the area and are not bothered in the upkeep of the religious shrine that was left by Muslim brethren.

“There have been instances when I was asked by some persons from right-wing organisations not to take care of the mosque. However, my husband Puran Chand earlier took care of the building, and after his death, I am doing the same” said Kanta Devi. She revealed that in 2016, some Muslim men had come to the mosque and even offered prayers but never returned.

Nowshera sector is a continuous victim of ceasefire violations by the Pakistan army and many deaths of civilians including Hindus and Muslims, have been reported from the area. “There is enmity between two countries (India and Pakistan) but why should I make this a problem between two religions,” asked Kanta.

Hilly Rajouri district of Jammu region had remained a hotbed of terrorism during the 90s after which several operations were launched by security forces to eliminate ultras. The district due to its proximity to Pakistan has also remained on the radar of terrorists for the communal harmony witnessed in the area. There have been attempts in the past to flare up communal passions of communities. However, those failed without much damage.