‘Muslim revenge on Hindus’: How sections of the Kannada media communalised the Mangaluru airport bomb scare 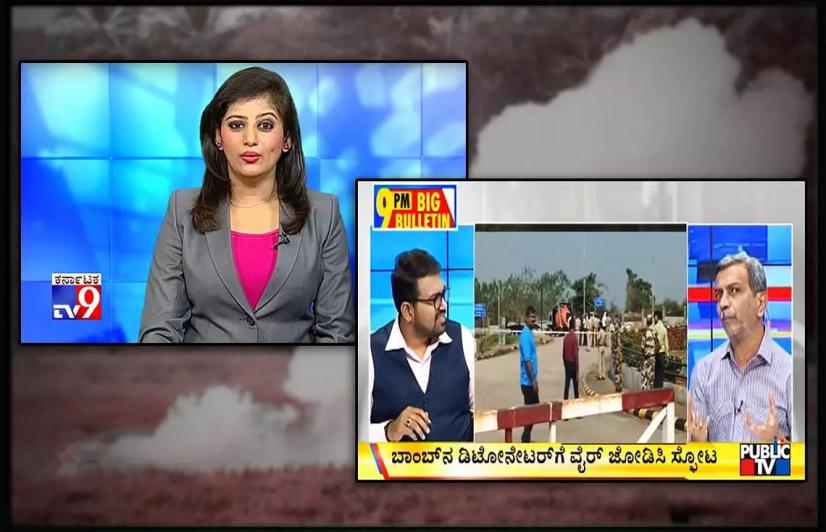 Mangaluru bomb scare: How the Kannada media reported it

The Mangaluru bomb scare incident  this week showed the real face of many TV channels and newspapers who always look at the news through the lens of religious, political and communal bias instead of the prism of journalism ethics.
After an abandoned bag filled with explosives was found near the ticket counter of the Mangaluru airport on Monday (January 20) Kannada newspapers and TV channels jumped at the opportunity to cover this incident. Some of these publications didn’t even shy away from terming the bomb scare being linked to Islamic terrorism without getting any confirmation from the police department.
As expected, Kannada TV channels such as TV9, Public TV, Suvarna News, Power TV, Kannada News 18, Kasturi TV and Praja TV showed the live telecast of the controlled ‘bomb detonation’. TV9 Kannada, Public TV, Suvarna News and Kannada News18 were ahead in their reportage of the bomb scare and the efforts by the law enforcement agencies to control the situation. But other channels like Power TV, Praja TV and Kasturi TV lagged behind owing to the shortage of staff and other resources.
During this entire episode, most of these channels followed the same narrative hinting that the Muslim community is taking revenge for the recent police shooting and, the Citizenship Amendment Act (CAA), National Population Register (NPR) and the National Register of Citizens (NRC).
However, when Aditya Rao surrendered in a police station taking responsibility of the abandoned bag, the tone of the coverage shifted and the programmes focused on how Rao was mentally unstable and unemployed.
On Monday, TV9 Kannada’s telecast focused on the events as they unfolded, first about the unattended bag and then how it contained a live bomb. Suvarna News described it as the most dangerous bomb in the history of the state. The channel also gave wide publicity to Udupi mutt chief’s demand for stringent punishment for those who planted the bomb at the airport. Later, Public TV did a detailed report on how the bomb squad managed to deal with the bomb.
Majority of the Kannada channels had a live telecast when the accused Rao surrendered to the police in Bengaluru and how he was taken to Halasuru Gate Police Station and later to Victoria Hospital for a medical check-up.

Newspapers follow footsteps
Even the newspapers weren’t behind and would ape the stance taken by the regional news channels. Before Rao’s surrender, some newspapers even reported that members of the Muslim community were planning to destroy the historic Kadri Manjunath Temple.
After the bomb scare on Monday, Kannada newspapers such as Kannada Prabha, Udayavani, Prajavani, Vijaya Karnataka, Vijayavani, Vartha Bharathi, Hosa Diganta, and Vishwa Vani focused on the recovery of the bag, controlled detonation and a statement by the Mangaluru’s police commissioner Dr Harsha on the security arrangements at the airport.
After Rao’s surrender, newspapers published the statements by politicians, ministers and police officers, and about the 10-day police custody for Rao on the front page and inside pages.
Hosa Diganta, a Kannada newspaper considered to have close links with RSS leaders, carried a detailed report on how the accused is different from other terrorists of the minority community.
The article while claiming that it wasn’t trying to protect Rao’s image like others by claiming he is mentally ill and that no bomb was found near the airport, tried to clear his image by attacking the Muslim community. The piece goes on to explain how Hindu terror doesn’t exist.
The analysis published on the front page of the daily explained the difference between Muslim terrorists and Aditya Rao. It said that Rao had no support from Hindu groups and his family had disowned him three years ago. It also explained how Muslim terror groups are organised, and how their network provides arms to destroy members of the Hindu community. The analysis elucidated how Muslim terror groups provide training to Muslim youth and how Muslim terrorists target particular countries.
According to Hosa Diganta’s analysis, Aditya Rao did not plant the bomb at Mangaluru airport in support of Hindus or to propagate Hindu philosophy. It has also been argued that the act of planting a bomb at the airport couldn’t be considered as Hindu terrorism just because Rao is a Hindu. It also advised former chief ministers Siddaramaiah and H D Kumaraswamy to understand the difference between Muslim terrorists and Rao.
The Friday edition of Vijayavani spoke of how Rao would be kept in police custody for 10 days, while mentioning that investigations will be carried out in Karkala, Bengaluru and Chennai.
The story quoted Dr Harsha saying that Rao planned for this while serving jail time for a similar incident in Chikkaballapur jail for nine months. The story then went on to explain how Rao had carried out the entire plan while residing and working at different places.
After Rao surrendered, even the newspapers shifted their tone and raised ‘important’ questions on things such as the weight of the bomb, the depth of the pit where the controlled detonation took place and the link between CAA and the bomb.
Udayvani even said that Rao used to help the government in finding security loopholes, while several other respectable media houses had said that his actions were born out of the fact that he wasn’t considered for a job at the Mangaluru airport.
After the surrender, the daily Vartha Bharati explained the court proceedings and talked of Rao’s background.
Kannada Prabha, Vijayavani and Hosa Diganta are believed to have a soft corner towards the ruling Bharatiya Janata Party (BJP). Kannada Prabha is owned by BJP MP Rajeev Chandrasekhar while Vijayavani is owned by former BJP MP from Hubli-Dharwad, Vijay Sankeshwar.