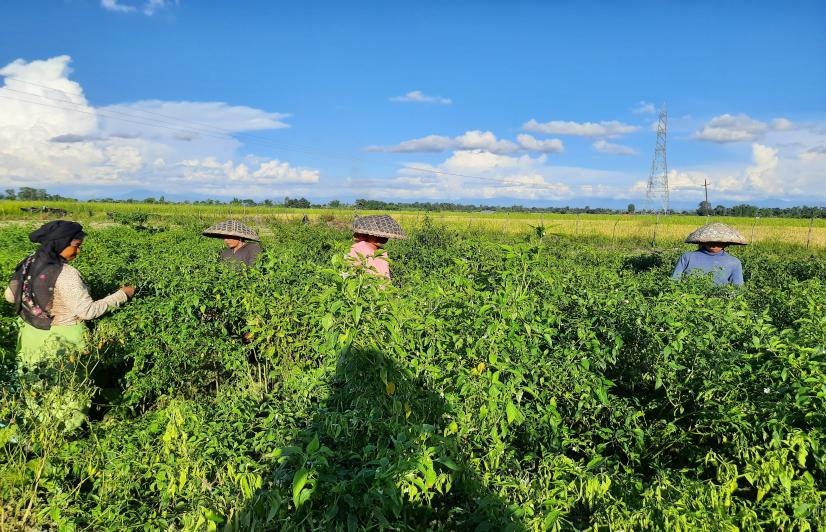 Bishnupur, Manipur: For the farmers of Kwasiphai in Manipur's Bishnupur district, there seems to be no end to their troubles. They were looking forward to a good harvest from their first cycle of crops this year. Kwasiphai and two other villages, Khoijuman Khullen and Toubul, contribute over 30% to the state's total vegetable production but are reeling under the COVID-19 pandemic and the subsequent lockdown. Additionally, the police station near the agricultural fields only added to the woes of the farmers, who claim to be under the strict surveillance of the police.

Moirangthem Eni, 28, and her husband Somesh, 28, cultivate vegetables on a sangam (a traditional unit of land measurement, 1 sangam~0.625 acre) of leased land, with one loushal (1 loushal~0.15625 acre) earmarked for paddy as they have to pay it to the landowner. In the rest of the land, they cultivated tomatoes, cucumbers and okra. With money borrowed from moneylenders, the young couple claimed that they spent over Rs 50,000 in growing these vegetables. However, as the state went into complete lockdown along with the rest of the country towards the end of March, the couple watched helplessly as their vegetables primed for harvesting were left to rot in the field.

Moirangthem Somesh and Eni at their newly tilled land where they plan to grow pulses this time. Credits: Armstrong Chanambam

With the curfew imposed, no trader could visit the village to buy the vegetables and they were forced to dump the vegetables in the field, Eni recounted.

Moreover, owing to Kwasiphai’s proximity to the Bishnupur Police Station, many farmers claimed that the agricultural labourers, who help out in the harvesting process, couldn’t venture out during the curfew.

Even those who managed to hire help for the harvest during the lockdown, with the expectation of selling them promptly, suffered as no trader could get past the police checkposts nearby and enter the village, Eni said.

In a nearby field, Haobijam Reshma, 34, also incurred losses after failing to find buyers for her peas and kidney beans. She reportedly spent Rs 30,000 in growing the crops but failed to recover the money spent. She was left with no choice but to sell the vegetables inside her village at throwaway prices in huge quantities.

Landowning farmers such as Naorem Subol, 47, fared no better. He owns two sangam of land but has also been farming on another sangam on lease. He paid a rent of Rs 1.4 lakh for three years. He is unaware of the actual loss he had to incur but estimates that it is about Rs 1 lakh. He said he managed to sell his produce wholesale whenever there were few hours of curfew relaxation.

Subol also revealed that he lost all his cauliflower crop when the government further extended the lockdown in August.

"Most farmers are reluctant to admit that they have suffered losses. I gave away my agricultural produce to traders without even bothering to take the advance. I had a difficult time collecting money from them and barely managed to take a lump sum amount of Rs 30,000. Most farmers I know here must have lost over Rs 1 lakh [each] during this pandemic," Subol confided.

From March to May, most farmers suffered a lot and ran helter-skelter without any idea of what they should do, Subol stated.

The police strictly enforced the lockdown and those who ventured out of their homes with the intention of visiting their fields were being chased away with lathis and as the police station is located nearby, the village was prone to frequent police raids, he reminisced.

Traders like Irengbam Apabi Devi, who is a resident of Kwasiphai, used to sell vegetables procured from the village at Moirang Bazaar, an important market in the district. She rued that the global pandemic has not only affected them but also discouraged the farmers from continuing with their agricultural activities.

(This article is a part of a series on Covid’s impact on India’s marginal farmers. The series has been funded by Internews Europe.)