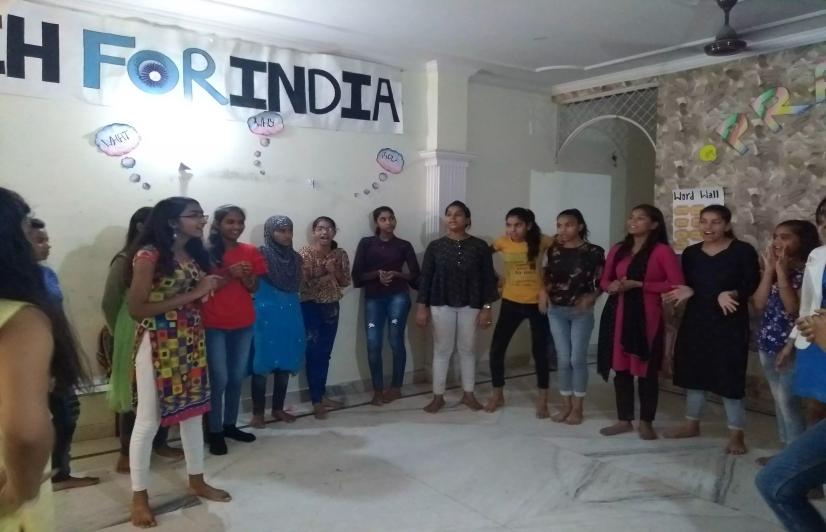 The scorching sun pushed its way through Prahladpur—a low-income community in Delhi which is known for its festive market. Close to a man frying piping samosas in a pan of oil, many kids decorate the walls of a residence with origami butterflies. Also known as Khoj Basti by its enthusiasts, the learning space was founded three years ago by a social worker at a government school in Prahladpur. Since then, it has been maintained by the students of the school. At a corner, Nandini Kumari, an 11th grader, sits in a room populated with teenage girls.

“What is the worst possible name have you seen people using for a woman?”, she asked the crowd at the beginning of the session. The emotions in the faces fluctuate between confusion and disappointment.

With a population of over 47,000, Prahladpur is surrounded by Lakkarpur and Lal Kuan and hosts a diverse range of locals and migrants from several religions, castes and genders. Although it has wide streets and efficient transport connectivity, it struggles with innumerable social challenges.

“Girls are often victims of restrictions, stigmas, and are never considered to have an opinion.”, says Varsha Rani, 16, a resident. She claimed every woman faces sexism, but the suffering of women depends on how developed or dangerous the area is.

Varsha revealed that people from a certain religion live in a certain part of the area—people of Muslim faith live in Mula Colony. She also pointed out that families from upper castes don’t share water bottles with sanitation workers.

Santosh Jadon, a resident and shopkeeper, said there are a few obvious differences between men and women in the area. “For instance, a girl coming back home late is usually frowned upon. But these [gender biases] are normal because they happen everywhere.”

Nandini feels the Bollywood culture, which objectifies women, has led us to the present situation. She started Nazariya in 2018 to understand the unexplored perspectives of biases and raise awareness about the inequalities of society. Apart from conducting awareness campaigns for the community, Nazariya also conducts self-help workshops for the girls.

Jyoti Singh Chauhan, a 15-year-old resident of Lal Kuan, believes voices can be expressed in many forms. In 2018, Jyoti started Gurukul, which is an initiative to let every child express themselves through art, dance, theatre, music and poetry.

She mentioned that she had the opportunity to study in an English-medium school, but there are many who can’t. She also added that they might not be able to pay for learning extracurricular activities. She revealed that Gurukul is meant to cater to kids from all types of schools and bridge the inequality, which has been created by choices of education.

“Gurukul is for everybody. Every child deserves to find their voice,” added Jyoti.

With gradual support received from peers to build teams, today, both Jyoti and Nandini impact close to 300 kids, of which 98% are girls. Many girls consider Gurukul a platform to question and express, claimed Jyoti. Whether it’s weekly vocational sessions led by Gurukul or Nazariya’s awareness campaigns, Khoj Basti is the roof that shelters the stories.

Anchal Tiwari, a student of class eight from Pehladpur, is learning music at Gurukul. She credits the project for her confidence as she can express her feelings here without any judgement.

While she always liked writing poems, 13-year old Arpita Tiwari felt more validated about her habit of penning down her feelings after attending reflection sessions at Nazariya. Her poem, Pyaar (love), which she feels is a milestone in her protest against the communal mindset that dismisses a girl’s feelings related to affection and fondness.

The occasional celebrations by the groups have poetry, street plays, dance, and music addressing real-time issues of the community. Over 150 residents have attended separate open mics and ceremonies by members of the projects including the parents, informed Jyoti.

“The amount of love my Chanda has received from Gurukul and her school is massive,” said Maida Begum, the mother of 16-year-old Chanda Parveen, who has been raising funds for Gurukul's expansion, supporting Jyoti with event management and participated in music and dance sessions at Gurukul.

She believes that the children organising events is key to their rising confidence. But ever since other parents in the community have seen the impact, she revealed, they are more confident of their daughters and flexible when children come home late at night.

A very unusual movement that it is for Prahladpur, the girls have often faced hurdles on their path but nonetheless, Jyoti talks how they have to increase the impact.

Gurukul is planning to expand to more communities so that they can benefit the entire cluster surrounding the community, revealed Jyoti. Nazariya, on the other hand, talks about deepening the magnitude of its impact within the community of Prahladpur to erase gender biases from the community.

Nandini mentioned that members of Nazariya are now conducting surveys in Prahladpur on gender gaps and their solutions. They are also slated to conduct one-day workshops in different schools of New Delhi with the help of an NGO. Nazariya also has a YouTube channel where upload content relevant to sensitisation towards marginalised communities.

Empowering Women in India: Need for a Feminist Agenda, a paper by Devendra Kothari—a population and development analyst—argues that legal measures and policing will help reduce crimes against our women, but the only thing that can eliminate patriarchy is women-centred ownership of opportunities and change in mindsets.

As the session is coming to an end, “What is the worst possible name you have seen people using for a woman?”, Nandini asked again. The girls start throwing responses—‘prostitute’, ‘slut’ and ‘whore’.

Finally, as these adolescents attempt to sensitise the world against inequality, the sound of a feminist tale popping in a cauldron can be heard nearby.