India's river children: where they go to school on cooking pots 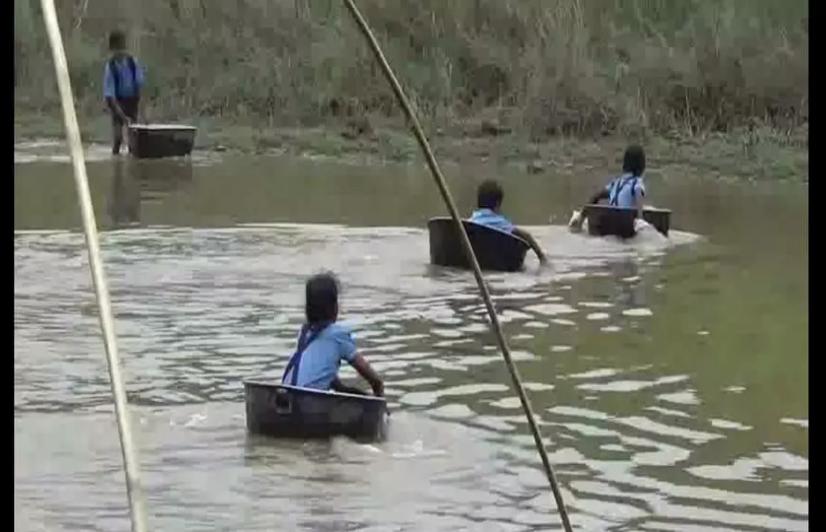 Guwahati, Assam: Not in a school bus, not a van or even a country boat. These children in India’s far-east go to school in cooking pots. About 16 students of a primary school in the Assamese village of Pachim Kuruwati in Biswanath district have to go to school the entire academic year by wading across the river in large cooking pots.

Pachim Kuruwati Lower Primary School in Naduar revenue circle lies near the Ghiladhari river, which is currently in spate due to South-West monsoons. “The river flows from east to west and the school is situated on the southern bank of the river. Around 15-16 students who come from the North have to cross the river every day,” said Jitumoni Das, the head teacher at the school. This government school has 44 students and two teachers.

These students who need to come from the other side belong to the villages of Borbheti and Polokhoni. The primary school teacher too has to cross the river likewise to get to work. In his own cooking pot, he carries textbooks and an extra pair of clothes to change into after reaching the school. And right now, he is the only adult there as the other teacher has been on leave for almost a month.

“I am the only teacher in the school right now. So I never take leave because I also have to keep an eye on the students crossing the river in cooking pots. I have been teaching the students how to swim so they can escape any untoward incidents while crossing,” said Das, who teaches all five subjects for classes one through four.

“I have been telling the parents to teach them swimming as well and also to wait on the banks till the child reaches the other side of the river. Sometimes they are there, sometimes they are not as they also need to go out for work,” said Das.

A majority of the population in these villages are daily wage earners, primarily agricultural. They send their children in large cooking pots that are used to prepare cattle food after school hours.

There is no bridge connecting either side in the vicinity. During the dry seasons, the villagers sometimes construct ‘Xakus’ on the river (a thin bridge made with bamboos), measuring up to 70 metres. But during the monsoons, the river adds at least 100 metres to its width and these constructions get washed away. According to the local MLA of the constituency, Bharatiya Janata Party’s Promod Borthakur, six bridges over Ghiladhari are broken and he has intimated the departments concerned about this. He told 101Reporters he was upset with the local people, and especially the school teachers, for never bringing the situation to his attention.

“When I first heard about it, I immediately sent the Block Development Officer to help the students with a bamboo bridge. It will be constructed at the earliest. I myself was a teacher before I became an MLA and had I been informed by the local people or by the headmaster of the school, I would have never let these students go to school in such risky conditions,” he said.

Taking a dig at the previous Congress MLA of the constituency Nurjamal Sarkar, Borthakur said, “In 2005, he established the school without developing the roads.”

Usman Ali, a student of class four and a veteran of the cooking-pot-crossing who has been doing this since class one, said, “I feel scared when there is rain. But I like my school. I like my teacher very much. I don’t want to miss school.”