How press turned into paparazzi for pretty polling officers 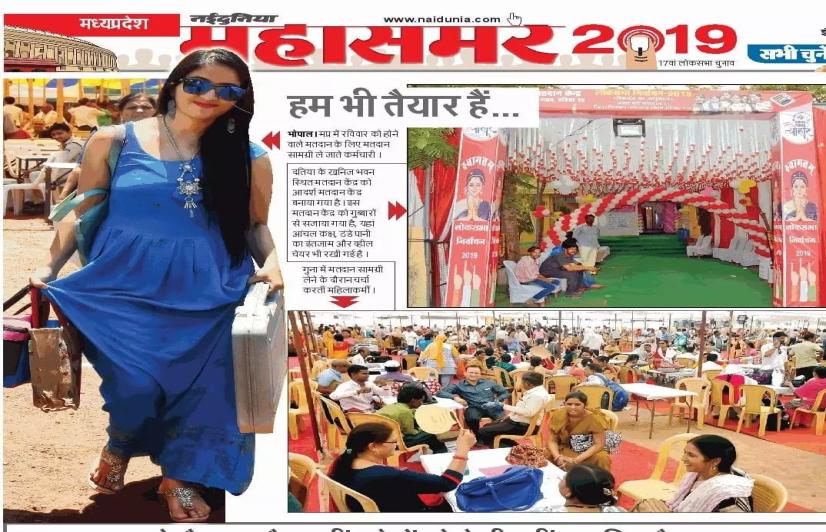 “I saw photographs of the lady and the photo idea clicked on my mind. The same kind of photo went viral a few days ago in Lucknow. I sent my fellow photojournalist Nirmal to take more photos," said Abrar Khan, chief photojournalist of Navdunia Bhopal.

On May 11th in Bhopal, a day before the phase six of Lok Sabha election, the booth level officers had gathered at Lal Parade Ground to collect the EVM machines and received instructions to prepare for the election day. A group of photo journalists took photographs of the polling officers, but one officer stood out the most, a woman officer in a blue dress.

A seemingly normal image of the polling officer, Yogeshwari Gohite, wearing sunglasses and smiling while carrying an EVM machine seemed to have captivated the hearts of many Indians and went viral. During the fourth phase of the Lok Sabha Elections, a similar picture went viral of a female polling officer, Reena Dwivedi, draped in a yellow sari. Due to the viral tendencies of these pictures, newsrooms have started putting pressure on their reporters to hunt for more viral content like this.

When Yogeshwari’s picture went viral reporters were instructed to find every possible detail about the “woman in the blue dress”. Some reporters were even asked to click more pictures of attractive women polling officers. A few media outlets even dug deeper into Yogeshwari’s social media accounts and created photo galleries from images they could find. The photo garnered so much attention that media outlets struggled to hold the interest of the audience with almost little to no information on the subject of the photo. A reporter spoke to Newslaundry on the condition of anonymity, said, “Our editor had instructed us to find the girl in any case. This photo had become most important election assignment for us. Initially we had only few photographs of the girl in which the booth number was not clear. However, other photographers provided some other angles after which we came to know that she is posted at a booth at Govindpura and we went there."

Further talking about merits of the photo, Abrar Khan said, "We take photographs at Lal Parade ground a day before the elections and focus on such faces, either they are happy or sad. Usually we get sad and tired faces of officials, but this lady was dressed nicely and doing its duty with great enthusiasm,"

Till mid-day, reporters were sharing usual information such as voting percentage and information about EVM glitches with their fellow reporters but once Yogeshwar’s photo caught the attention of newsroom editors, on-field reporters were asked to verify information about ‘the woman in the blue dress’.  Reporters started a hunt for the polling officer in the blue dress. Earlier, her booth information was not known but when reporters found out she was stationed at booth number 154 in Govindpura ITI, they rushed there. However, the polling officer denied speaking with the reporters during her working hours and asked them to wait till evening. At least 20 reporters and photojournalist were waiting for the woman to come outside and speak to them.

At first Yogeshwari Gohite was uncomfortable with the sudden attention. She wanted to speak with the reporters but turned then away as she wanted to complete her duty as a polling office and asked then to wait. The reporters were not able to wait till 9pm as they had other election deadlines to meet. A few photographers tried to wait but at the end of the day no one was able to interview ‘the woman in the blue dress’.

This next the day the search was still on, to complete the assignment. The most challenging task was to find the address of the bank that she worked for. "I had talked to her a day before the election and she told me that she worked at a bank. I came to know that she lived near Ashima mall. The bank is also nearby her house. I found her bank, as she was on leave I asked the manager for her address and found her at home." said Deepak Vishwakarma, a journalist associated with Navdunia Bhopal, when he spoke to us about the struggles he faced to find her address.

"She was not comfortable with sudden popularity. Her husband is in Army and he was also not ready to allow us to do an interview. I talked to him over phone and convinced him to allow us to take an interview of his wife," added Deepak Vishwakarma. Other media personnel also reached her home the very next day after polling for an interview.

Yegeshwari Gohite hails from Betul district and works as an officer in Canara Bank. Once the media frenzy calmed down little around her she felt happy about the popularity of the picture. "On the very first day when media people were approaching me to talk to them, I was not aware about the viral post. I came to know about the popularity after completing my duty. The media persons asked me questions to know more about me. I told them about my lifestyle and the ways I use to keep myself fit." She told us that she wanted to utilise this fame and participate in 'Kaun Banega Crorepati' (Who Wants to Be a Millionaire). "Small town girls get little chance to become famous,” she added.

Sharbani Banerjee, a Bhopal-based media professional, has been working for media for 14 years, she said, “As a woman and a media person, I feel highlighting some female on how she looks or what she wears, especially from election booths is disgusting. Renowned channels and newspapers went crazy to have an interview of that ‘blue dress’ girl, who according to them was looking pretty. This mentality could lead a trend where the media will start scanning beautiful nurses, doctors and teachers. This is a very sexist way to judge a woman. I feel these types of stories should not be called news. If this trend continues, females will feel more insecure to be judged by everyone. Also barging their privacy is also ethically not right.”

Reena Dwivedi, the polling officer whose picture went viral in Lucknow, said, “I'm very upset with the media’s headlines which claim that I'm a looking glamorous in saree. Now media is taking all things in a negative way. If a woman likes to look nice and wear Indian clothes how can it be glamorous." But she was still happy with the fame, "Most of the media had reported it in a very positive way but some section of media did not take care of my privacy.” she added.

Talking about handling the sudden fame Reena says, "I have been busy taking phone calls since the polling day. Some media people came to my office for interviews and some call me at late night for comments. Today I received few less calls and so I think now things are getting normal."

Veteran journalist Chandrakant Naidu who has been working for 47 years in media organisations such as Indian Express and Hindustan Times said, "Election reporting was not like this earlier. I did not see this type of stories during the course of my career. I think this is happening because of 24x7 news channels and social media. The content not only has to be prominent visually, but also sensational. Social media has a bad reputation because of fake news but also for this type of content where there is no defined line which should not be crossed. This is a debatable issue, is it right to consider content like this as news?"

Commenting on the news value of polling officer in the blue dress, Naidu said, "If you see at the coverage there is no news value in the issue. It is just a fact that a lady is wearing sunglasses and a dress and doing their work. I think apart from getting ‘five W and one H’ for a news story, one thing which eventually should be asked before going for the story and that is 'so what', and that it will make the news."