How poverty forces parents to pawn children in the hinterland

Salem, Tamil Nadu: In January 2012, two brothers Sarath Kumar and Meganathan, who were eight- and nine-years-old respectively, were allegedly sold as bonded labourers by their parents to a landlord in Salem district of Tamil Nadu. This September 30, with the help of local organisations, they were reunited with their parents after a separation of eight-and-a-half years.

Like brothers Meganathan and Sarath Kumar, many poverty-stricken families in Tamil Nadu are compelled to get their children to work or sell them. Experts say that as long as unequal social power structures and economic depravity exist, children will continue to get exploited.

According to data available with the International Justice Mission (IJM), a non-governmental organisation involved in the rescue and rehabilitation of bonded child labourers, a total of 687 children were rescued from brick kiln units in Tamil Nadu in 2014-2019 period.

T Kuralamuthan, head of government and community relations, IJM, Chennai chapter, told 101Reporters that caste and economic inequalities expose the poor to exploitation. “In most cases, people from lower castes own no lands. In an economically advantageous position, the owners of business units in rural areas exploit the poor. Local middlemen, whom the poor trust, are used to lure them into debts. Children are used as collateral and in the event of default in repaying debts, children are taken by the money-lending rich landlords to work in their fields of rural enterprises,” he explained.

“Exploitation is built into the business profit-model,” he commented.

Speaking to 101Reporters, Thangaraja claimed that his children were forcibly taken away by the landlord as he couldn’t repay a loan of Rs 40,000, which he had taken to address a family emergency. He added that he requested the landlord multiple times, but since he had local influence, Thangaraja was unable to do anything.

Belonging to the Boyer community (Scheduled Caste), Thangaraja had no land assets to fall back during difficult times, while landlord Sengodan is from the Vanniyar community (landowning class).

Besides employing people from Scheduled Caste in their farms and other business on a daily wage basis, the landowning class in the western districts of Tamil Nadu engage landless people as bonded workers with meagre wages that would be adjusted for food and shelter. The children of the workers are sent to government schools, but after school hours they work on the farm or do household chores for the landlord.

Thiru K Dass, chairman, District Child Welfare Committee, Salem, told 101Reporters that traditionally, landowners would extend loans to workers for emergencies which would be deducted from the wages. However, as they wouldn’t earn enough to repay their debts they would be forced to work till the debts are paid, he added.

This would usually take a long time as the wages are low and their earnings are adjusted for food and stay, he explained.

Meganathan stated he and his brother were enrolled in a school, but they were made to work in the brick kiln after school. Apart from the regular work, they had to take the cattle to graze, clean their shed and in the owner's brick unit, he added. 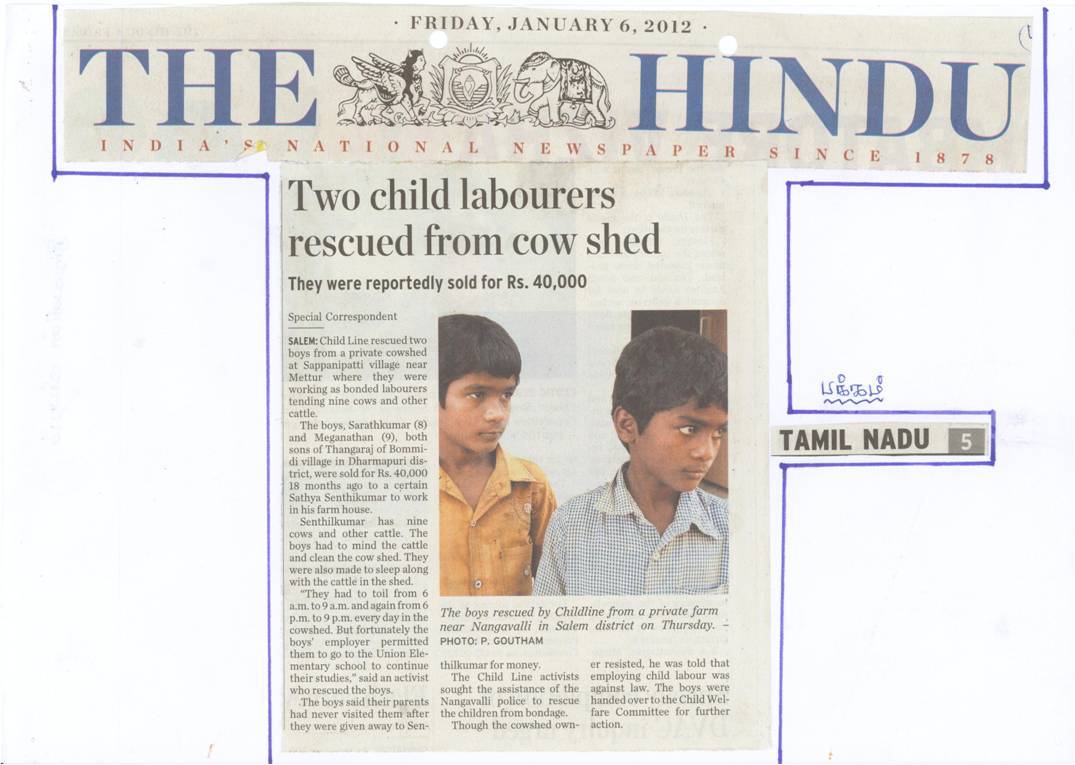 A Newspaper cutting of rescue of Meganathan and Sarath by Childline. Credits: George Rajasekaran

About 18 months into working for the landlord, Meganathan and Sarath were rescued by a Childline India worker and were put up in the Don Bosco Anbu Illam (DBAI) home in Salem, he mentioned.

In September, the National Commission for Protection of Children’s Rights (NCPCR) directed the district magistrates of eight states, Kerala, Karnataka, Tamil Nadu, Andhra Pradesh, Telangana, Maharashtra, Mizoram and Meghalaya, to send the children in the child care homes back to their families within 100 days.

However, Meganathan and Sarath received a basic education, technical skills and life skills at the DBAI home, which could not have been ensured by their parents owing to several reasons beyond their control, stated Father Casmir Raj, Director, DBAI, Salem.

S Shine Thomas, who runs a childcare home and manages a Childline India centre in Dharmapuri district, stated that in the case of children like Meganathan and his brother, more than family circumstances, the socio-economic imbalance caused by landholding inequality and entrenchment of class-caste hegemony in rural India were the main drivers of poverty, neglect and abuse.

The practice of bonded child labour is being perpetuated because people like Sengodan get away with a meagre amount as fine or go scot-free without being booked using their clout in society, and this needs to be addressed to prevent children becoming victims of bonded child labour, he added.