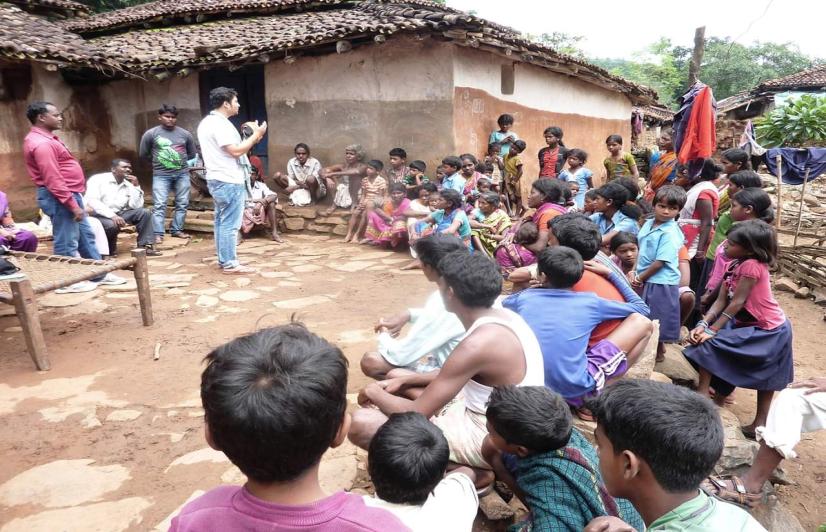 “It is disappointing to see that devotees visit Kamakhya temple in a huge number to offer prayers when the goddess Kamakhya is menstruating but they do not take care of the women who are menstruating in their own homes,” said Mangesh Jha, who is often referred to as the Padman of Jharkhand.

Leaving a well-paid job in the hospitality industry, the 30-year-old is on a mission to spread awareness about menstrual hygiene in the tribal belt of Jharkhand. With relentless efforts over four years, Jha has managed to bring about a change in the lives of about 1,500 families in and around Ranchi, encouraging women to follow hygienic period practices.

It was a shock for his family when he, a graduate in Hotel Management from Institute of Hotel Management (IHM), Bhubaneshwar, decided to quit his job and work with tribal population. More so since he had till then been working with big brands like Oberoi Grand, Kolkata, Marriott, Pune and Radisson Blu, Ranchi

“My mother did not talk to me for seven days when I told her that I quit my job and am going to work towards spreading awareness on menstrual hygiene in villages,” he said.

The transition
After graduating from IHM in 2009, Jha worked with two big hotel brands in Kolkata and Pune before moving to Ranchi to work with Hotel Radisson Blu in 2013. Ranchi being a new city for him, he decided to search the internet about life in the region.

“The internet painted a rosy picture of forests and sceneries and I was more than excited to move to Jharkhand. However, on arriving here I found that the reality was different,” he recalled.

He started visiting the villages on the outskirts of Ranchi and interacting with villagers on weekends. This is when he came across the many problems faced by them. He shared two incidents that had a huge impact on him and compelled him to quit his well-paying job and devote his time to improving the lives of villagers.

“I came across a woman who was drinking hadia [locally brewed rice beer] and feeding it to her little child too. I asked her why she was doing this and she said she was a daily wage earner but she was not able to go to work for two days and had nothing to eat or feed her child. She said she was pregnant with a second child and this was her only option to get to sleep peacefully without food,” he narrated.

Another incident was when he came across a farmer who had banned menstruating women from working in the field. “I started talking with the women about the problems they faced and gradually when they opened up a bit the topic moved to practices adapted by them during menstruation,” he said.

Shock discovery
Jha discovered that most of these women do not even use cloth but relied on the use of grass, ashes and cow dung mixed with husk as pads.

“It was then that I decided to take up the initiative of making women aware about hygienic menstrual practices,” he said.

Citing the latest data of National Family Health Survey, he said 82.1% women in Jharkhand still follow unhygienic practices. The alarming situation of sexual and reproductive health among youth, particularly adolescent girls, also reflects in a UNICEF study conducted in Jharkhand in 2015. The survey revealed that 71% girls reported that their mothers imposed restrictions on them during periods. Also, 32% girls knew nothing about menstruation before its onset.

Further, 67% of the teachers surveyed believed menstruation is a way to release body heat and the blood released is impure. Also, 80% did not know the importance of washing the menstrual cloth to kill germs.

The journey
It was in 2015 when Jha finally decided to take up the work of spreading menstrual hygiene awareness and quit his job. “The pads were very expensive, I could not buy them and distribute among women so my mother stitched a few pads for me in the beginning,” he said.

However, the journey of convincing people was not easy. He faced resistance from the villagers at some places. “Women would not want to talk about it or refuse to take the pad I was distributing,” he said.

Getting people to talk about periods and hear him out turned out to be a big challenge. “To make them comfortable, I would start by telling that it is a very natural process and my mother and sister too go through it. It is nothing to be shy or ashamed of. Gradually, they would understand and then I will tell them the problems caused by unhygienic practices, like urinary tract infection and reproductive tract infection.”

When the women started listening to him, he told them to use sanitary pads or if they cannot afford it, then to use clean cloth. “I would make it a point to tell them that they should ensure that the cloth is washed properly and dried in sunlight instead of being hidden away in a gloomy, dark corner,” he said.

Yielding result
The efforts of over four years paid off and women started taking his advice seriously. “Today, women of around 1,500 to 2,000 families in the villages on outskirts of Ranchi have taken my advice and are following hygienic practices. Many of them are also supporting me by spreading the word at their level,” he claimed.

Pramila (name changed), a girl in her 20s from Rasabera village on the outskirts of Ranchi, said, “Earlier we used grass during periods but dada [Jha] told us about the health problems it can lead to. He gave us a few pads to use. Initially, we were not comfortable using them but now I believe that it is the best thing to do and it has actually brought about a change in the lives of all the girls and women in our village.”

Currently, Jha is working with Niine, a sanitary pad-making company, and plans to install sanitary pad vending machines in schools, police stations, bus stands and other such public places frequented by women.

He hopes to get sanitary pad vending machines installed in long-route trains as well. “You would have noticed that there are no female TTEs in long-distance trains. In such situations, a passenger cannot seek help from anyone if she needs a pad. If a vending machine is installed in these trains, it will prove to be very beneficial for the women travelers,” he opined.