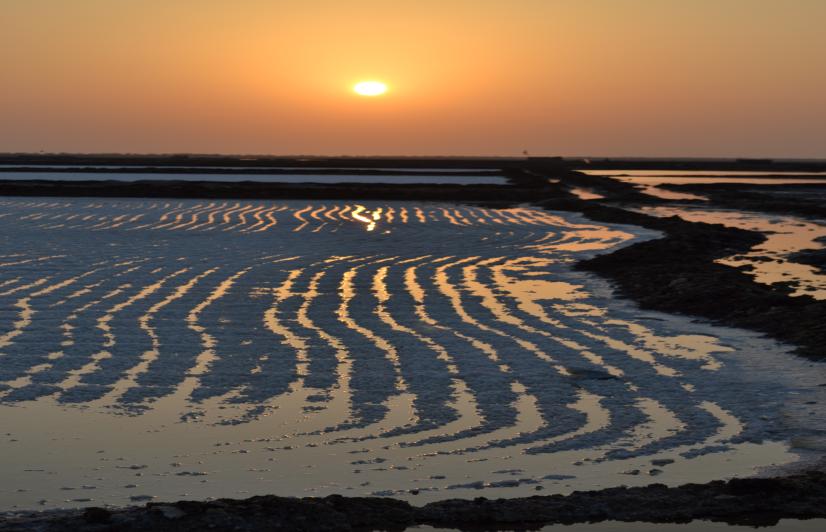 Gandhidham (Gujarat): Forty-five-year-old Narubhai Koli, a traditional Agariya (a salt farmer) in Gujarat, is confused at the current state of the salt industry.

Koli, a resident of Santalpur village in Patan district, was told by the salt trader, to whom he sells his produce, that there is a slowdown in the market and thus, he won't be able to buy more salt while leaving Koli clueless about the situation.

The trade war between the U.S. and China has hit the salt industry in Gujarat, the primary salt producing state of India and also the home state of Prime Minister Narendra Modi.

Stakeholders say the trade war is bringing Gujarat’s export figures down owing to the slump in demand from China, the largest importer of salt from India. China’s chemical factories, which are the biggest importers of salt, have cut down on purchases as the demand for their finished products have come down because of increased tariff on it by the US.

Like Koli, numerous salt farmers, though feel the hit of slowdown, aren’t aware of the implications of the ongoing US-China trade war and how it has impacted their livelihood, highlighted Harinesh Pandya, founder of Agariya Heetrakshak Manch, an NGO which works for the welfare of small salt farmers.

He added that the salt farmers stay at Little Rann of Kutch for almost eight months (The area remains submerged in water for the remaining four months during the monsoon) with families in extremely difficult conditions to generate yield. Each family has been allotted 10 acres of land by the government to produce 2,000 to 2,500 tonnes of salt annually to earn Rs 50,000-70,000, he said.

Pandya explained that the US-China trade war has caused a considerable fall in exports to China, the largest importer of Indian salt. “Due to this, the stock has increased and the salt farmers, who were almost 30% of the total workforce of over 2 lakh in Gujarat salt manufacturing, sold their produce to the bigger traders. They already live in miserable condition and face a lot of hardships for the production of salt and to earn a petty income. This trade war caused export decline is bound to have the worst impact on them,' he asserted.

BC Raval, president of the Indian Salt Manufacturers’ Association (ISMA)—a 70-year-old body of salt makers comprising big names such as Tata, Birla and Nirma—said the salt China buys from India is used to make caustic soda, soda ash and glass. He said the industrial salt is also used in the detergent and textile industries there. Some of the other industries that need it as a raw material are case-hardened steel, rubber, brass, paper, plastic and polyester.

As the demand for these Chinese products declines, so does the demand for the raw materials used to manufacture them. A study released by the United Nations Conference on Trade and Development (UNCTAD) shows US  imports from China subject to tariffs fell to $95 billion between January and June from $130 billion during the same period of 2018. Salt makers of Gujarat apprehend that owing to the declining demand from China, the export figures of the state might see a notable decline.

ISMA vice-president Shamji Kangad told Forbes India that export to China has already come down to half the normal level. He is a director of Neelkanth Salt and Supply, a Gujarat-based company that deals with manufacturing and exporting salt.

He said the demand from China dropped by about 0.5 million tons between January and June in total and dipped by the same amount in the month of July itself. August saw the demand declining by another 0.2 million tons. He said currently Gujarat’s salt makers are exporting 1.5-2 million tons to China. The export revenue has come down to Rs 100-150 crore since January.

“For the rest of the year, we assume another fall of around 0.4 to 0.6 million tons in exports to China,” added Kangad who is also the secretary of Kutch Small Scale Salt Manufacturers Association.

Rains to the rescue?

Huge mounds of salt kept in the open are visible at the production sites in coastal parts of Kutch district and adjoining areas due to demand slump. However, despite the bleak export scenario with regard to China, the unusually heavy rain in Kutch region of Gujarat, has played a saviour of sorts for the salt industry in the state.

The heavy rain during September in the otherwise rain-deprived Kutch region this year has washed away a substantial portion of the salt stocks kept in the open. This has not only improved the quality of the salt by washing away impurities like magnesium but also balanced the stock.

Laxman Tejabhai Ahir, the owner of the T M Ahir Salt Works in Moti Chirai village under Bhachau taluka of Kutch district, stated that Kutch received about 25% of the average rainfall last year compared to the current year’s 160%. As there was limited rainfall last year, most of the stock could not be washed and the quantity remained high and as the exports to China went down, the stock increased during July and August, he added.

However, he asserted that due to heavy rains in September, a good amount of salt stocks have been washed and the normal production period is also likely to be delayed by a month or two owing to the extended monsoon.

The Executive Director of Ankur Chemfood, a major processor and packager of salt with its plant in Kutch district, Abhishek Parekh, told Forbes India that due to rains, a substantial portion of the piled-up salt has been washed away. This, he said, has made the salt purer and thus costlier. Also, the total stockpile, which had increased due to reduced exports, has come down. As the magnesium content in the salt has reduced by four to five times due to the rains, clients purchase it at a higher cost, as their purification costs come down significantly, he explained.

Apart from this, the production this year due to prolonged rain would start from December-January rather than November and this would also give salt manufacturers some buffer time to adjust the stock, he said.

Every year, about seven million tons of salt is used for domestic purposes and another seven million is utilised by Indian industries, mainly caustic soda manufacturers.

Kangad highlighted that prices of crude oil and shipment freight could adversely affect the exports. He explained that the crude oil rates had increased up to $66 per barrel and caused a subsequent rise of $5 to $6 in the freight per ton for shipment from Kandla port in Gujarat to China, due to which the exports had also become nonviable. He predicted that if the US-China trade war continues for a longer period, the crude prices can go up to $70 a barrel, which would be a big problem for the industry.

He added that China had also looked for cheaper alternatives from countries like Australia, but luckily the oil rates came down.

Raval predicted that the production next year is expected to be around 30% less than the normal figure of around 23 to 24 million tons in the state. He said the salt exported to China is normally priced at Rs 500-800 per ton while the raw or low-quality salt is not exported. He informed that Japan takes 90% of its total imports in the form of high-grade salt, while China imports 50% of high-grade and 50% medium-grade salt, which it uses for industrial purposes.

Demanding export incentives for the salt-manufacturing establishments, Kangad stated that the salt industry has provided jobs to a large number of people despite the low-cost product and comparatively smaller turnover. Apart from export incentives, he added, the procedure for lease renewal should be looked into as they are a time-taking and tiresome exercise. He noted that firms are given a two-year lease which prevents them from having a long-term export agreement.