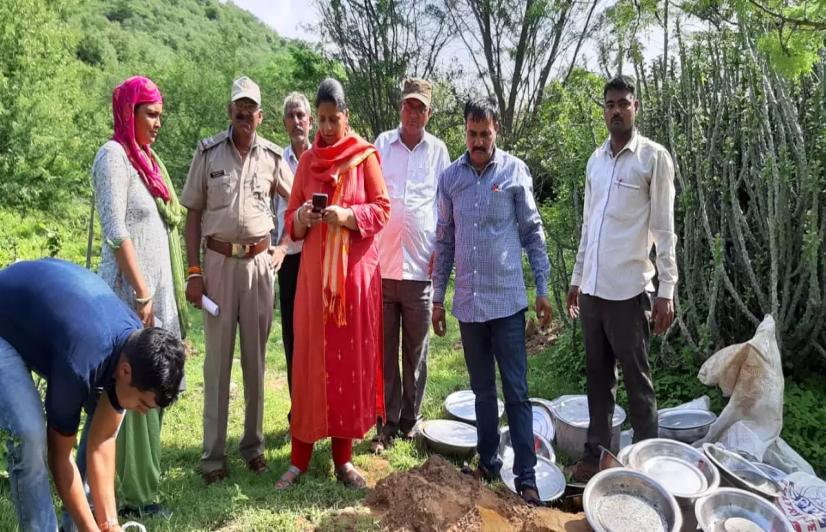 Ajmer, Rajasthan: While a sting from the poisonous tail of a scorpion is enough to knock the living daylights out of you, now these scorpions are becoming prey to the ‘human sting’. Scorpions are the latest victims of human greed in Rajasthan’s Ajmer. According to forest officials, oil extracted from the scorpion, used to improve libido, is in demand in numerous foreign countries; multiple inter-state gangs are involved in the operation.

The practice of frying live scorpions to prepare the oil was started around Kolkata in West Bengal and spread to other areas, including foreign countries.

On August 8, the forest department busted a scorpion oil business in the Amba Bawdi Akbari Masjid area of Ajmer. Forest department ranger Mohanlal Sambharia, with the other members of the team, raided a quack’s establishment and recovered 10,000 dead scorpions and about 60 litres of scorpion oil. Salim, the caretaker of the shop, informed the police that the business is being run by Anwar Sheikh alias “Bichhu Baba” (Scorpion Saint) from a village near Kolkata.

After the raid by the authorities, Sheikh went into hiding before surrendering on August 28. Sambharia stated that Sheikh kept emphasising that it wasn’t a business but more of a hobby, but after three days of inquiry under judicial remand, he confessed. After the remand, he was placed under judicial custody.

The method employed to produce scorpion oil can make one's skin crawl. Over thousands of live scorpions, with a few herbs, are added to a pot of boiling oil. Later, the oil is filtered, packed and sent to different places. According to forest officials, live scorpions are preferred as dead ones reduce the potency of the oil. These gangs have lured the villagers in West Bengal to catch live scorpions for three to four rupees per scorpion.

Sudeep Kaur, deputy conservator of forest (DCF) in Ajmer, told 101Reporters that as per the information provided by Sheikh, it’s clear that numerous gangs from Uttar Pradesh, Madhya Pradesh and West Bengal are engaged in the racket while adding that since this was the first such case from Rajasthan, extra care is being taken into the investigation.

According to sources, the oil produced in West Bengal is sold in foreign countries openly. Even if one wants to procure live scorpion and not the oil, that also can be arranged. The demand for scorpions that weigh more than 30 grams is extremely high in Asian countries. Smugglers usually go to Pakistan, from where it is sent to countries such as China, America and Australia. Officials claim that a lot of big players are a part of this operation.

The state president of People for Animals Babulal Jaju terms the practice of extracting oil from scorpions as inhuman. He stated that no creature on the planet can escape the greed of smugglers.

“Owing to the negligence, lack of effective action and connivance with the concerned authorities, they [smugglers] are able to carry out their operations fearlessly,” he told 101Reporters.