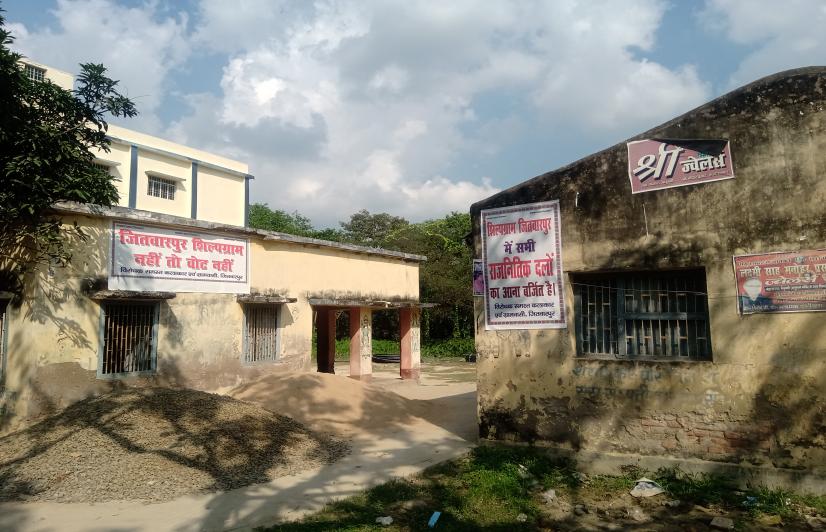 Jitwarpur, Madhubani district, Bihar: Artists from Jitwarpur village of Bihar’s Madhubani district, which is renowned for its Madhubani painting style, have decided to abstain from voting in the assembly elections which began on October 28. Facing the apathy and neglect from the local administration, the artists have also barred the entry of candidates into their localities.

When passing through the village, one can see missing posters of current MLA Faiyaz Ahmad of the Rashtriya Janata Dal and MP Ashok Yadav of the Bharatiya Janata Party, who, according to locals, haven’t visited their constituents since winning the elections. On the abandoned post office and several houses in the village, there are now covered with posters saying, “No Jitwarpur crafts village, no vote” and “All political candidates are banned from entering in Jitwarpur village.”

Speaking to 101Reporters, Shivan Paswan, 64, a national award winner, mentioned that they have voted several times but nothing has changed over the years. While the middlemen and governments have promoted Madhubani painting for their own benefits, artists in the village continue to live in penury, he highlighted.

The schemes to help the artists, if any, exist only on paper and now the youth is moving away from the art form and they are now taking up different jobs to earn a livelihood, he added.

Krishna Kumar, 22, an artist and an engineer by profession, stated that in the absence of help from the government, they have decided to boycott the polls. He said that depending on the art form to sustain his family of 15 was not practical, but he still pursues it as a hobby.

Another artist Asha Devi, 52, informed that a project, which was announced last year, was aimed at connecting Madhubani artists with the buyers or tourists directly. “The project took off smoothly with the effort of the former district magistrate, but all came to a halt after his transfer. No one is paying heed to concerns of the artists here. Women artists who are duped by middlemen need marketing training and a haat near their residence,” she asserted.

Asha Devi with her paintig on wall while talking about condition of Madhubani painters in Jitwarpur. Credit-Aditi Gyanesh

Jitwarpur is home to three women Padma Shri awardees, Jagdamba Devi (1975), Sita Devi (1981) and Baua Devi (2017), apart from many other national and state awardees. Most of the families in the village are into this art form.

The boycott call was made after the CM Nitish Kumar inaugurated the “Mithila Haat” project, on the lines of Delhi Haat, in Jhanjharpur on September 22. However, this was over 30 kilometres away from Jitwarpur. “Most of the artists are either poor or quite old and they can’t afford to travel far away. There is no point opening the haat so far at a place, which does not even have any direct connection with the painting. Jitwarpur has brought so many laurels for the country, but it has always been neglected,” stated Urmila Devi, a renowned artist and resident of Jitwarpur.

Artists say that there are many families that survive on income as low as Rs 500 to Rs 2,000 per week. The lack of basic amenities, such as clean drinking water facilities, proper roads, primary health care facilities and drainage system, has also irked the residents for a long time. Even now, the locals are dependent on hand pumps, which dry up in summers, mentioned Arti Devi, a state award winner artist.

Issues will be addressed: DM

Before COVID-19 hit the country, the village regularly received foreign travellers who bought artworks from them directly. However, with the absence of tourists, the income of artists has been hit substantially.

While Madhubani paintings and specially designed masks have caught the attention of Prime Minister Narendra Modi, the suffering of these artists owing to the lack of proper marketing strategies, heavy influence of middlemen and the cries for infrastructural development remain unheard. Sharing her plight, Asha Devi mentioned that she was duped by a middleman for Rs 30,000.

The government is no longer interested in buying the artworks directly from artists and only those who have influence and are in good terms with officials reach major exhibitions, stated Mithilesh Kumar Jha, who has been engaged in the art form for over 30 years.

Speaking to 101Reporters, Dr Nilesh Ramchandra Deore, District Magistrate, Madhubani, mentioned that he was informed about the boycott call by the artists and instructed the Block to take a note of the artists’ grievances and promised that the important ones would be addressed as soon as the Model Code of Conduct is lifted.

“As far as Jitwarpur Crafts village project is concerned, a proposal has already been submitted to the central government and we are waiting for approval. For the time being, Mithila Haat is being considered a major project, which will help these artists sell their artworks directly,” he added.