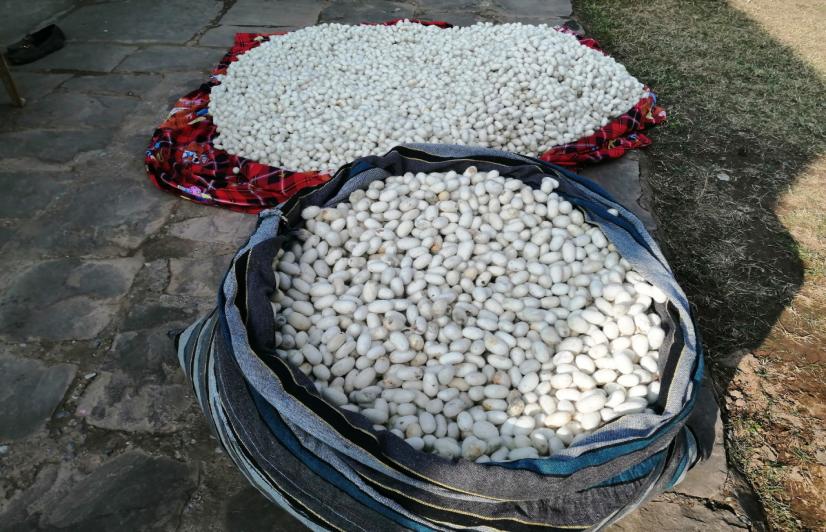 Udhampur, Jammu and Kashmir: The drop in demand for silkworm cocoons owing to the pandemic has impacted the Seri culturists in Udhampur district of Jammu & Kashmir (J&K). Officials say they couldn’t organise auctions as the regular traders from states across the country didn’t approach them.

Practiced by 27,000 families in J&K, a majority of sSeri culturistsin the region belong to economically weaker and socially disadvantaged sections of the society. Officials say that only the auctions for A-grade and B-grade cocoons were carried out. The high-grade silk thread extracted from the fine quality cocoons in J&K is used for making high-quality carpets, ddupioni, chiffon,ccrepe silk suits and sarees, shawls, ties, curtains, among other things.

According to a study, the readers of Udhampur district earn the highest income (Rs 23,940) in the Jammu division followed by Rajouri and Kathua. Even the highest benefit-cost ratio was obtained by the rearers in Udhampur in the Jammu division, it added. Udhampur, Rajouri, Kathua, Anantnag, Bandipore, Baramulla and Kupwara are the major cocoon producing districts while Udhampur is the highest cocoon producing district of the Union Territory.

Sukh Ram Tripathi, sarpanch of Bindla village, stated that though the administration has facilitated auctions in the district, no auctions have been carried out in his block, Ghordi. He asserted that auctions were only held in the Udhampur district headquarters.

He said the delay in carrying out the auctions has added to the woes of the farmer.

“I am very certain that if the administration fails to facilitate auctioning of cocoons of our area this year, the farmers of our block will not rear cocoons next year,” commented Tripathi.

Hukmi Devi, 45, a resident of Lartagan village, took up the cocoon rearing in March after her husband’s health deteriorated. Since it takes the silkworm larvae three to four months to build a cocoon around itself, Hukmi Devi was sure that by June-July, her produce would be ready and it would fetch her good price in the auction in Udhampur Town Hall.

Hukmi Devi's husband scattering cocoon on the cot to help dry the moisture of the produce. Credits: Bivek Mathur

She stated that the girdaur (revenue official) of the area distributed the silkworm seeds in March-April. After that, she purchased mulberry leaves worth Rs 6,000 to feed the worms for three to four months. She added that when her produce was ready, the same revenue official would help facilitate the auction of their yield, but she is yet to sell it.

She mentioned that initially, the officials cited the pandemic and lockdown as an excuse to delay the auctioning, “but now that all other establishments are open and businesses running as per routine, we fail to understand as to why our crops are not being auctioned.”

Rita Devi, 45, a resident of Hartyan village, has been practising sericulture for 25 years. She stated that she produced over 40 kilogrammes of cocoons this year, and expected an income of around Rs 50,000.

However, it’s been over six months since the crop matured, but the administration hasn’t facilitated the auctions, she mentioned. Waiting for the auction, a portion of Rita’s yield has turned dark pale yellow, she added.

Like Rita, Shiv Nath and Tifru Devi of Hartyan and Lartagan, respectively, also stated that they’ve suffered huge losses as half of their crop has been ruined by the moisture in the air.

Kailasho Devi, 38, a resident of Bindla village, stated that she had produced around 80 kilogrammes of wet cocoons in the June-July period. After drying the yield, the weight reduced to around 42 kg, she added.

However, since the crop is yet to be sold, around 12 kilogrammes of it has been destroying owing to the air moisture seeping into the yield.

Earlier this year, media reports said that the silk industry in J&K faced a raw material shortage. Only 300 farmers have sold around 84 metric tonnes of cocoons until September, and about 5,000-6,000 farmers are yet to sell their yield.

Rajiv Gupta, sericulture officer, Udhampur district, asserted that the auction of cocoons in the district would be completed by the end of December.

Speaking to 101Reporters, MA Qadri, sericulture director, J&K government, stated that owing to the spread of COVID-19, traders from West Bengal, Maharashtra, Kashmir and Karnataka didn’t approach them. So, to ensure that the mature crop is not wasted, they approached JK Industries Limited to buy the yield in bulk.

However, the JK Industries Limited bought only A- and B-Grade cocoon, and it caused resentment among the farmers rearing C- and D-grade cocoon, he added.

“If the seeds were distributed by the Sericulture Development Department itself, it was the duty of the department to auction the produce,” she commented.