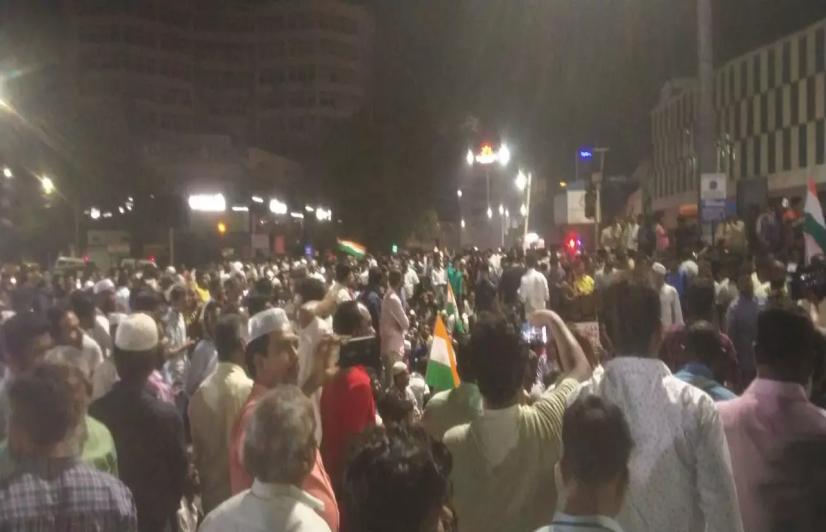 The Tamil Nadu police, which came under an immense criticism for detaining people for protesting against the Citizenship Amendment Act by putting kolam or rangoli in front of their houses, are once again at the receiving end for using the force against the protesters.

The protest against the Citizenship Amendment Act began in Chennai’s Washermanpet started last Friday and was also met with a brutal response from the Tamil Nadu police.

Though there are several protests against the CAA, NRC and NRP being held throughout the country in the last few months, the Washermanpet’s protest was one of the first and major ones from Tamil Nadu, where the ruling AIADMK government has supported the law.

As the AIADMK extended its support to the new law but at the same time, opposition parties including the DMK and the Communist Party started protesting against the act in Tamil Nadu. The Muslim community in Tamil Nadu, which was at the receiving end for not joing the nation-wide protest against the CAA, orgnaised ‘Chennai Shaeenbagh’ on January as the Shaheen Bagh protest in Delhi was gaining momentum. However, the Tamil Nadu police held negotiations with the agitators and dispersed them.

The Muslim women couldn’t hold the urge for long and organised second and much larger version of 'Chennai Shaheenbagh' in North Chennai's Washermanpet last Friday.

At 10 am, about 40 women took part in the peaceful protest and the number of protesters grew as time went by. They sat on the road and raised slogans against the CAA. This time, the police were serious about not allowing the agitations to continue and at about 5 pm Additional Commissioner R Dhinakaran and Joint Commissioner C Mageshwari held talks with the women and asked them to abandon the protest.When the protesters didn’t give into, the cops’ advice, police resorted to lathicharge to disperse the protesters.

Accordingly, the police executed their plan and arrested 40 women. The arrest of women protestors enraged the community members and thousands of people gathered at the site protesting against the arrest.  As the number of protestors increased, police again swung into action at about 7:30 p.m and unleashed the second round of lathicharge and arrests.

Over 200 people were detained in the second round.

As the police resorted to excessive force against the protesters, rumours started that a protester died during the lathicharge. The rumour spread like a wildfire and led to the protests across Tamil Nadu.

As a result, all the arterial roads including Anna Salai, Thiruvallikeni, Alandur were blocked by the protesters. As the situation esclated to Law and Order problem, Chennai Police Commissioner AK Viswanathan held talks with leaders of Muslim organisations at Washermenpet Police station which is the epic centre of the protest. The talks concluded only after the commissioner promised to release the detained protesters immediately.

Explaining the reason behind holding the protest at Washermanpet, Shabana, one of the protesters, blamed the police for trying to delay the protest by not providing them space for over a month. "We began our protest on January 14, the same time when the protest at the (national) capital began. The police did not follow the protests. We were told not to begin protesting until they got a place to protest. But we weren't allotted a place even after a month and failed to fulfill their promise. This is why we began protesting. Though the protest was being done in a way that caused no inconvenience to anyone, police had attacked the protestors. The male police force was sent to attack female protestors. Unless the Tamilnadu Government stands with the people of this state in opposing the CAA , the protests will continue,” Shabana said.

When Newslaundry spoke to Mohan, a journalist who was present at the time the lathicharge, he said, “The cops didn’t want the protests to escalate in the state capital like they did in Delhi. To put an end to these protests, the police applied force.”

However, the police act has boomeranged and after Friday’s incident, Tamil Nadu has started seeing a fresh wave of anti-CAA protests being held across the state.

Major cities and towns of the state like Coimbatore, Tiruchi, Tirunelveli, Salem, Vallore and Madurai also witnessed people, especially Muslims, coming out on the street and protesting against the CAA and the police against the Washermanpet protesters.

Thoothukudi, which saw police atrocities during a protest against the Sterlite Copper plant two years ago, also saw some protests.

Nellai Mubarak, the chief of the SDPI party said, "The protests were being held with no inconvenience to the public. The protests turned violent when then police showed force on female protestors first. Mohamed Rasheed, head of the SDPI wing in North Madras was highly injured as a result. Silent protests are a democratic right, but the ones who are making it violent are the Government of Tamilnadu and the State police, and this has to stop. We request that action must be taken against those policemen who were involved in disrupting peaceful protests.”

Manidhaneya Makkal Kathchi also took part in the protest. MMK's President Jawahirullah condemned the police for attacking the protestors and disrupting the peace. He also urged that the Chief Minister of Tamil Nadu should take action against the policemen who were involved in this act. “There have been nationwide protests against the CAA but the Government of Tamil Nadu has not been permitting protests to be held in the state. The state is acting in support of the BJP government (at the Centre),” Jawahirullah added.

DMK chief, M. K Stalin too condemned this act and stated that the police have done a dirty job by infusing violence in the protests that were being held silently so that they may paint a picture as though the protestors had turned violent.

The Tamil Nadu government has also taken a note of the increasing number and area of the anti-CAA protests and CM Edapaddi Palaniswami held a high-level meeting on Sunday to take a note of the Law and Order situation also to tackle the protests.

In the meeting, held with DGP JK Tripathy, CM was told about how the situation escalated during the protest and the protests spill over to areas out of Chennail.

The DGP has appointed six special officers to look after different cities and rages to keep a watch on anti-CAA protests.

Love in the time protests

The Lala Gunda area in Old Washermanpet which saw police brutality on the day of love -- Valentine’s Day, became the wedding venue for a couple who were beaten up by the cops last Friday.

The couple decided to tie the knot amid the anti-CAA protests and also to say ‘CAA qabool nahi hai’ on the fourth day of the protest on Monday.

“I like this bride. But I don’t like NPR. I accept this woman to be my bride but I don't accept this Act,” said the groom among the cheering guests at the protest site.

Talking about the move, the groom -- Shahensha -- said, ”Our wedding was not fixed suddenly, but decided long back by the elders of both the families. As the protests against CAA are persisting, we are pushed to conduct the marriage amidst the protests.”

“We didn't do this marriage for publicity,” he added.

“Nevertheless, Honourable chief minister of Tamil Nadu, Edapaddi K. Palaniswami, says the implementation of this act would not bring any threat to Muslims. But the promise seems empty as similar to the NIA Act, this CAA tends to focus on the people who act anti-government (against the government). It will be imposed on those who are against the government. This act tries to imprison the people in refugee camps, who raise voice against the government, proving them to be anti-nationalists making them refugees of the country by denying citizenship. This is why we stand against this act. It's futile to think that this act is targeted only against the Islamic community but towards Dalit and other backward communities, pushing them into the refugee camps,” said Shahensha.