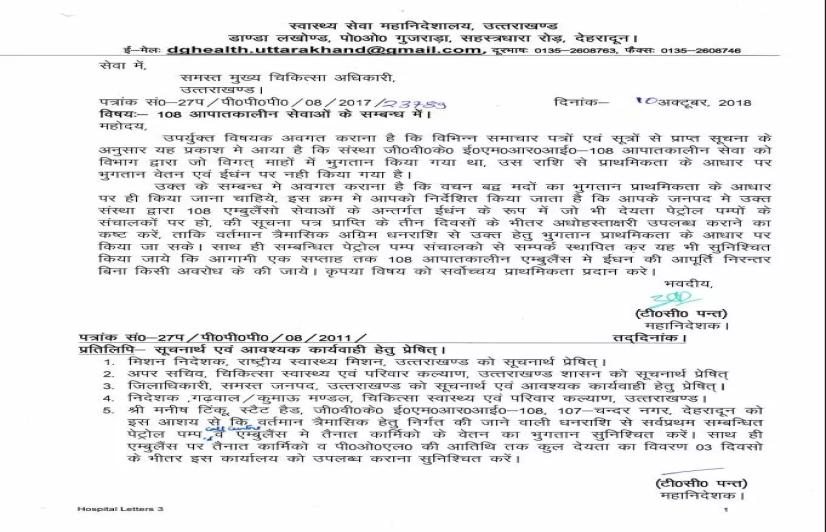 Dehradun, Uttarakhand: With government hospitals across Uttarakhand grappling with scarcity of doctors, ambulances serve as lifeline for sick and infirm in the hills by ferrying them to health centres where medical attention is available. However, the ambulance service itself is ailing due to lack of funds.

Disgruntled employees of GVK, which operates ambulances in Uttarakhand, were not paid salaries for three months. While the past dues were released recently, they are yet to receive salary for October as the company awaits funds from the state government. Ambulances are waiting for repair and maintenance even as petrol pumps have stopped providing fuel on credit. The gravity of the situation can be gauged from the fact that in the second week of October up to 80 ambulances were non-functional. Those who dialed the toll free number 108 were greeted with a ‘no service’ response.

While a newborn lost his life in hilly district of Bageshwar due to unavailability of an ambulance, a woman in labour in remote Pithoragarh was also unable to avail of the emergency service. It was only after such instances that Chief Minister Trivendra Singh Rawat-led government took notice and released funds to ease the situation.

State head of 108 ambulance service Manish Tinku said, “The Uttarakhand government releases funds every quarter in advance for smooth functioning of emergency services. But in the current fiscal year, from April to September, only Rs 68 lakh were released by the government. The state government was insisting that the company should first exhaust the tax deducted at source (TDS) refund amount lying with the income tax department. The TDS had been deducted on amount released by the state. This led to a deadlock, with the state refusing to release funds until GVK used up the TDS refund amount.” At present, TDS refund of Rs 3 crore is pending with the income tax department.

Ambulance services in the state are run under an MoU signed by National Health Mission (NHM), state government and Hyderabad-based GVK in 2008. In the initial decade, the service ran without glitches. At present, the state government releases Rs 24 crore annually for the ambulance service and Rs 6 crore for its ‘Khushiyon ki Sawari vehicles’ which are used to drop mothers and their newborns.

In 2014-15, the state government, struggling with rising financial debt, asked GVK to use balance left after TDS was deducted on amount paid by the government. The TDS refund was, however, a long time coming, causing the emergency services to falter. Additional secretary (health) and MD of National Health Mission Yugal Kishore Pant said that the state has released Rs 3.73 crore which has provided a boost to ambulance services. Pant added, “The government has been releasing funds as per the agreement but GVK needs to get refund on the TDS deducted on time to ensure smooth functioning.”

According to sources government will release funds monthly basis further, instead of quarterly signed in MoU earlier.

Notably, 108 services started in Uttarakhand on May 15, 2008 with 10 vehicles. Today, 139 ambulances are running on state roads. According to WHO guidelines, ambulance vans are to be replaced every three years or after clocking 3 lakh kilometres. However, the state government has not procured a single new ambulance between 2011 and 2017. As a result, most of the ambulances have run for over 5 lakh kilometres on average and many are in dire need of repair. Instances of ambulances breaking down while ferrying patients to hospitals were reported. This prompted the previous Congress government to set in motion the process of buying more ambulances following which the current government purchased 61 new ambulances in April this year.

But in a shocking example of government apathy, the ambulances were kept stationed at the health directorate for over 6 months instead of being included in the fleet. Pant said that the ambulances were bought but had not been fitted with medical equipment. “The vehicles have been sent to Delhi. The state has now got 43 new ambulances and all old ones will be replaced in a phased manner,” Pant said.

According to estimates, 108 facility in the state has helped 13 lakh patients since it was pressed in service. This includes 5,07,000 pregnant women and 1,30,000 road accident victims. Over 10,500 children were born in an ambulance in this period.

Meanwhile, Director General (health) Dr TC Pant has raised questions on 108 administration, claiming that the management was using funds released by the government to conduct workshops, meetings and to fund air travel instead of paying salaries of employees on priority. “I have written to chief medical officers (CMOs) of all districts to ensure that salaries are paid to employees and pending payments of petrol pumps made.”