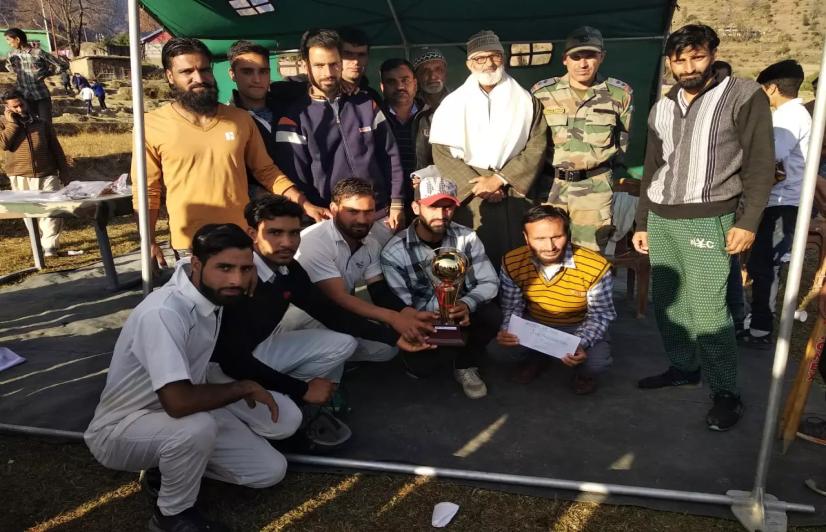 Reasi, Jammu and Kashmir: Rubina Akhtar, was 24 residing in a small hamlet of Mahore in Reasi district of Jammu in 2013 when she started knitting and sewing classes run at Nari Niketan by the Rashtriya Rifles Battalion. She underwent this cadre religiously and took to the nuances of knitting and sewing very soon.

In just over a year, she was instrumental in running the Nari Niketan herself and was imparting knowledge of sewing and knitting to other women folk of Mahore for which she was receiving a small stipend from the Army.

This is the situation in most of the far flung areas of Jammu and Kashmir where terrorism has left a scar on psyche of the residents. Many women like Rubina have benefitted from different programmes launched by Indian army. However the focus of the army has now shifted to the jobless young men who could be an easy bait for ultras.  The army in the state has intensified an outreach programme wherein the armed forces are letting these youths learn the art of making their lives dignified by earning an income through proper means.

Amid reports that Kashmiri youth are getting drawn to terrorism, the Indian army is trying wean them away from weapons through this outreach programme. The army has begun career counselling and vocational courses, imparting training in stitching, vehicle repair among others. The army is reaching out to far-flung schools too, organising picnic for students, apprising them about the army and its activities.

Despite the fact that the army has to face stone pelting quite often from miscreants in valley, the force never shies away from extending a helping hand to the people in valley during the time of need. Be it the flooding in many parts of Kashmir in 2014 or taking on the enemy, Indian army has always remained on the forefront in Jammu and Kashmir.

With the reports with intelligence agencies that Pakistan is again trying to incite feeling of hatred among youths in Kashmir against India, army has intensified its outreach programme. Forces in olive uniform are not only focusing on youth in Kashmir region but also in the areas of Jammu region that had earlier remained hotbed of terrorism including Rajouri, Poonch, Doda and Kishtwar districts.

Army’s Northern Command based in Udhampur has made a complete list of events and activities that take place throughout the year in these far flung areas of the state. From conducting essay writing competition to organising medical camps and taking school students from Kashmir on a tour of the country, the frequency of activities have only grown over the time.

Lt Col Devender Anand PRO (Defence) said that the aim of the competition was to encourage the students and help them in personality development. “The students expressed their views and thoughts about the topic through their writing. Such events, at remote localities encourage the students to understand the importance of enhancing their written expression and communication skills. Winners and runners-up were suitably awarded”.

In a similar event Army conducted “Carrom Board Competition” at Mughal Maidan, Kishtwar where a total of 20 children took part in the event. According to the army such events provide an opportunity for the kids and soldiers to connect and share light-hearted moments in a relaxed, friendly and informal atmosphere.

Terrorism in Kashmir valley erupted in 1989 after sustained propaganda by Pakistan against the Indian government. The early wave of terrorism saw several local Kashmiri youths crossing over to Pakistan and receiving arms training before returning and unleashing terror on this side of the border. Scored of ultras were killed and Indian soldiers martyred during the conflict that ensued for years. Later most of the locals were replaced by foreign (mostly Pakistani) ultras. However during recent years local Kashmir youths have again been persuaded through propaganda by Pakistan to take up guns that has also rung alarm bells among the security apparatus in India.

Understanding that the youths mostly wean away from the mainstream due to lack of job opportunities, army has also started training youths in vocational courses. Army conducted driving courses for youths in different parts of the state to allow them earn a dignified living.

Not only the courses, the Army regularly organizes awareness lectures on special issues. A recent lecture on cold related diseases and their precautionary measures at Government Primary School, Lehran in Ramban district was appreciated by the locals.

Ghulam Ahmad, 42, a local from Ramban who took part in the lecture says that while everyone knows how to protect oneself from harsh winters, the Army provided information about personal hygiene that should be kept in mind during winters.

Col Rajesh Kalia officiating PRO Northern Command, Udhampur says lectures strengthen the bond and generate goodwill between the local populace and the Indian Army. “It is always heartening to see such zeal, enthusiasm and interest among the locals who request for such events” said Kalia.

During the time of emergencies when local administration completely collapses, Indian army is called in. Army was rushed when 10 civilian workers got trapped in an avalanche near Khardung La Pass in Ladakh on January 18 this year. Massive search and rescue operation called ‘Operation Khardung La Rescue 2019’ was launched to save the individuals. Well trained troops from the Siachen Brigade were mobilised along with avalanche rescue dogs. While none of the 10 individuals survived, army retrieved their bodies.

In the sensitive areas of the state having substantial population of Hindus and Muslims, army also organizes communal harmony meetings. Keeping in view festivals of different communities, army often hosts Iftar parties for Muslim communities during the holy month of Ramzan.

Salim Ahmad Chaudhary, a government school teacher and resident of border district of Rajouri says that army has been protecting the people of the area from armed ultras that cross over the Line of Control. “Army has also been an important factor in creating awareness about different cultures and customs across the country. Hosting of Iftar party by army also brings out its secular credentials” said Chaudhary.