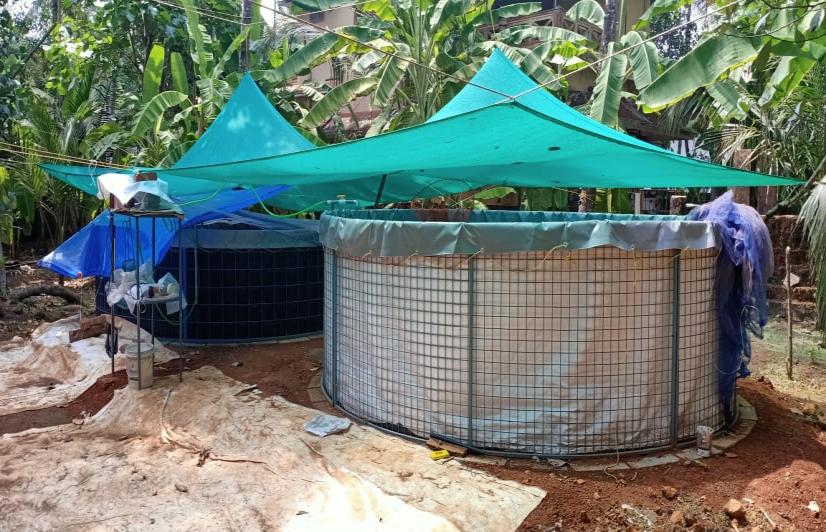 Thrissur, Kerala: Buoyed by the promises of high profits, several young entrepreneurs in Kerala invested in biofloc fish farming. However, their dreams were crushed once they realised they were misled by YouTube videos, which guaranteed high profits.

Biofloc technology is a scientific solution for high-density fish farming in artificial water bodies by utilising the benefits of microbes. This system, in which fish wastage are converted into useful nutrients, helps fish grow with the support of a consortium of good bacteria, diatoms and microlage (floc) in zero water exchange method. To start biofloc farming, one does not require natural water resources such as ponds or creeks or rivers as in the case of traditional fish farming.

However, hundreds of youngsters and entrepreneurs who jumped into the field inspired by videos doing rounds on social media have incurred massive losses. Even as scores of people who started biofloc fish farming end up in trouble, aquaculture entrepreneurs lured by the claims of certain vloggers are still engaged in the trade, especially in Kerala. The COVID-19 pandemic has become instrumental in fast-spreading the wrong practice of this technology. Further, as these budding entrepreneurs are hesitant to disclose their failure, the reality of the sector still remains unknown to all except those involved in this business.

Binish Kumar, a resident of Olavanna from Kozhikode district, stated that about 600 fish were killed in just two months since he started farming. He had started his venture in October 2019 with two four-metre-diameter tanks and had stocked 6,000 seeds.

“If I could earn the money as was projected by social media vloggers, my life would have been settled and stable by now. But I am still trying hard to at least manage to recover from the loss,” he stated.

Dr.KK Vijayan, Director of ICAR-Central Institute of Brackishwater Aquaculture (CIBA), told 101Reporters that even a narrow deviation from the scientific principles in biofloc fish farming can harm the entire venture. He added that one cannot expect a massive profit, as portrayed by the videos on social media, by doing biofloc fish farming on a small scale. 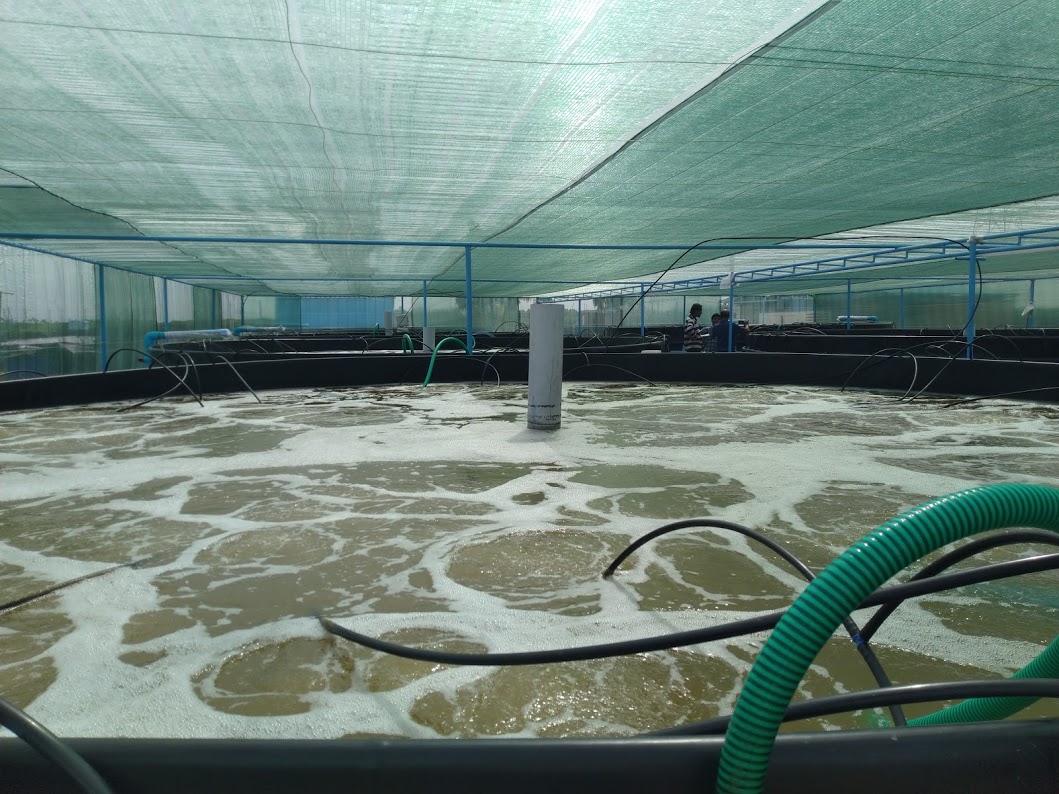 After ending nearly a decade-long construction business in Qatar, Jesso CT, 35,  returned to his hometown Chalakkudy in Kerala’s Thrissur district in March 2019. He came across videos of biofloc fish farming and attracted by the high profits, he invested in it.

He bought two three-metre-diameter tanks, 6,000 seeds of tilapia fish, feed and arranged other ancillary facilities required for the venture. He required around Rs 1.5 lakh for the initial capital for the facility. Meanwhile, Jesso had watched more than 10 videos and joined a few WhatsApp groups to learn the methods of biofloc fish farming before he started his venture in August 2019. After a few months into the farming, he started to realise that his farm was not going to achieve the targeted growth as projected in the video.

“Most of these videos are so tempting and alluring that one can’t stop themselves from stepping into it. Now I feel these trending stuff on biofloc fish farming spreading in social media are largely misleading the laymen, especially budding entrepreneurs who have little experience in fish farming,” stated Jesso.

Raveendran Panjathodi, a resident of Karuvarakund from Malappuram district, stated that consultants are making money at the expense of gullible farmers. He alleged that biofloc fish farming is a way of income for the consultants and retailers, but not for the entrepreneurs.

He believes that consultants are behind these misleading videos and promotions on social media. “In my understanding, this system is not viable to earn big profits by doing it in just one or two tanks. You can pursue this as a hobby like aquarium-keeping or as the means for using fish for your daily household needs,” stated Raveendran, who started last year, but is still unable to meet the expense of his capital investment.

“Biofloc farming is a double-edged sword. As is evident in any field, it is not prudent to go for shortcut methods to get profit easily. Following this technology is not an easy task as wrongly perceived by many. It involves a set of scientific procedures and vigilant steps to follow", warned Dr K K Vijayan 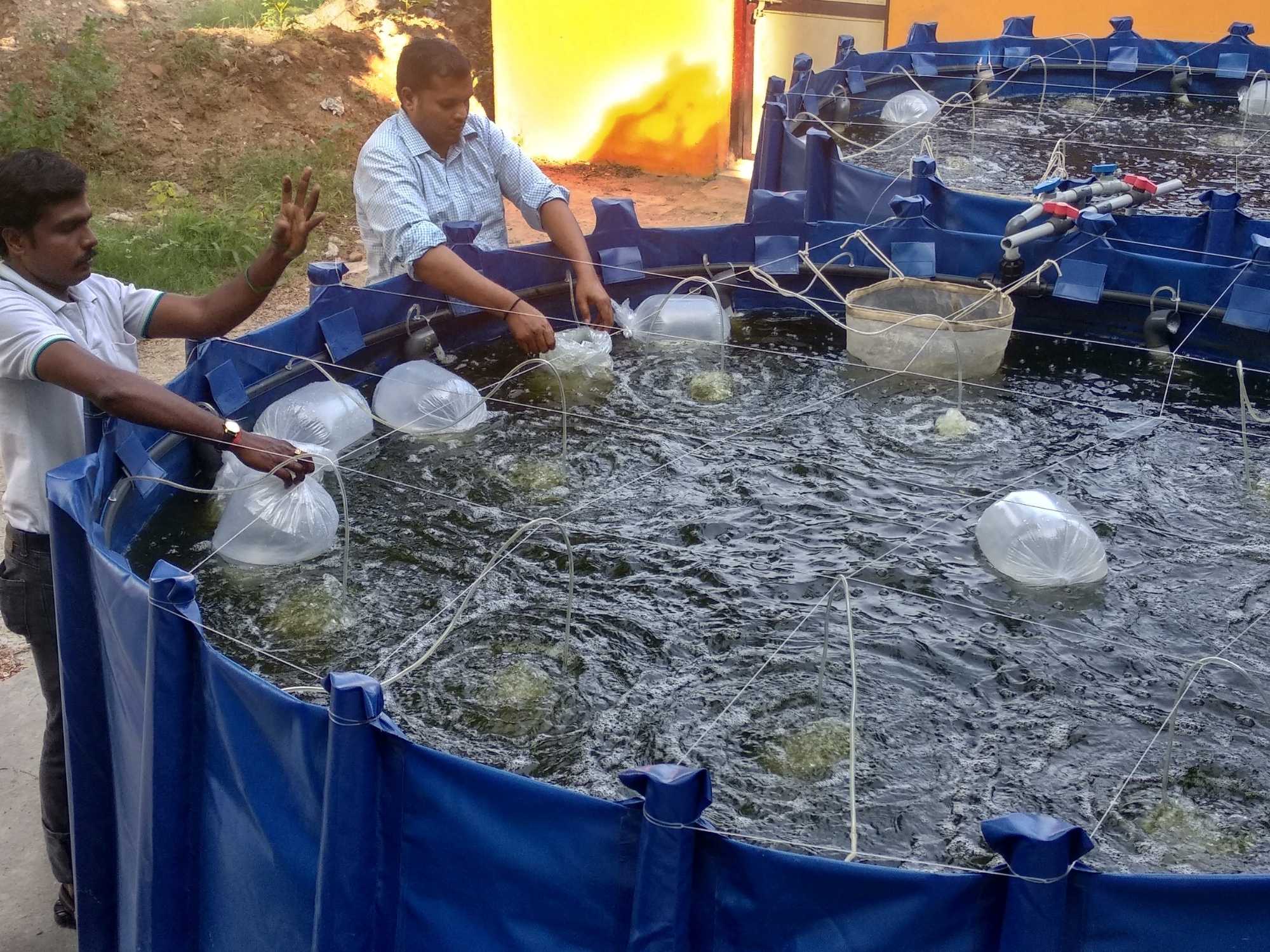 This system requires greater control over the rearing system with a cautious effort to keep a range of components such as adequate carbon to nitrogen ratio, aeration, power back-up, microbes and planktons among many others on a biological balance, stated Dr A Panigrahi, Principal Scientist at ICAR-CIBA.

The recently launched Pradhan Mantri Matsya Sampada Yojana (PMMSY) focuses on promoting biofloc fish farming across the country in a scientific way. Followed by this, state governments started offering attractive schemes to woo youngsters towards high-tech fish farming using technologies such as biofloc and Re-Circulating Aquaculture (RAS). Utilising the fund from the Hyderabad-headquartered National Fisheries Development Board (NFDB), Kerala Fisheries Department is providing a subsidy of around 40% of the total cost of the investment.

Biofloc fish farming has been included in the ‘Subhikhsa Keralam’, an ambitious project implemented by the state government in the wake of COVID-19 to scale up agricultural production to meet increasing food demand. Kerala Fisheries Department officials are hopeful of increasing the domestic fish production from the state by means of high-tech farming practices like biofloc. They are also in favour of the demand that this technology should be adopted completely with scientific protocols. According to a government official, Kerala will have at least 6,000 biofloc units under the government’s scheme alone by December 31 this year.

Patience, regular and continuous observation apart from hard work are required to succeed in this farming practice, stated Dr Mithun Sukumaran, Assistant Professor at the Department of Aquatic Biology and Fisheries at the University of Kerala. Aware of the booming wrong-practice buoyed by unrealistic claims by some private consultants, Dr Mithun suggested following scientific-oriented training and technical support from experts in the area.

“We keep advising people to follow scientific procedures and help them receive technical expertise from the scientific community," stated B Ignatious Mandro, joint director of the state fisheries department.

Referring to the wrong practice of the system, he mentioned that the fisheries department is aware of such videos on social media and the government has already started developing strategies to tackle this issue by organising training programmes. Fisheries Minister J Mercykutty Amma herself posted an awareness message on this even few months back, he added.