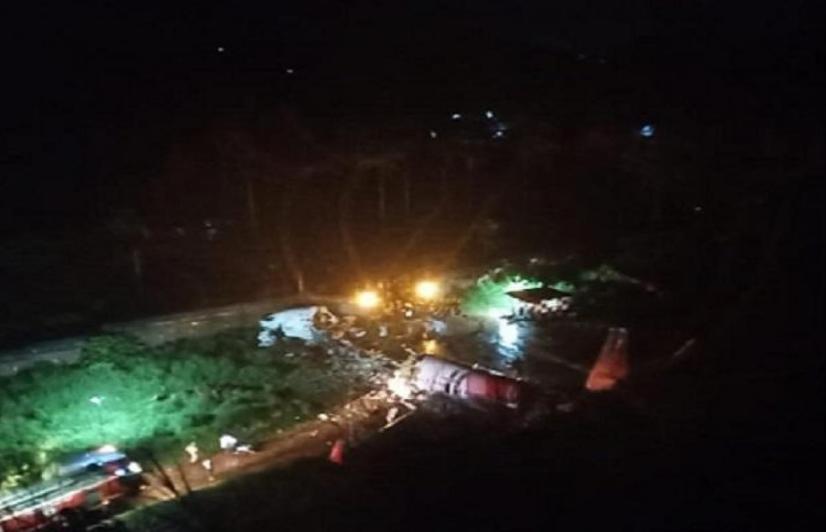 Kozhikode, Kerala: An Air India Express flight from Dubai to Kozhikode crashed on Friday evening after the aircraft skidded off the tabletop runway at the Calicut International Airport.

Air India Express confirmed the accident and issued a statement confirming, “174 passengers, including 10 infants and six crew members (including two pilots) were onboard the Dubai-Kozhikode Air India flight (IX-1344).”

Confirmed news from sources reveal that the Captain of the flight Cmdr Deepak Vasant Sathe and First Officer Akhilesh Kumar and 15 passengers died in the accident.

“The incident took place at 7.45pm,” confirmed The Directorate General of Civil Aviation (DGCA) in a statement. The Directorate General of Civil Aviation has ordered an enquiry into the incident. According to reports and pictures from the accident site, the aircraft split into two after it overshot the runway. However, there was no confirmation of the aircraft catching fire.

Other crew members on board included Shilpa Katare, Akshay Pal Singh, Lalit Kumar and Abhik Biswas – all of them Indian nationals.

Kerala minister A.C Moideen has been leading the rescue efforts at the Calicut International Airport.

Rescue operations are underway and further reports are awaited.

Former Minister of State for Tourism KJ Alphons who hails from Kerala has also confirmed the accident in a tweet.

Meanwhile, according to the Kerala Chief Minister’s office, Mr Vijayan spoke to Prime Minister Narendra Modi over phone and apprised the PM of the arrangements made for rescue and medical support. “The Prime Minister has promised the assistance of the Union Government,” added the CMO’s statement.

The Calicut International Airport, also known as Karipur Airport, is an international airport serving the cities of Kozhikkode and Malappuram in Kerala. The airport has a runway that is 2,700 m long but is the shortest of the four airports in Kerala.

While the airport has been operational since 1988, it got the tag of an international airport in 2006. One of the busiest airports in India, the Calicut Airport is a hub of Air India Express that operates many Haj and other international flights from here. A key landing point for those travelling to North Kerala from UAE and other Gulf countries, Calicut Airport lost its sheen when the Kannur International Airport was readied in 2018.

Calicut Airport is one of only three tabletop runways in the country, built on a hilly terrain and can be challenging to pilots.

The Calicut airport has a tabletop runway named Runway 10 that is located on the top of a plateau or hill with one or both ends adjacent to a steep gorge. Such a runway mandates very precise landing and approach by the pilot.

According to former head of operations of Alliance Air and IndiGo Capt Shakti Lumba, pilots face difficulties during the landing or taking off from table-top runways. “There are two issues: runway environment and approach environment. For the first case, is the length of runway long enough for normal operations and is there enough overrun area in case of a misjudged landing/aborted take-off, as stipulated by the International Civil Aviation Organization (ICAO). If these two are met, then for take-off, tabletop runways pose no risk. However, for approach, pilots can be subjected to misleading illusions while landing with perceived height above ground, leading to misjudging the approach profile during visual landings,” Capt Lumba had told News Karnataka.

Meanwhile, the Chief Minister of Kerala has tweeted the helpline numbers to assist the passengers who were onboard the Air Indian Express AXB1344.

The helpline numbers are following:

Air India Express has also established a helpline number in Sharjah at 00971 6 5970303. People can call them as well for updates.