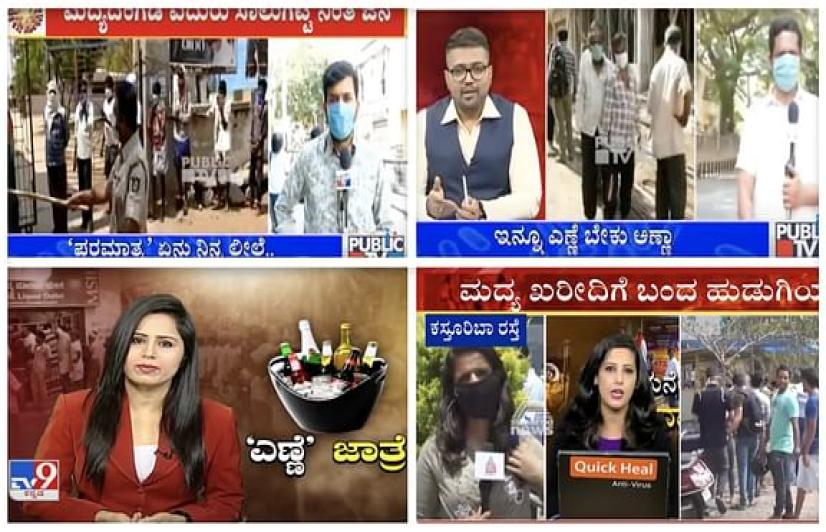 On May 4, liquor shops in the country were reopened amid lockdown imposed on March 25. As people stuck in quarantine over 40 days came out to buy liquor, long queues were seen in front of almost every liquor shop. However, several people, including Bollywood director Ram Gopal Varma, and media organisations in Karnataka ridiculed women for lining up to buy their booze.

On Monday, Varma tweeted a photo of women lining up for alcohol in queues and wrote, "Look who’s in line at the wine shops...So much for protecting women against drunk men." To his tweet, singer Sona Mohapatra replied saying, "Dear Mr RGV, time for u to get into the line of people who desperately need a real education.1 that lets u understand why this tweet of yours reeks of sexism & misplaced morality. Women have a right to buy & consume alcohol just like men. No one has the right to be drunk & violent."

Prajwal Bhat, who clicked the picture shared by Varma and a reporter with The News Minute, tweeted, “1. You tweet a pic I clicked and 2. Your tweet is twisted and sexist. If you were there, you would see that there were hardly a dozen women standing while there were hundreds of men in a serpentine queue. The police officers on duty said a separate line was made to protect women.”

Talking to Newslaundry, Bhat stated that Varma had cropped the picture he had clicked and changed the narrative as the picture is from a wine store in Kaggadaspura in Bengaluru. The on-duty cop had made separate lines for men and women because there were hundreds of men and only a few women who had turned up, he added.

“His (Varma’s) tweet was elitist and sexist and somehow suggested that women should not be drinking. Where does it say that women cannot drink? There could be a hundred women in that line and I don't see an issue with it,” Bhat commented.

Alcohol served with judgment for women

While people online were giving their opinion on why women should or shouldn’t be buying alcohol, Kannada TV news channels slut-shamed women for standing in the queues to buy alcohol. These channels surrounded women and asked uncomfortable questions because they were buying alcohol. They constantly flashed the photos and videos of women standing in the queue outside liquor shops in Bengaluru while passing moral judgments on them.

In a bulletin named ‘Coronavirus: Women Wait In Long Queues To Buy Liquor At Bars In Bengaluru’ by TV9 Kannada, a regional TV news channel, the entire video focused on how women are standing in the queue to buy alcohol and they exclusively talked about women in different areas of the city such as RT Nagar and Electronic City.

In the broadcast, the anchor Sukanya Sampath mentioned that there are a few women who are students while others are employed/salaried. She shamed the women by saying that earlier consumption of alcohol was done in secret, while today women have all come out to buy alcohol openly and it feels like their main aim now is to buy alcohol.

'It would be really wrong if we say only men are waiting to buy alcohol, as we can see from the visuals even women (and young girls) are also standing in the queue,” the anchor said.

In another TV9Kannada bulletin named ‘Bengaluru: Woman Poses Victory After Buying Liquor, Who Waited In Long Queue From Early Morning’, Sampath talked about the alcohol shop named Madhuloka in Rajajinagar, Bengaluru. The anchor emphasised how women waited from 6 AM in the morning to purchase alcohol.

They further showed visuals of a woman holding a rum bottle along with a victory sign. While the TV9 Kannada cameraman and crew shot women posing with liquor bottles. While it’s clear that the women were asked to pose, the anchor commented on the visual saying, “Alcohol consumption is injuries to health, but if you have bought the bottle there is no need for you to show that bottle on camera.”

Kabeer, who goes by his first name, Chief Editor of TV9 Kannada, told Newslaundry that they have broadcasted what they have seen on the ground.

“We have not deliberately shown it, we have telecasted what we have seen in the city. We are not objectifying any women and we have no problem in any women purchasing alcohol and all, it is common,” Kabeer said.

Another regional channel TV5 Kannada repeated the same story as TV9 Kannada. In one of its bulletins named ‘Girls Standing In Queue For Buy Liquor in Bangalore’, various visuals of women standing in the queue to buy alcohol in the city was shown. Further, the anchor mentioned an alcohol shop in Bengaluru and said that a woman had fallen unconscious while standing in the queue to buy alcohol because of the heat and that she had skipped her breakfast. The anchor made this claim but the women neither said anything on camera nor gave an interview.

The visuals of that woman sitting on the chair and resting, and later leaving the shop after buying alcohol were on a repeat mode and the anchor was pretending as the girl made a big mistake. The girl was not wearing a mask so repeatedly she was trying to cover her face with her hands to avoid getting recorded but the cameraperson still followed her everywhere till the point they got her complete visual. Without her permission, her footages were played at least 10 times in a six-minute bulletin.

In one of its bulletins, anchor Pratima Bhat at Suvarna TV, a channel owned by BJP's Rajya Sabha member Rajeev Chandrasekhar, started the bulletin by saying that the young women have been standing in the line since morning in Manipal and Bengaluru city. The anchor also said that there are more foreigners in Manipal city and they have also come to buy alcohol and the anchor constantly shamed the women for coming out to buy alcohol.

Further, the anchor asked the reporter, “Are there more women out there to buy alcohol in the Kasturba Road?”, to which the reporter Vidyashee Gowda agreed and showed visuals of women and also foreigners who had come to buy alcohol.

Rekha Sharma, Chairperson of the National Commission of Women (NCW), told Newslaundry that these media organisations are not sensitive enough towards gender equality and when they are saying liquor is bad for women, it is equally bad for men and if men can enjoy liquor, women can also enjoy.

She further ensured that the NCW will look into the issue and the will take the proper action against such media channels.

Rakshith S Ponnathpur, a public policy student at National Law School of India in Bengaluru, told Newslaundry that instead of calling out the moral police and upholding the liberty and choice of women, it is extremely unfortunate and shameful that the media itself is taking a proactive role in moral policing and slut-shaming women. This is an absolute disgrace to their profession and the responsibility they hold, he added.

Gayatri Sa, a Bengaluru-based freelance writer, said that liquor is universally accepted, so it should be common for any gender to have the right to consume it, while women are viewed differently whenever they go to buy liquor.

They are seen as outcasts or as if they do not have the right to drink, she further said.

“We, women, can drink and smoke based out of our interests. It doesn’t have to do anything with gender. We shouldn’t be catcalled, teased or stared at. Just accept us just as it’s so normal for a man to come and buy, as simple as that. I am not talking about our privileges or the patriarchy, it’s just very humanly to accept the fact that we can do whatever men can do,” Gayatri added.

In Karnataka under Rule 21 of Karnataka Excise (Possession Transport etc) Rules 1967, individuals which are above the age of 21 are allowed to consume and possess the liquor. Under the rule the quantity any individual can possess is IMFL – 4.6 litres, Beer – 18.2 litres, Wine – 9.0 litres, Toddy – 2.5 litres and FMFL – 9.1 litres and nowhere it is written that women are barred from consuming or possessing alcohol.  While Indecent Representation of Women (Prohibition) Act 1986 states that the depiction in any manner of the figure of a woman; her form or body or any part in such way as to have the effect of being indecent, or derogatory to, or denigrating women, or is likely to deprave, corrupt or injure the public morality or morals", is a punishable offence.

The Cable Television Network (Regulation) Act, 1995 also makes it mandatory that women must not be portrayed in a manner that emphasises passive, submissive qualities and encourages them to play a subordinate, secondary role in the family and society. News Broadcasting Standards Regulations states that the television can not reveal the identity, images or videos of a woman without taking proper permission from them and the privacy of women must be respected, their names, images and other details will not be disclosed.

Maitreyi Krishnan, an advocate in the Karnataka High Court, stated that this is the complete violation of the privacy of all individuals standing there and specifically pointing out women standing in the queue is absolutely retrograde. Saying such things to women is absolutely unethical and it can not even be called journalism at a time when migrant labourers are facing extreme difficulties like not having food and unable to go back home, instead of showing such relevant issues, they are showing such patriarchial mindset which is extremely disturbing, she added.

The media really needs to think about their role at this point in time and the monitoring committee should definitely take it forward as the way they have been targeting women is shameful and immoral and it is a violation of decent representation of women act and violation of fundamental rights to privacy as well, she added.

“Singling out people on the basis of gender is extremely problematic and action needs to be taken against such organisations. Moreover, this is happening when an Instagram group is making a noise all over India. These channels are responsible for such groups because these channels add fuel in fire by objectifying women and this kind of patriarchal thinking is imposed on minors. We need to think where we are going as a society as this stereotyping will make women more vulnerable,” Maitreyi said.

Cynthia Stephen, an independent researcher and Bengaluru-based journalist, said that women have a right to do what they want and if they feel to purchase any product, they should be allowed to do that, there is no need to stigmatise them for buying anything. If they want to sensationalise the shaming of women, that is highly condemnable and this also shows the behaviour of Indian society which tends to be conservative and tries to always bully women’s public behaviour and media is playing along with it as they are carrying out a very patriarchal and sexist agenda, she added.

She further added, “I hope media have better things to do then finding such non-stories to waste the time.”