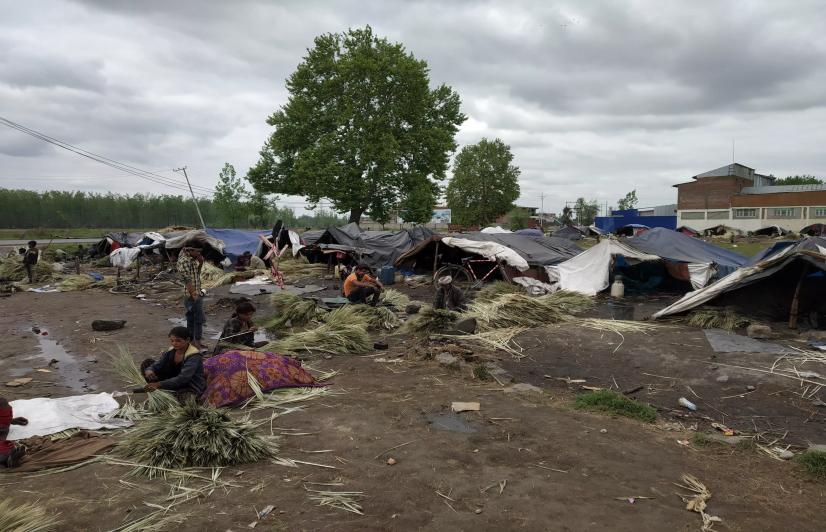 Jammu and Kashmir: There are those who dutifully cast their vote and feel smug about being a good citizen. Then there are those who can't be bothered. Not delinquent but disenfranchised, because of poverty. Rajasthan's broom makers who have moved to Kashmir for their bread and butter are one such people.

“It’s poverty that compels us to leave our native place and travel hundreds of kilometres every year. Brooms have almost no demand outside Kashmir and we don’t have any other work to do,” said Lahri Bai, 57.

She is from Chittorgarh but has been living along the National Highway in Anantnag district of South Kashmir in a tent made of tattered tarpaulin. She is one of the thousands of migrant workers hailing from the western state. They belong to the Bagariya tribe, which is listed as a Scheduled Caste in their home state. They are fluent only in their local language.

Lahri has come with her son and daughter. Every year in March, hundreds of families like hers take a trip of ~800 km from Rajasthan to Kashmir. They set up tents across the valley in Handwara, Sopore, Srinagar, Pampore and Anantnag, making brooms out of date palm leaves that they bring with them in bulk.

When Rajasthan went to polls on April 29 and May 6, these broom makers were blissfully unaware of the so-called festival of democracy, occupied with their work as usual. 101Reporters met them a couple of days after the second round of voting in their home state. When asked if they were aware of the elections, Sonu Bagariya, 28, thought hard and responded with a despondent "Nahi, bhai." (No, brother.)

He lamented that his people haven't received any help from the government, forcing them to travel hundreds of kilometres and live in tough conditions to make a living."When they don't care for us, why should we bother about their election," he proclaimed.

Anger writ large on his face, he said no government officer, be it in Rajasthan or Kashmir, approached them regarding the election. He elucidated that making and selling brooms is what their life revolves around every single day. "Elections mean nothing to us."

This correspondent asked them if they knew who the Prime Minister of India or the Chief Minister of their state is. Looking lost, Sonu asked his fellow worker, "Do you know?" Nobody knew.

Explaining their ignorance, Ladu Bagariya, 60, said they had cast votes in previous elections. He said politicians had approached them and sold them hopes, which never materialised. "We are still living the same life. Our only concern always remains how to earn a few hundred rupees and buy food for our kids,” the old man explained.

Lahri said her family earns about ₹200 a day. Every family works outside their tent, with the experienced hands efficiently and painstakingly cutting palm leaves and making brooms out of them. The young ones take the brooms on bicycles to villages, towns and shopkeepers. For every broom sold, they earn a profit of ₹5-10.

One look at the children of these families makes their poverty evident, what with their sunbaked skin and half-naked body. As the elders meticulously go about making brooms, they hang around, getting a hang of the work they'll need to get adept at to make ends meet as they grow up. For them, education is a far-fetched idea.

Lahri's children have never been to school. Sonu too has never been to one. He said he had got his younger sister admitted to a government school in Rajasthan but she couldn't stick around. Twelve now, she is with the family in Kashmir and helps make brooms. Sonu said education, jobs, concrete houses etc are a pipe dream for people like them.

Since 2007, the Bagariyas have been coming to Kashmir every year to make and sell brooms. They work in the valley from March to November, Ladu said. Even when it snows, he adds. They can't afford to miss even a day's income. In winters, they go about their work with tattered blankets to protect them from the biting cold. The work goes on unabated in the scorching heat of the summer too.

Living on a hand-to-mouth basis, they are not on the radar of political parties or government authorities. They have come to understand they are on their own. That's why they have only cuts and callouses from broom-making on their hands, no inked finger for them.

Deceived by netas, ignored by government, Rajasthani migrants in Kashmir have nobody to count on. Except the Kashmiri brethren, whom they can't praise enough for extending warmth and support.

With no jobs back home and no market elsewhere for the brooms they make from palm leaves, thousands of Rajasthanis migrate to Kashmir valley every March. They stay put here till November, living in tarpauline tents, performing the exacting task with their bare hands. Their job is tough, so are the living conditions and the income too is ho-hum, but the social milieu of the valley is something they can't stop gushing about.

“We have been coming to Kashmir for 12 years. Back home in Rajasthan, when anyone asks me what I like most in Kashmir, I reply, ‘Its people’,” says Ladu Bagariya. “We set up tents every year on this ground without giving any rent. Instead, the owner of this land cares for us. He sometimes visits us and tells us to live happily.”

Ladu, 60, had first come to Kashmir in 2007 as the demand for the broom they make began dwindling in other states. As thousands of brooms were sold in the valley within months, Ladu's folks began coming here every year.

They are from the Bagariya tribe, listed as a Scheduled Caste in Rajasthan. They live in abject poverty, as evident by their settlements. Back home, they say they own no property and live in mud houses and in Kashmir, where they live for nine months a year, they live in tarpauline tents.

For all the bad press Kashmir gets about being a conflict zone and anti-India undercurrents, the Bagariyas haven't faced slightest trouble from the locals.

Ladu comes here with his entire family every year. His sons, daughters, daughter-in-laws, grandchildren, all live here, assisting in making and selling brooms. He's not the only one going gaga about the warmth and hospitality of Kashmiris. Sonu Bagariya, 28, can't agree more with him.

“When I load my bicycle with 250-300 brooms and go to sell them in villages and towns, people sometimes offer me food. When my cycle gets stuck sometimes because of heavy load, passers-by come and push it. I have never seen such type of people,” chimes Sonu. “Who cares for poor people like us nowadays!”

When tension prevails and Kashmir remains under lockdown, the broom-makers say they continue their work without any interruption.

“When the valley remains under lockdown, we take alternative routes to reach villages and sell our brooms. Nobody ever treats us like outsiders. We didn’t face any problem even in 2016, when Kashmir was going through a terrible period,” says Sonu.

“Protesters don’t pelt stones on us,” he shares with a smile. “Their fight is with the forces. They always give us safe passage.”