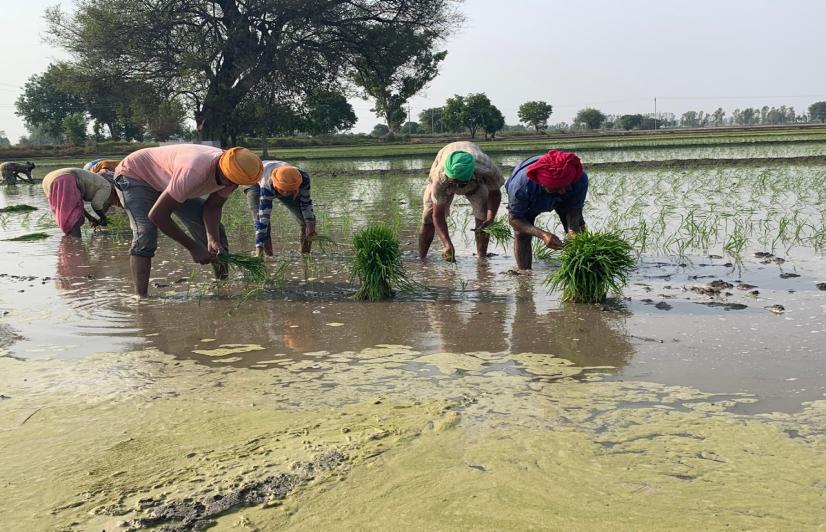 “The panchayat has fixed the rate of paddy sowing at Rs 3,200 (per acre) and that of basmati at Rs 3,500. If someone pays more, he will have to bear a fine of Rs 50,000 as decided by the panchayat,” this is a dictate announced on loudspeakers of a gurdwara in Punjab. A video in which a panchayat member of a Punjab village is announcing this dictate passed by the village administration has gone viral. “Apart from this, the daily wage rate has been fixed at Rs 300 while the half-day labour charges will be Rs 200. No meal will be served to the labourers,” the man in the video further announces, adding that if any untoward incident happens to the labourer, the employer won’t be held responsible.

As Punjab enters the paddy plantation mode, sermons by panchayats in different parts of the state echoed from the loudspeakers of gurudwaras warning the upper-caste ‘Jat’ Sikhs, who are the landowners, to not pay more to the Dalits who are mostly landless agricultural labourers.

Although nowhere does the word ‘Dalit’ been mentioned in the resolution, the panchayat in Ghanauri Khurd village has made it clear by asking the domestic labourers (which constitutes mostly Dalit Sikhs) to bring their own food and utensils, surprising many, as food was served by the landowners to migrant workers previously. In the announcement by the local panchayat, it was mentioned that the small number of migrant labourers would be provided five kilogrammes of rice for cooking after they plant paddy in one acre of land, while no food would be served to the domestic labourers, most of whom belong to the Dalit Sikh community.

Balwant (name changed), a Dalit Sikh resident, stated that the local labourers have been promised Rs 300 per day. Though he feels that the Rs 300 daily wage is fair, he lamented the way they are being discriminated against by the panchayat.

The conflict between Dalit labourers and upper-caste landowners started after the majority of migrant workers fled Punjab after coronavirus pandemic gripped the nation. Migrant workers are in great demand in the state at this time every year when rice plantation takes place and the number of labourers from Bihar swells. Migrant workers are not only provided accommodation but also food and even liquor besides labour charges that range anywhere between Rs 2,700-3,500 per acre or more, depending upon the area.

However, this year many panchayats, mostly in Malwa region or southern Punjab, have announced the rates with a warning that anyone including the landowners or labourers going against the announcement would be penalised and even boycotted by the entire village. Even though the demand is high, the wages of Dalit labourers are not indicative of the market forces.

In some parts of the state including Bathinda, Amritsar and Ludhiana the domestic labour was given Rs 4,000-4,500 per acre for paddy plantation that triggered panic among the farming community and resulted in these sermons.

Paddy is cultivated on nearly 26 lakh hectare of land in Punjab. Dalits constitute 32% of the total population. The majority of this segment of society is agricultural labourers or is engaged in low wage and arduous occupation. Dalit Sikhs comprise 60% of the total SC population in the state.

Lakhveer Singh, state secretary of Krantikari Pendu Mazdoor Union, an organization fighting for justice for Dalit labourers, stated that while the farmers and local labourers want to live peacefully, the panchayats are creating a rift between the two.

He added that by asking Dalit labourers to bring their own utensils for food or not allowing them to go to other villages for work, the landowners are violating the human rights of the poor labourers who were without any work owing to the coronavirus pandemic for past three months.

He mentioned that the warning by panchayats against violation of their resolution is basically the “deep-rooted hatred against Dalits that has now come out openly.”

On June 11, a delegation of Krantikari Pendu Mazdoor Union met Gobind Singh Longowal who is the chief of Shiromani Gurudwara Prabandhak Committee (SGPC), a Sikh body that manages gurudwaras in many states and told him about the issue.

The panchayats, especially in Sangrur and Barnala districts of the state, were not only discriminating against the Dalit labour but also imposing restriction on their movement before the paddy plantation is completed in their own villages. According to the dictates issued by the Sangrur (the copy is available with Article 14), the labourers cannot move to other villages until the paddy sowing in their own village is over.

Ram Saroop Sharma, Sarpanch of Gurusar village in Bathinda district, where a similar resolution has been passed, stated that the state is facing labourer shortage due to which the labour charges have skyrocketed. To counter this issue, farmers are approaching panchayats after which a resolution is being passed so that we can keep a check on the high labour charges, he added.

Many farmers are already buried under the burden of loans and it has become difficult for them to pay high labour charge, he mentioned. On the other hand, owing to the shortage of migrant labourers, the local workers have been told to first complete the work of paddy sowing in their native villages before moving to other areas, he added.

However, Narbhinder Singh, the District Development and Panchayat Officer, stated that no such case has far come into their notice. He highlighted that if any panchayat has passed resolutions fixing labourer charges or discriminating with the domestic labourers, it is unconstitutional and appropriate action would be taken in the matter.

A similar situation can be witnessed in Kharyal village of Sangrur district, where restrictions have been imposed on local labour. Cases of discrimination against the domestic agricultural labourers have also come from Moga and Mansa district in Punjab but the state government has so far not taken any action against the panchayat members passing such resolutions.

Dalit rights activist Mukesh Malaud, the president of Zameen Prapti Sangharsh Committee, stated that Dalit labourers have told him from Patiala, Moga, Bathinda, Sangrur and Barnala that they are being discriminated against by the panchayats. “There are many villages where oral resolution have been passed and announced from gurdwaras. These kinds of resolutions by panchayats have not even come in the notice of anyone. Different villages are fixing different labourer charges for the domestic labourers, but the consent of these Dalit workers hasn’t been sought,” he mentioned.

Dalit labourers have also held meetings in some villages raising serious objections against the resolution by Panchayats. Women and men both took part in a meeting in Mehlan village of Sangrur and discussed the further course of action. Satwinder Kaur, a Dalit labourer, stated that discrimination by the panchayat of the village was discussed and it was decided that the issue would be raised so that everyone would come to know of the developments in Punjab. "How can a panchayat fix labour charges? While they happily pay a handsome amount along with food to the labourers from other states, what is the problem in offering us the same," questioned Kaur. A similar meeting was also held in Khadial village of the district.

Experts believe that a conflict between ‘Jat’ Sikhs and Dalits is emerging on a larger platform this time owing to the coronavirus pandemic. They say that conflicts between upper castes and Dalits used to be there before the green revolution in Punjab when daily wages used to increase.

Prof. Gian Singh, a former professor at the Economics department of Punjabi University, stated that the labourer charges in Punjab are determined by demand and supply of labour but this is an exceptional year that there is no migrant labour and those who were supposed to come for paddy plantation did not turn up due to which supply reduced considerably.

“The standard charges for plantation of paddy on one acre of land was somewhere near Rs 3,000 per acre that has now increased to Rs 5,000-7,000. It is important to understand that the local labourers were sitting idle for the past three months and didn’t earn anything and it was their right to get this amount. However, on the other hand, the financial condition of small farmers is also not strong that they can pay increased labour charges,” he added.

He explained that the majority of domestic labour belongs to the scheduled caste community and the issue of labourer charges has converted from farmer versus rural labour problem into upper caste versus Dalits tussle.