Exclusive: ‘BJP Made a Fool of Us’: Deprived of ST Status, Assam’s Adivasi Community to Intensify Protests 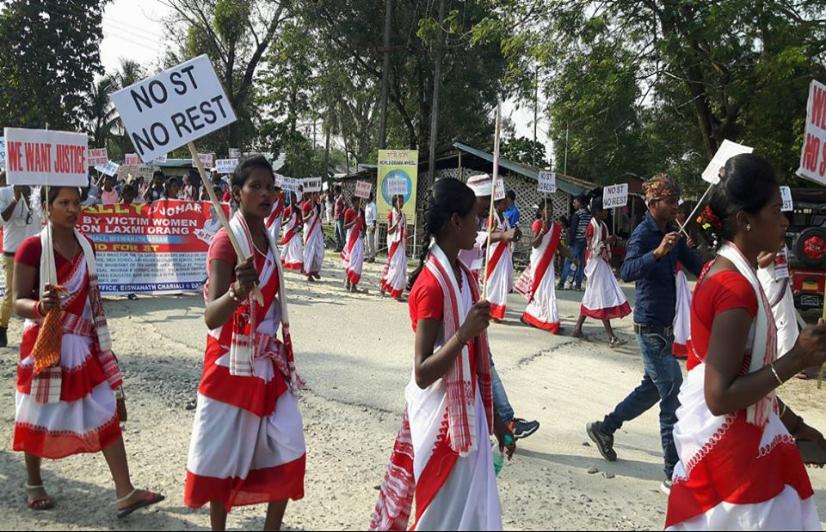 Biswanath: Laxmi Orang was just 16 when she was assaulted, stripped and paraded naked in Guwahati for fighting to get Assam’s Adivasi community the Scheduled Tribe status.

Eleven years and numerous protests later, neither has she received justice, nor has her community of over 60 lakh tea garden workers been recognized as Scheduled Tribe.

On November 22, two days before the completion of 11 years of the ‘shocking’ incident, she once again took to the streets leading hundreds of Adivasis for their cause. In a memorandum to Prime Minister Narendra Modi, who’s BJP government rules in Assam, she asks, “Prime Minister Modi says ‘Beti bachao, beti padhao’. Aren’t the Adivasi women beti (daughter) of the state?”

Laxmi’s brother and assistant secretary of the All Adivasi Students’ Association of Assam (AASAA), Rajen Orang says, “Laxmi is a living example of oppression, injustice and the sorrow state of the Adivasi people of the state. The cry for justice had remained unheard during the 15 years of Congress rule. The former government played politics over politics and when BJP came up with fresh promises of granting ST status within six months time if voted to power, the community people easily fell for it. But even the BJP has made a fool out of us.”

Assam’s Adivasi community is the tea industry’s backbone. While demands for recognition started after independence, agitation gained full force from the 1980s when the community demanded that they, along with five other indigenous communities like Koch-Rajbongshi, Tai-Ahom, Chutiya, Moran and Muttock, be recognized as a Scheduled Tribe.

While Adivasi communities across Indian states fall under the ST bracket, they are deprived of this in Assam. As per the law, the list of Scheduled Tribes are accorded for each state or Union Territory and are valid only within that particular jurisdiction. The list of Scheduled Tribes is usually state-specific and a community declared as ST in one state, does not necessarily receive the same recognition in other states.

During the early 19th Century, the British relocated Assam’s Adivasi community from central India’s Chotanagpur plateau for tea cultivation. They now constitute 18 to 20 percent of the state’s population, as per Census 2011. They reside across several districts of western, central and upper Assam. “It’s a shame that Assam is known for its tea, but the people who are behind this world famous industry have been crying for their basic rights and both, Centre and state governments have turned a blind eye to it. The government is only using us as a vote bank,” Laxmi says.

It’s been a ‘tried-and-tested poll issue’; promises have been made by every government before elections, yet the communities still struggle for recognition.

AASAA’s general secretary, Joseph Minz said, “The government is deli-delaying the process for their vested political interests. It only shows their seriousness. We are going to hold a discussion with all the other Adivasi groups in the second week of December to fix our agendas to refresh our agitations on a large scale. It’s been a long wait and we need definite answers.”

The Centre’s delay in granting ST status to the six communities has been termed as a mere political tactic by the All Assam Students’ Union (AASU). AASU chief advisor, Samujjal Bhattacharya says that the BJP-led government has failed to fulfill promises made before the 2014 Lok Sabha election - “Both Delhi and Dispur have changed their stand on the matter. They are both trying to avoid the matter. Every time there is an election, the parties and leaders come and promise of granting the ST status and then when they come into power they forget it.”

A top government official said, “The process is progressing well towards the final stages, but the issue of granting ST status to the communities has been a major hurdle in the talks. Since the matter is handled by several agencies like Registrar General of India, Ministry of Home Affairs, tribal welfare ministry and the PMO, it takes time.”

Without the ST status protection, the Adivasis are highly vulnerable. They have been allegedly targeted by both the administration and militants in the region, do not enjoy rights as forest dwellers, and are victims of evictions and harassment from various government agencies. In 2010, over 1,400 Adivasi families living in Ripu-Chirang forests in Kokrajhar and Chirang districts (bordering Bhutan), were evicted. On December 23, 2014, a faction of the National Democratic Front of Boroland (NDFB) militant group gunned down 67 settlers from the Adivasi community in Kokrajhar and Sonitpur districts.

The oppression and violence against the community over time has forced hundreds of Adivasi youth to take up arms. In the early 2000s, the state witnessed an upsurge of five such groups - the All Adivasi National Liberation Army (AANLA), Adivasi Cobra Militant Army (ACMA), Birsa Commando Force (BCF), Santhal Tiger Force (STF), and Adivasi People’s Army (APA). In 2012, when former Home Minister P Chidambaram promised to grant ST status to their communities, these organizations surrendered and laid down their arms.

Following their surrender, according to Birsing Munda, general secretary of the Adivasi National Convention Committee (ANCC) and former commander-in-chief of the BCF, the government allegedly did not hold peace talks with them - “We have been cheated, duped and overlooked by both Delhi and Dispur. If the government doesn’t grant ST status to us by early 2019, we will be compelled to launch an array of protests in a more intense way this time.”

In March 2018, train services of the Northeast Frontier Railway (NFR) via Fakiragram junction of lower Assam’s Kokrajhar district, were disrupted for nearly six hours following a rail blockade call at Kokrajhar railway station by the ANCC. Following these protests, the Centre in July held a meeting with the representatives of tea workers communities of the state - Moran, Muttock, Tai-Ahom, Koch-Rajbongshi and Chutia - in New Delhi. According to reports, the meeting ‘failed’ to make any headway for lack of seriousness on the Centre’s part to resolve the issue.

The Assam government had sent a proposal to the Centre, which had constituted a modality committee in February 2016, to include these communities in the ST category. Two years later, the committee is yet to submit its report.