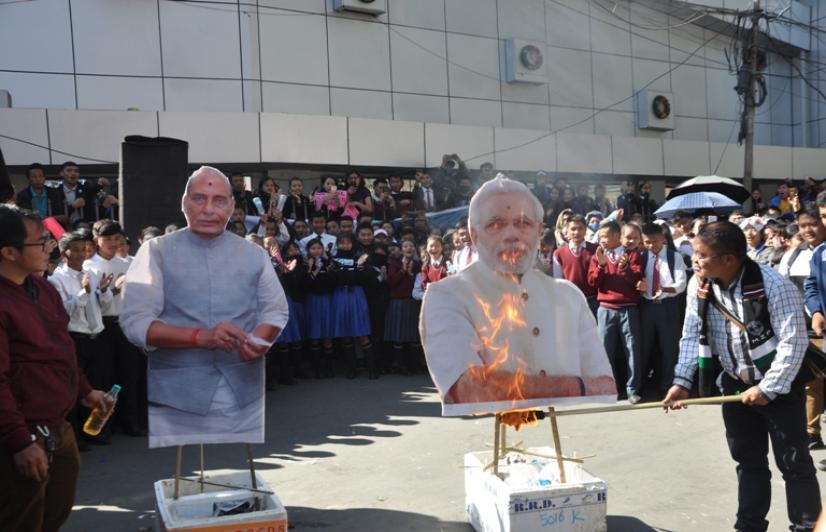 In Mizoram, Citizenship Bill throws spotlight on Chakmas; protest reflects the sense of “being neglected” on Mizos

The entire northeastern region is currently on the boil over the controversial Citizenship (Amendment) Bill, that seeks to grant Indian citizenship to non-Muslim minorities, who fled religious persecution from Afghanistan, Bangladesh and Pakistan.

The passage of the bill by Lok Sabha on January 8 has further triggered a series of protest in the region including Mizoram, where a massive protest was held by students on January 23 and subsequently a boycott of Republic Day celebrations.

Unlike in Assam, where illegal migration of Bengali Hindus from Bangladesh was the main issue brewing over a decade, in Mizoram the Citizenship Bill has put the spotlight on the Chakma community, whose alleged illegal influx from neighbouring Bangladesh was perceived as a big threat to their existence by the indigenous Mizos.

The protests against the Citizenship Bill also reflects, among the Mizos the feeling of “insecurity” and “being neglected” by the Centre.

Spearheaded by the state’s apex student body, the Mizo Zirlai Pawl (MZP) or Mizo Students’ Federation, massive rally was organized across Mizoram on January 23, where thousands of people, mostly students took to street to protest against the Citizenship Bill.

In the state capital Aizawl, where the main protest rally was held, over 30,000 people responded to the call given by the MZP.

Apart from chanting the slogans of “Down with BJP government” and “scrap citizenship bill,” the protesters carried several placards that read, “Hello China, Bye Bye India,” apparently to convey that the mongoloid Mizos were “neglected” and “not safe” in their own country. The “Hello China, Bye Bye India,” slogans also reflected the “desire” to be a part of China, under whose rule the Mizos expects better “care and concern” due to their close Mongoloid trait.

The growing feeling among Mizos is that India does not care about them anymore and the Centre is just dictating terms from miles away instead of trying to know the pulse of the people and the region. North East Students’ Organisation, an umbrella body of students’ organisations in the region, and many others are of the view that it is better to look at China for assistance instead of relying on the Central leadership of India.

The protesters also burnt the effigies of Prime Minister Narendra Modi and Home Minister Rajnath Singh to indicate their strong dislike against the BJP government, which introduce the bill in 2016.

India has tasted a similar bitter pill when Nepal started cozying up to China in 2018, giving a clear cold shoulder to the nation it considered its ‘big brother’ for decades. The trouble started when Nepal’s political parties felt that India is trying to interfere in the new constitution of the Himalayan nation. The road blockade and protests in Terai region made the matters worse between the two countries with Nepal’s Prime Minister KP Sharma Oli blaming India for an economic blockade.

However, this time India has something brewing within its own territory.

While for protesters in Assam and other northeastern states like Meghalaya and Tripura, the concern is about Hindu immigrants from Bangladesh, Mizoram, like Arunachal Pradesh, has a different issue. The concern is not about the Hindu immigrants, but “illegal influx of Buddhist Chakmas” from neighbouring Bangladesh, which is seen by most Mizos as a big threat that will shrink the natives to minority in their own land in near future.

At least 100,000 Chakma and Hajong refugees from Bangladesh’s Chittagong Hill are staying in Arunachal Pradesh for over 50 years. The Union Home Minister Rajnath Singh last year held discussions with Arunachal Pradesh Chief Minister Pema Khandu over the issue of granting the refugees Indian citizenship. Since 1990, the All Arunachal Pradesh Students’ Union has been demanding their ouster from the state.

According to MZP president L. Ramdinliana Renthlei, the citizenship bill, if enacted, would be harmful for Mizoram as it would bring severe religious and demographic impact on the indigenous Mizos.

He expressed apprehension that the indigenous Mizos will become minority in their own land if the “illegal Chakma immigrants” are given citizenship.

The Chakma people are an ethnic tribal belonging to Tibeto-Burman group, whose origin is believed to be greater Arakan Yoma North, presently Chin State, before they migrated to Chittagong Hills Tract (CHT) in Bangladesh in the fifteenth century. However, most Chakmas considered CHT as their ancestral home.

Their migration to India took place when Radcliffe Award of Bengal Boundary Commission awarded Chittagong Hills Tracts to Pakistan during partition of Indian sub-continent in 1947.

The construction of Kaptai Dam and Karnafuli reservoir in 1962, which rendered thousands of Chakma families homeless also triggered large scale migration to India, especially in Arunachal Pradesh and Mizoram. Mizo historians recorded that some Chakma people had come to Lushai Hills during the British period in 1870s. But during those days the colonial rulers charged them ‘tax” to indicate that they are foreigners and permanent settlement was denied to them in the Lushai Hills (now Mizoram).

Mizoram has, currently, a population of about 12 lakh of which the Chakmas are believed to constitute more than 10 per cent.

The decadal growth rate of the Chakma population, as alleged by the student body, was beyond normal rate of human production but possible only through illegal influx, which the community denies.

Quoting a report submitted by the Mizoram government to NHRC in 2015, some Chakma activists said the Chakma population was only 96,972 in 2011.

There is a perception among the majority Mizos that many Chakmas have crossed the state boundary in the 1960s and they are not considered indigenous people of the state.

Renthlei alleged that there are over 30,000 illegal Chakma immigrants from Bangladesh.

“We don’t target the entire Chakma community as many of them have legally resided for decades in Mizoram. But we are against those who have illegally migrated from Bangladesh,” he said.

Vanlalruata, president of Young Mizo Association (YMA), the largest civil body in the state, said that the Citizenship Bill is dangerous for Mizoram as it will not only grant citizenship to illegal Chakma immigrants but also attract illegal influx from Bangladesh. “Though they are negligible as of now, the Chakmas will become a big threat for the Mizos in near future because their number is increasing very fast. There is possibility of the Mizos becoming minority in their own land if illegal Chakma immigrants are given citizenship,” he said.

The agitation against the Citizenship Bill was intensified with the boycott of Republic Day by NGO Coordination Committee, a conglomerate of major civil societies and student bodies.

Only ministers, legislators and top officials were allowed to take part at Republic Day celebration in Aizawl where state governor Kummanam Rajasekharan addressed almost an empty ground. According to the committee chairman Vanlalruata, the boycott call was given to draw the Centre’s attention.

He said that they have submitted multiple representations to the Prime Minister, Home Minister and Joint Parliamentary Committee over the bill, but the Centre did not pay attention to their appeal.

The state government and all political parties including the ruling Mizo National Front (MNF) and state BJP are vehemently opposed to the bill.

All opposition legislators skipped Republic Day celebrations in support of the call given by civil bodies to oppose the proposed legislation.

Chief Minister Zoramthanga had earlier warned that his party would pull out of the BJP-led North East Democratic Alliance (NEDA) if the Centre passes the bill.

The state cabinet led by Chief Minister Zoramthanga also had earlier expressed disappointment over the passage of the controversial bill by the Lok Sabha and resolved to take steps to ensure that the bill is not passed in the Rajya Sabha.

In September last year, all political parties, civil societies and student bodies submitted a joint memorandum to the Centre not to pass the bill but reconsider it to uphold the dignity of secularism to the constitution.

Mizoram shares a 72-kilometre border with Bangladesh and Myanmar. This gives the state a strategic advantage as it is a transit point for trade with both these neighbouring countries. However, if the same happens with Mizoram, India will have another Arunachal Pradesh-like situation to tackle and losing another defence strategic point is not something that India can afford to do.