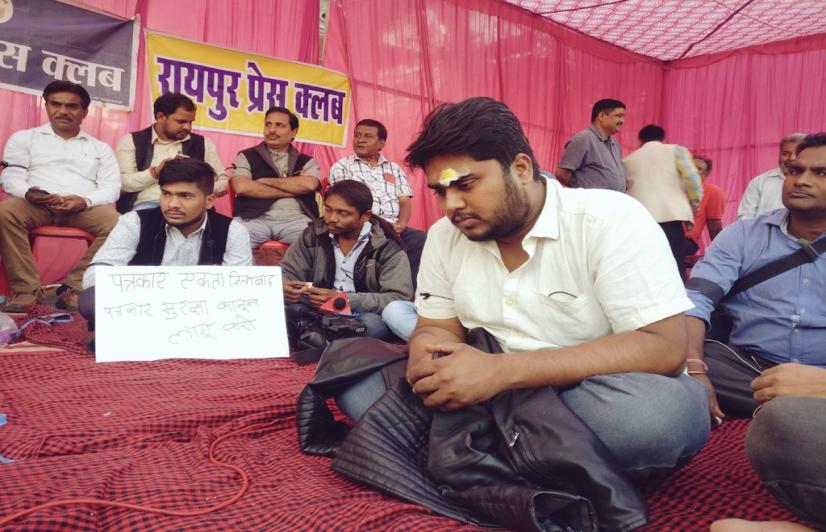 Raipur: The challenges journalists faced during the 15-year BJP rule in Chhattisgarh do not seem to have diminished with a fresh case of assault of journalists at the saffron party office in state capital Raipur reported last Saturday. Journalists, including women, covering a review meeting called to analyse Bharatiya Janata Party’s assembly election defeat at district-level were assaulted by party workers as they recorded a brawl that had broken out among the workers.

According to a First Information Report (FIR) based on complaint filed by Suman Pandey, a senior reporter for regional news portal thevoices.in, and his colleague Vinod Dongre, BJP disitrict president Rajiv Agrawal, along with party office bearers Vijay Vyas, Utkarsh Trivedi and Deena Dongre were involved in the assault.

Pandey says they were called to the BJP office at Ekatma Parisar in Raipur at 4.00 pm on 3 February to cover a review meeting. “I saw some manhandling between BJP members and started recording with mobile. The BJP persons saw this and came towards me. They were four and they started hitting me. They were asking me to delete the video and snatched my mobile and deleted the video. They kept me hostage for 20 minutes,” says Pandey. He told his colleagues about the incident after stepping out of the BJP office.

Reacting to the allegation, main accused in Saturday’s incident, BJP district chief Agrawal called it “unfortunate”. Claiming that the BJP has always respected journalists, Agrawal said that on Saturday, all journalists were asked to leave after meeting, but a boy did not move. According to Agrawal, “He was sitting there making videos and was sending (those) to someone. When asked for identity card, the journo said he doesn't have one. When BJP members requested him to delete the video, he refused.”

After persistent protest by journalists outside the BJP office in Raipur, the four accused were arrested late Saturday night under Section 342 ( wrongful confinement), Section 506 (criminal intimidation ) Section 323 (voluntarily causing hurt)  and Section 34 (common intention) of Indian Penal Code (IPC), but were released on bail later. Journalists continued demonstratjoutside the Raipur press club throughout Sunday and those in other parts of the state also joined in voicing the concern for a safer atmosphere for scribes. Protesting journalists have said the agitation will go on indefinitely unless the accused BJP members are suspended from the party.

Youth wing members of the BJP also threatened journalists not to hold demonstration against the party on the issue, those who participated in the protest claim.

Devesh Tiwari, a video journalist with Zee News Chhattisgarh who sat in protest at the Press Club, criticises the BJP for not having taken any action even 24 hours after a scribe has been attacked at party’s district office. “No culprit has been terminated yet. BJP party president, Dharamlal Kaushik, and Raman Singh have to decide whether they are with three-four goon-like party workers or with journalists. We will protest this act of BJP,” says Tiwari.

BJP members shoved and misbehaved with women journalists as well on Saturday, says Mamta Lanjewar, a TV journalist who was covering the incident. “We will continue the protest. Not only journalists but democracy is in danger. We are fighting against attack on freedom of expression. Even a woman journalist was held by her hand and dragged out. If we are not safe at the BJP office between public representatives, then where are we safe?” Lanjewar questions.

Looking at the last couple of decades, Chhattisgarh has been turning into a hostile state to report from for journalists. From Left Wing Extremism-hit belt of Bastar to the mining belt of Sarguja, more than 200 journalists of the state have faced threat, violence, legal abuse and even death because of their work. While at times, the state authorities have labelled them as communist naxals because of reporting from the ground in Bastar region, at others, political parties have tried to teach journalists a lesson when their misdeeds lie exposed. Nemichand Jain, a journalist from Bastar, witnessed this dilemma when he was shot and killed by Maoists on February 12, 2013, while the government considered him a Maoist supporter.

New York-based Committee for Protection of Journalists (CPJ) in 2016 had expressed its concern over deteriorating climate for the press in Chhattisgarh. The organisation even wrote to the then chief minister, Raman Singh, asking him to ensure a safer working environment for journalists, but never received a response.

Sanjeev , who has reported from Chhattisgarh for around 15 years, says “journalism suffered a lot” in the state because of the manner in which “many media houses were pleased”, journalists were given job or terminated from work as per the will of government, and due to planting of news. “The BJP government and its officials had assumed they can do anything with power and money. They have to keep themselves aware of the fact that they are out of power now,” says Sanjeev.

The Raipur party office of BJP had witnessed another altercation with journalists when BJP’s central leaders during a press conference called last week had accused journalists of being Congressmen. As journalists protested, the BJP claimed the issue was being “politicised”.

During the BJP rule of 15 years, a committee for safety of journalists was set up, but only one meeting was conducted during a span of two years, indicating the insensitive attitude of the party towards journalists.

In March, 2016, when a team of Editors' guild visited Bastar, they found media reports of threats to scribes to be true . The team observed that journalists in Chhattisgarh are under attack of both, state and non-state actors, and are working under great pressure.

In the past, Prabhat Singh, a Dantewada-based scribe who was working for Hindi daily Patrika, was booked under section 67 and 67A of IT Act for a social media comment over a Bastar police officer. Another journalist who has worked with Patrika in past, Santosh Yadav, lost 17 months of his life in jail when Bastar police, based on a statement by STF commander Mahant Singh, booked him in September 2015. Yadav alleges he was trapped in a false case and says he is "shocked".

Bastar-based journalist Kamal Shukla, who had recently taken out a demonstration seeking a law to ensure safety of journalists, was booked for sedition in 2018 for sharing on social media a cartoon that had a satirical take on BJP office bearers' reaction to justice Loya's death. He says nearly 250 cases were registered against journalists and human rights activists during the BJP regime in state. “BJP members are still thinking it’s their government. They have the habit of coaxing journalists to work as per their desires. A journalist safety law is urgently needed as was promised before the polls by Congress,” says Shukla.

Agreeing that the new government should pass a law for journos’ protection, Amit Jogi of Janta Congress Chhattisgarh (JCC) says that strict action should be taken against those who manhandled journalists. “It shows the BJP workers’ irritation,” he says.

Chief Minister Bhupesh Baghel says that his government will not tolerate such incidents. “Regarding safety of journalists, I repeat my commitment. Our government is moving ahead for making a journalist safety law.”