Caste influences what voters decide in UP, Bihar 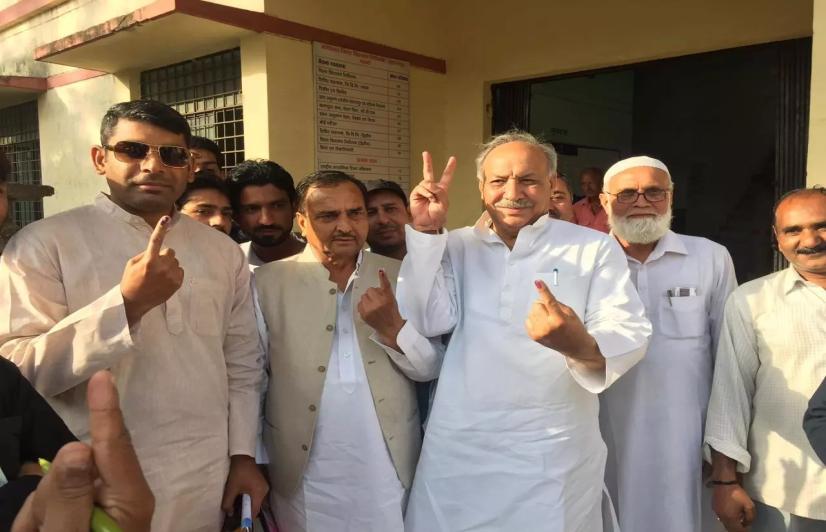 Bihar: As the first phase of voting for the 2019 Lok Sabha elections concluded across eight constituencies in Western Uttar Pradesh and four in Bihar on Thursday, caste was an important factor in both states. From poll alliances to caste-based voter preferences, the elections saw a good turnout. The elections were also marked by minor incidents like faulty Electronic Voting Machines (EVMs), spurts of violence and allegations of voters being bribed.

Voting in eight constituencies  of western Uttar Pradesh concluded on a peaceful note on Thursday. An hour into polling, allegations began to emerge around faulty EVMs, voting malpractices and attempts being made by political parties to bribe voters with ‘ NaMo’ food packets being found in vehicles.

Polling in several booths in Gautambudh Nagar, Saharanpur and Meerut began much later than

scheduled. The district magistrate of Saharanpur informed the media that over 100 EVMs were quickly replaced because of technical snags.

Violence erupted in Kairana when security personnel stopped around 25 people, who were forcefully trying to enter a polling booth to cast their votes without proper identification. Security personnel resorted to aerial firing and mild lathi-charge to disperse the crowd. A Dalit person alleged that he was prevented from voting because of his caste. However, the additional district magistrate, Anand Shukla in his enquiry found this to be untrue, where the man had not been allowed to vote as he failed to furnish valid identification.

The eight constituencies that went to polls on Thursday could pose a challenge to BJP, by supporting the coalition (SP+BSP+RLD). In Kairana, BJP had denied a ticket to Mriganka Singh, who had lost the 2018 by-elections by a small margin. In Muzaffarnagar, which has a larger Muslim population the battle was between Jat leaders  Sanjiv Baliyan and Chaudhary Ajit Singh. The coalition candidate, Ajit Singh seemed to have the support of Jatavs, Muslims and the Jats of a particular khap.

With more than 42 per cent of the population comprising of  Muslims, Saharanpur is one of the highly polarised constituencies in UP. Here, the battle was between Congress’s Imran Masood, BJP’s sitting MP Raghav Lakhanpal and the coalition candidate Haji Fazlur Rehman.

In 2014, Raghav Lakhanpal had defeated Imran Masood by 65,000 votes. BJP had a 39 per cent vote share, followed by Congress at 34 per cent, BSP with 19 per cent and the SP with 4 per cent. Meerut has been BJP's stronghold for the past two decades.

The BJP has again fielded twice-elected MP, Rajendra Agrawal, who represents the constituency in the Parliament against Congress' Harendra Agrawal and the coalition's Haji Yaqoob Quraishi.

First phase of polling concluded in four Lok Sabha constituencies in Bihar. Initially, people turned up in large numbers to cast their votes but malfunctioning EVMs, and minor incidents of violence hampered the total voters' turnout. The four seats which went to polls on Thursday were Gaya, Nawada, Aurangabad and Jamui. According to the Election Commission, Bihar recorded the lowest turnout at 50 percent.

In select booths, polling was delayed due to security reasons.  This is likely to be a challenging election season for the NDA though they had won all the seats in the 2014 elections. This time the Mahagathbandhan comprising RJD, Congress, Hindustani Awam Morcha (Secular) (HAM-S) and Vikassheel Insan Party (VIP) has given tickets based on caste calculations.

Former chief minister of Bihar, Jitanram Manjhi is contesting from Gaya as part of the Mahagathbandhan. The BJP's Hari Manjhi won the last two consecutive elections in 2009 and 2014 in Gaya. This time the seat went to JDU's Vijay Manjhi. Gaya recorded nearly 56 per cent voting.. Gaya had polled at 53.93 per cent in the 2014 elections. The caste equation is not favourable to JDU, as they had come third in the last elections and RJD had secured the second position.

Since JDU is aligned with the BJP, they are likely to lose the lower caste voters, which could favour RJD that has been campaigning using the social justice platform.

Another key element that could impact the elections, is the liquor ban that had impacted the backward community in the region. Most of the backward communities depend on local liquor trade. They were faced with police action following a liquor ban. Jitanram has assured voters in Gaya about withdrawing the ban, if he gets elected.

Jamui will also prove to be a challenge for LJP candidate, Chirag Paswan, the Bollywood actor-turned politician and son of Ram Vilas Paswan, who is contesting from this seat for the second time.

RJD has given this seat to RLSP candidate Bhudeb Chaudhury, who had won this seat in 2009 on a JDU ticket. Bhudeb is from the Pasi community and has a good hold on the Musahars, Koiri (Kushwaha), Bind and OBCs, which together comprises around 3 lakh voters. Apart from that RJD's MY (Muslims and Yadavas) combined vote is over 4 lakh, which is likely to go in favour  of (if not full then a sizeable number) to Bhudeb. Local sources state that the Rajput leader, Nagendra Singh is upset with the NDA and will not be supporting Chirag.

In 2014, despite the Narendra Modi wave, this seat had recorded low voting turnout at only 50.01 per cent. Jamui, which has around 19 lakh voters, had recorded 54 per cent votes this time.

BJP's Giriraj Singh had previously announced that if he were not given a ticket from Nawada, he would not be contesting the 2019 elections. Giriraj had won this seat in 2014 by a remarkable margin of around 1,40,000 votes. According to political experts, Nawada has a large population of Bhumihar voters. Since Giriraj belongs to that community, he was expecting an easy victory. But, this seat went to LJP's Chandan Kumar, the younger brother of Bahubali leader Surajbhan Singh. RJD's ticket went to Vibha Devi, wife of tainted leader, Rajballabh Yadav.

Incidentally, Nawada has never had a local leader in a while. All candidates who have so far won from this seat were parachuted here from other districts and present candidates Vibha and Chandan are also outsiders.

In 2014, the constituency had recorded 52.78 per cent voting. In 2014, JDU had fought the elections alone and secured 1,68,217 votes in Nawada. If these votes get transferred to LJP, then it would be an easy win for Chandan.

Nawada had witnessed communal violence during Ramnavami in 2018. The scale of the violence was such that Chief Minister, Nitish Kumar had to warn people to maintain calm.

Aurangabad is called as the Chittorgarh of Bihar because it has a large Rajput population. They hold a lot of political clout such that not a single non-Rajput has won from this constituency. Sushil Kumar Singh, who belongs to the Rajput community has won three times on different party tickets. This time, he is contesting on a BJP ticket. The Mahagathbandhan has given this seat to HAM's (Secular) Upendra Kushwaha, who is from the Koiri (Kushwaha) community. Upendra was earlier with JDU.

According to sources local Congress leader, Nikhil Kumar was demanding a ticket from Aurangabad but was denied. So his supporters are angry with the Congress decision and this is likely to harm the Mahadaghbanghan candidate.

Aurangabad had recorded 49.85 per cent votes, the lowest among the state’s constituencies this time, although  it stood at 52.78 per cent in 2014. In 2018, Aurangabad was in the news because of incidents relating to communal violence during Ramnavami. Several minority-owned shops were ransacked by miscreants and shopkeepers had alleged that BJP had a role in these incidents, which the party had denied. Since the shopkeepers continue to be angry with the BJP, this will impact their ally the JDU candidate too.