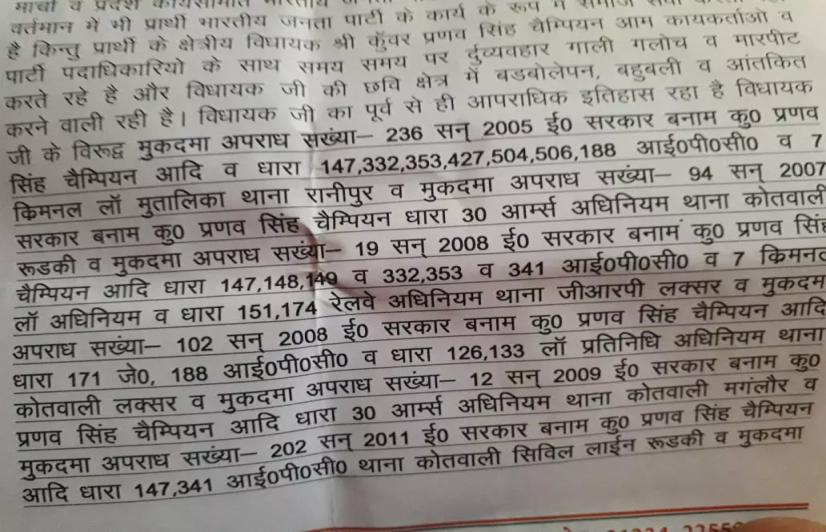 Uttarakhand: After Uttarakhand MLA Kunwar Pranav Singh’s political career received a blow following his expulsion from Bharatiya Janata Party (BJP), he has reportedly been approached by controversial reality show Bigg Boss to be a contestant.

Singh, also known as Champion, is an MLA from Khanpur constituency in Haridwar district of Uttarakhand. Over the years, Champion has developed a taste for controversy, and recently a video of him brandishing multiple weapons—including rifles and pistols—went viral. In the video, he was also seen insulting the state. After the video went viral, the BJP state leadership expelled him from the party for six years.

While his political career is proceeding on a negative trajectory, new opportunities have opened up for this maverick figure since he was propositioned by the show hosted by Salman Khan. The new season of Bigg Boss is expected to go on-air in September.

Recently, as per the report by Senior Superintendent of Police (SSP), Haridwar's District Magistrate ordered Singh to surrender his licensed weapons to the nearest police station.

This was not Singh’s first brush with controversy. Even in the past, he has been known for his infamy and notoriety, which is supposed to work for him with his "housemates".

Vinay Singh Gujjar, Singh’s personal assistant, told 101Reporters that while Singh had received a call from Bigg Boss, “it is only vidhayak ji who will confirm.”

Dr Devendra Bhasin, state media in-charge for BJP, said the party has nothing to say about his invitation from Bigg Boss since he is not a member of the party now.

Garima Dasauni, a Congress spokesperson, said it is both sad and laughable that Pranav Singh has been chosen as a contestant of Bigg Boss. “It puts a question mark on seriousness, credibility and the mindset of the programmers, who treat such notorious people as a hero in front of the public,” she stated while adding that this gives rise to a negative trend.

She asserted that his shameful acts should have been condemned by everyone, including the media. “It seems that the MLA is aware that Khanpur constituency is not going to choose him as their representative in the coming elections, thus he is looking for a second career,” she added.

The past is witness to Singh’s affair with controversy. Before this, the renegade politician had reportedly opened fire in public places. Police records are a testimony to the dozens of cases filed against him, even under the Arms Act.

Another video featuring Singh went viral last year where he was seen watching a bar dancer perform. In 2003, he was named in the murder of a crocodile in Luxar, Kotwali in the district of Haridwar.

In 2012, he had opened fire in a dinner arranged by a former minister at his residence in Dehradun, in which two leaders sustained injuries, while the Speaker and minister escaped.

Recently, he had allegedly summoned a journalist to his room and threatened with his pistol.

While Singh has come out explaining his drunken misdemeanour to the people of the state, he also blamed the media for not showing the developmental work carried out by him in his constituency.

After the formation of Uttarakhand, Singh has been elected four times in the state assembly elections. In the first general elections of the state in 2002, he was elected as an independent MLA from Luxor in Haridwar district. After that, he joined Congress and won the elections in 2007 from the same seat. He won again in 2012 on a Congress ticket from Khanpur seat.

He was one of the rebels, who tried to overthrow the Congress' Harish Rawat government in 2016. He was later disqualified by the Speaker, along with the other rebels.

After that, he joined the BJP and won from Khanpur in 2017. Before becoming a legislator, he was also the District Panchayat president of Haridwar.

On July 13, on a Facebook post, Harish Rawat, former Chief Minister, said, "An MLA has been condemned everywhere for unrestrained delirium and unfair treatment against Uttarakhand. The entire Haridwar and Khanpur areas are also unhappy with their abusive remarks and are condemning them. My prayers to the people of Uttarakhand's siblings and, particularly, the state agitators, do not give importance to such persons and their such inconsistent comments. This also increases the promotional importance of such people and support also increases. Leave this matter at the discretion of Khanpur and Haridwar that whatever punishment they want to give him."