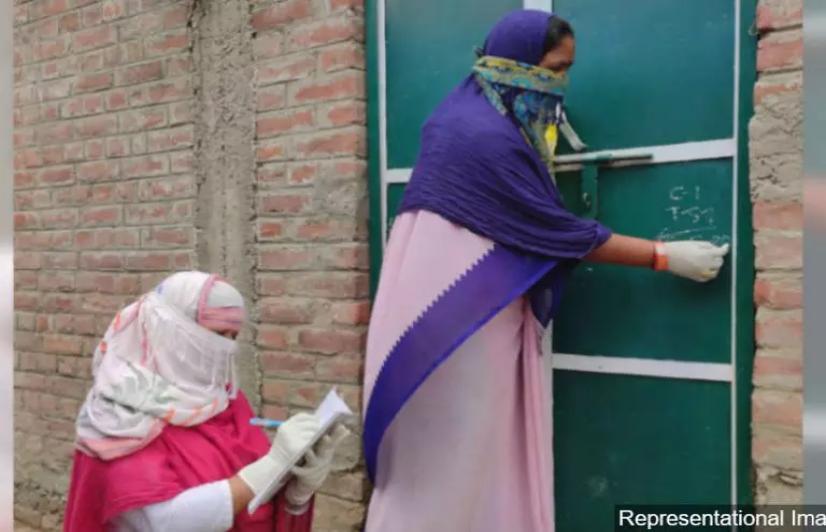 "We have not been given thermal screening machine to check the fever of a suspect (suspected COVID-19 case). So, we only ask people in the survey whether they have any travel history or if they have cold, cough or shortness of breath," said Chunni Kumari, an ASHA worker from Kesariya town in East Champaran district in Bihar, talking about the state government’s door-to-door screening process to find out coronavirus affected people.

The novel coronavirus knocked on Bihar’s door on March 22 when the state recorded two positive cases out of which a 38-year-old man died at the All India Instituted of Medical Sciences in Patna.  As of that day, just three days before the entire country went into a complete lockdown, Bihar had only one testing centre and three sample collection centres. These numbers show how prepared the state government was to deal with the pandemic.

As the COVID-19 cases started rising, the state government introduced the door-to-door screening to spread the testing net. However, this time too, the testing doesn’t seem to be done adequately given the method the teams involved in the process are following.

Each ASHA worker has been given two masks and a register. Meera Sinha, an ASHA worker working in the outskirts of ​​Patna, told IndiaSpend, "We go door-to-door to find out whether someone has come from abroad or from another state. Apart from this, we also ask them if they have cough, cold or chest pain.”

During the door-to-door screening, if ASHA workers find that any family has member/members with travel history (from abroad of within country) they mark the house with white colour. ASHA workers submit the register to Sadar Hospital where the doctors study the details and inform the in-charge at the respective blocks to call the suspected person to the hospital for sample collection.

“The ASHA workers have not been given any other safety equipment other than two masks, so they are in fear of getting themselves exposed to coronavirus,” rued Chunni Kumari.

A doctor posted at a sub-divisional government hospital in Samastipur district told IndiaSpend on the condition of anonymity, "If the register contains information about any patient who is suffering from cold, cough or breathing or they have returned from abroad or other states, we call them for samples collection. We collect samples in the hospital and instruct them to stay in quarantine until the results come."

"Sometimes the patient is not ready to come to the hospital saying that he does not have any symptoms. In this situation, we seek the help of the police. The team of police and doctors go to the suspect and bring him/her to the hospital for sample collection,” the doctor added.

The screening is not enough

A well-known health expert, Dr Arun Shah who runs a private hospital in Muzaffarpur, praised the government’s efforts of door to door screening but cautioned about the loopholes. He told IndiaSpend, "Since ASHA workers don't have thermometer, they cannot read temperature of suspected persons. Temperature is very common symptom of coronavirus. So government should provide these workers digital thermometer which is very cheap compared to infrared thermometer."

He further said, "India has 130 crore population so it not practical for this country to test each and every person. But it can use the effective way. Door to door screening is a welcome move but there are chances that asymptomatic person may skip the door to door screening as he/she will not have any clear symptoms. In this case thermometer can be helpful."

The Bihar government has given proforma to private practitioners so that corona suspects can be identified at private clinics also.

Dr. Shah said, "We have been given a proforma, where we take details from inpatients such as if he has travel history and which kind of symptoms he is experiencing etc. We give these details to nodal officer appointed by state govt."

Few families IndiaSpend spoke to, said that the door-to-door screening is not done properly.

Narayan Giri lives in Varuna Village of Rohtas district. He told IndiaSpend, "Sevika (Anganwadi worker) came to my house and asked for the names and ages of my family member. We told them the details. Sevika didn't ask if any members in my family have cough, fever or shortness in breathing. Even they didn't ask if any member of my family has travel history. After asking the detail they marked on my wall with certain number and date."

"Not only this, the Sevika asked me the details about adjoining houses and recorded the details in register and left."

Rohtas district has witnessed a spurt in coronavirus cases in last two weeks. The first positive case of coronavirus in Rohtas was detected on April 21. Now the district falls under red zone with 52 covid-19 positive cases.

Around 86,18,085 houses have been screened till May 1, according to health department. According to the data of the Health Department, so far 4,68,44,880 people have been screened, out of which 37 people had travel history  of abroad whereas 379 people had returned from other states of the country. As per the data, survey work has been completed in Begusarai, Gaya, Nalanda, Nawada, Sheikhpura and Siwan.

The first testing lab for coronavirus infection in Bihar started on March 7, five weeks after the first case of corona infection in the country. At present, six testing labs are operating in Bihar - four in Patna and one each in Muzaffarpur and Darbhanga. Rajendra Memorial Research Institute of Medical Sciences (RMRIMC), which works under the central government, has the highest number of 15,908 samples (till May 2) tested. As of May 2, 25724 samples have been screened in all the six labs, which is just 0.024 % of the total population of Bihar (the population of Bihar is 10.41 crore as per 2011 census).

But, from April 16, Bihar Government started door to door screening in four cities Nalanda, Nawada, Siwan and Begusarai on the lines of Pulse Polio Campaign. Accredited Social Health Activist (ASHA), Jeevika and Anganwadi workers have been given the responsibility for the same. On April 23, Chief Minister Nitish Kumar announced to extend the door to door screening to entire Bihar.

Total corona positive cases stood at 476 till May 2 evening in Bihar and four deaths have been reported. If we look districts wise tally then Munger tops with 95 cases followed by Rohtas with 52 and Buxer with 52 cases. Patna, state capital has recorded 44 positive cases. Total 30 districts are affected with this pandemic. Spread of the virus in Bihar can be understood with the disturbing data of last one week. According to data obtained from State Health Department, roughly 76.68% cases (365 cases) of covid-19 positive have come in just eight days. This data paints grim picture of Bihar which is lagging behind in health indices. It also indicates that cases might increase in coming days.

A representative of Care India, an NGO which is working with the Bihar government in its healthcare efforts, told IndiaSpend, “After frontline workers submit the screening report. Medical team checks the report and if team found any suspect who has symptoms or has travel history, then the team visits the household. The team includes one doctor and two health workers. The team again screen the suspected person and if team feels that the person needs to be tested then he is send to hospital with ambulance to give swab.”

The person pleaded anonymity as he is not in a position to issue an official statement.

State Epidemiologist and nodal officer for Covid-19 Dr. Ragini Mishra told IndiaSpend, "Under door to door screening, samples of the suspected people with signs of infection are taken and send to testing lab."

Nalanda district civil surgeon Dr Ram Singh told IndiaSpend about the procedure of testing the samples and the post-result activities, "If the test report of the sample comes positive, then the patient is sent directly to the Corona designated hospital in Patna and if it comes negative, then the suspect is kept in quarantine for another 10 days. After 10 days his sample is taken again and sent for examination. If the result is negative for the second time also, the suspect is released.”

In recent times the discussion of adopting plasma therapy technique for the treatment of coronavirus infected patients was in the news. Many states have started preparing to try the plasma therapy, but in the meantime the Ministry of Health has made it clear that there is no research suggesting that plasma therapy can be used to treat corona patients. However, in the recent past, from the Yogi government of Uttar Pradesh to the Telangana, Maharashtra, Delhi, Gujarat Governments have asked for a trial on plasma therapy. However, the Bihar government is not considering it.

Epidemiologist Dr. Ragini Mishra told IndiaSpend, "Most of the patients who have got coronavirus infection do not show any symptoms. Their treatment is also not much needed, so we are not considering plasma therapy right now.”

Since the first case of coronavirus infection on March 22, 91 patients have recovered and returned home. A doctor at Nalanda Medical College and Hospital told IndiaSpend on the condition of anonymity that the patients are being treated on the basis of guidelines given by ICMR. "We are giving HCQS400, HCQS200, AZITHROMYCIN & OSELTAMIVIR to Corona patients", he said.