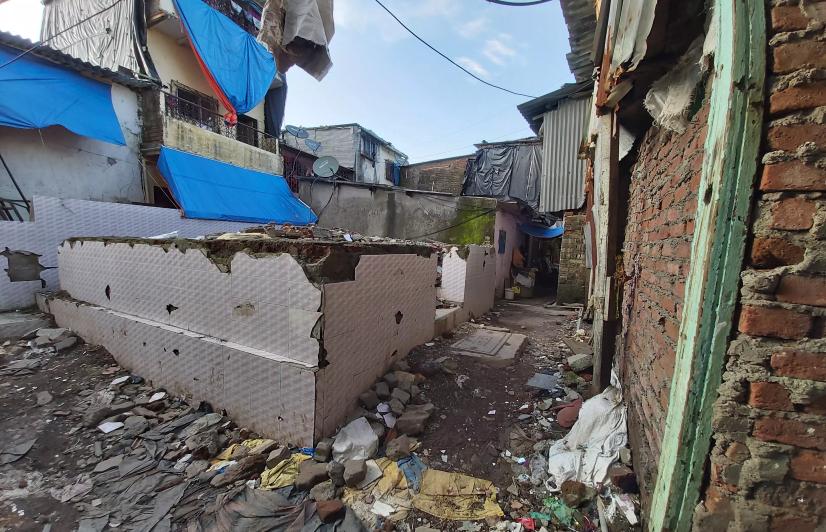 Children playing in narrow lanes, choked gutters, steel shanties and the stench emanating air is how Rafi Nagar looks like in the financial capital of India. Situated in Shivaji Nagar of Mumbai’s M East Ward, residents are forced to pay and use toilets since the free-to-use toilets were demolished last year. However, many residents are not able to afford the charges to access the toilets. As a result, they are defecating in open.

A report by Apnalaya, an NGO, said the average size of a family is over five and the average monthly income only Rs.7,800 in Shivaji Nagar. The low per capita income in the area makes it almost impossible for the inhabitants to pay for using the toilet.

Mahekya Khatoon, 32, a resident of the area and has a family of eight, said her husband earns about Rs 7500 to 8000 every month. “We hardly afford to feed our children. Often, we are left with no money. Tell me how can we pay for using the toilet!” reasoned Mahekya.

Owing to the lack of viable options, many come out of their houses when it is dark and defecate in the open. "Once I was coming home from work late at night I was ashamed to see that women are defecating on the roadside," said Arif Idrisi, a resident of the area.

Dr Naseem Ahmed Khan informed that the toilets charge Rs 3. Even if all the members just make one trip to the toilet, it will be Rs 15 for a day and around Rs 450 for a month, he revealed. “How can people who are not able to pay Rs 100 for necessary medicines pay Rs 450 every month!" argued Dr Naseem.

Lack of money isn't the only problem contributing to open defecation in Rafi Nagar. The ones available are not enough for the population. According to Swachh Bharat Abhiyan, there should be one toilet seat for every 25 people. However, in Rafi Nagar, a survey by an NGO found that there is only one toilet seat per 145 people.

People have to wait for more than 20 minutes for their turn. Ameen Shaikh, 38, a shopkeeper earning Rs 10000 to 12000 a month for a family of five, said he stopped using the toilet in the morning owing to the long queues and instead uses the toilet in the evening when there are fewer people in the queue.

Brihanmumbai Municipal Corporation (BMC) asserted that the free-to-use toilets were demolished as they were unable to maintain the toilets. Toilet seats were soiled and strong odour would emanate from the toilet. "We would think twice before using the toilet. We had to close our nose and mouth to ward off the stench," said Abdul Razzak, 65, a resident of the area.

He further explained that BMC would not come to clean the toilet and the residents of the area had to contribute money to get the toilet cleaned once a month. He stated that BMC can’t be entirely blamed because residents would make the toilets filthy. Moreover, some youngsters would steal doors of toilets and sell them, he added.

The pay-and-use toilets also provide passes to the inhabitants of the area. Each pass costs Rs 100 per month and can be availed by every family which can be used by all family members to access the toilets. However, numerous residents have not been provided with one. Moreover, even area corporator Saira Khan is unaware that passes have not been distributed. "A year ago I was told that 100 passes will be distributed to the residents. But, I don't know if residents received them," she told 101Reporters.

She even alleged that BMC would not pay attention to her incessant requests of cleaning the toilets in the area.

A BMC official from Mumbai M East Ward said the rebuilding work of the toilets will start after the monsoon season.