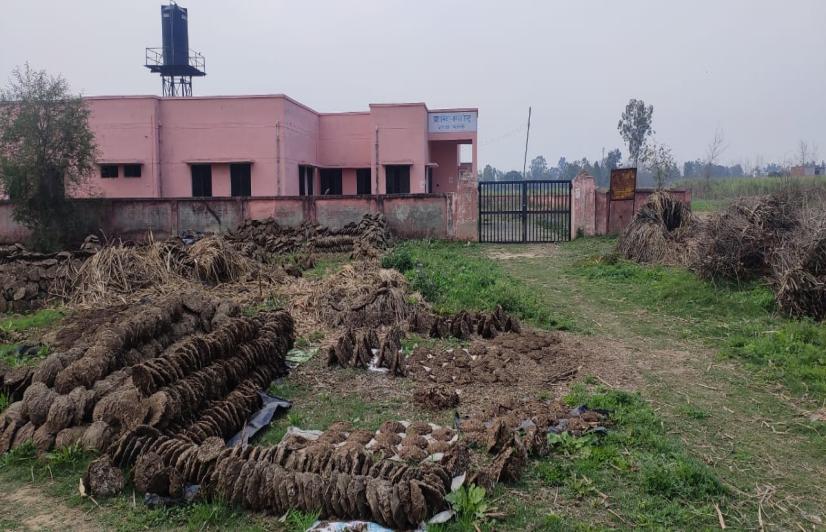 Bijnor, Uttar Pradesh: In 2009, Baruki village in Bijnor district of Uttar Pradesh had got its first Primary Healthcare Centre (PHC). It was supposed to serve about 70,000 people from the nearby areas, but the residents claim that except for the two or three months just after it started, they have not seen any healthcare worker in the hospital. Even during the coronavirus pandemic, the residents have had to travel over 12 kilometres to get medical attention.

Located on Nagina Road, the hospital was supposed to help people from about 40 villages from four blocks of the district. In the 10 years since it was established, 10 Chief Medical Officers (CMOs) have been changed but the situation hasn’t improved. Local residents claim that no staff has been appointed by the district administration yet; and even if appointed, it's only on paper and no one has ever bothered to sit in the hospital to attend to patients.

Owing to the apathy of the health department officials, this PHC is almost in ruins, local residents claim. Thieves haven’t even spared the inner doors and windows. Standing in this hospital complex is itself a challenge. Common people are afraid to come as snakes and scorpions roam around in the hospital. People of the area also stated that owing to the broken doors, drug addicts break into this place and outside the hospital, people dispose of cattle dung.

Kartar Singh, former gram pradhan of Baruki (2005-10), stated that the PHC was built during his tenure, and even though the budget was Rs 77 lakh, the expenditure had come to around Rs 1 crore. Initially, the doctors and Auxiliary Nursing Midwifery staff used to attend to patients there, but after a few days, the staff stopped coming. Many CMOs have been informed about it, but for 10 years, no doctor or staff came here, he added.

Now the windows and doors inside have been uprooted and the purpose for which this hospital was built was never met and all the efforts went in vain, he told 101Reporters.

In cases like dengue, malaria, or other serious diseases, the health of the villagers is left on God’s mercy. Even in the case of minor fever or injury, there is no government hospital in the 12-km range.

Anand Kumar, a 40-year-old resident of Baruki, stated that Baruki is in the middle of dozens of villages but people here are denied government medical facilities. Even for minor bruising, people either have to go to Bijnor by travelling 12 kilometres or to Kotwali, which is 13 kilometres awa. If travelling is not possible, then people have no choice but to visit quack doctors, he highlighted. He added that they are unable to express their problems to the government as the MLA has not visited the area since he won the election.

Rampal Singh, a former gram pradhan of Baruki (2010-15), stated that during his tenure, he appealed to different CMOs, requested them regularly but there was no result. At times, it was assured that a doctor from another hospital had been directed to look at patients for a couple of days each week; however, no doctor ever came to the hospital, he added.

The present gram Pradhan Brahmapal Singh stated that he started approaching authorities for the appointment of doctors and staff in this hospital as soon as he took the office. He stated that he submitted letters and applications to the District Magistrate, visited the CMO and even tried to request the chief minister, but in vain.

Part of the Nehtaur Assembly constituency, Baruki has had Bharatiya Janata Party’s Om Kumar as the MLA since 2012, but he was unaware of the situation, when questioned by the reporter.

He was also unaware that a PHC was established in Baruki and was upset to learn that no doctor has visited the area in 10 years. However, he claimed that he has visited the area multiple times but no one apprised him of the situation. He said, “It’s not possible to go to every house, also no one made me aware of this case.”

Later, through the MLA’s office, it was found that a Dr Sachin was recently appointed by the CMO in Baruki PHC. When the reporter called Dr Sachin to ask about it, he abruptly disconnected the call and switched his phone off.

Dr. Vijay Kumar Yadav, CMO Bijnor, stated that about two months ago, the government appointed Dr Sachin, but owing to the coronavirus pandemic, he is unable to go there.

Ramakant Pandey, District Magistrate, Bijnor, stated that at present, there is a shortage of doctors at many PHCs across the district. He also assured that the problem would be solved as soon as possible.