The toll Covid has taken on healthcare workers 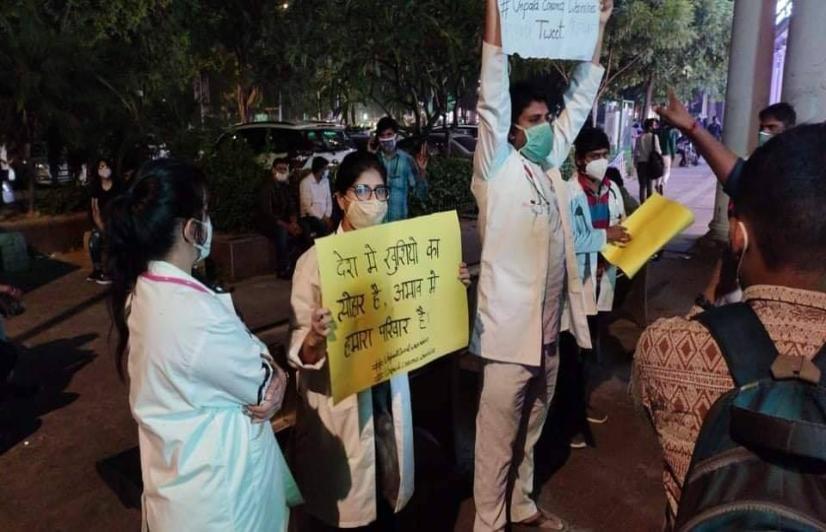 Chandigarh, Chandigarh: Healthcare workers have been under tremendous pressure during the COVID-19 pandemic. Experts point out that apart from the increased risk of contracting the virus, healthcare professionals have to also deal with the lack of personal protection equipment (PPE) kits, wage cuts and burnout from overworking. The current scenario has caused a surge in mental health conditions like depression and anxiety among healthcare workers, studies say.

According to a study conducted by a group of Indian universities, 35.5%, 33.2% and 24.9% of the 217 undergraduate medical students, including resident interns, showed symptoms of depression, anxiety, and stress respectively during COVID-19 outbreak. The study added that many of the respondents also showed symptoms of moderate depression (15.2%), moderate anxiety (17.5%) and mild stress (13.4%).

In December, the Indian Medical Association (IMA) reported that over 700 doctors had died during the COVID-19 pandemic.

A Mumbai-based clinical psychologist, who wished to be anonymous, stated that she has been working with doctors who tested positive for COVID-19. She added that they have been organising emotional wellness, counselling and medication sessions for the entire healthcare staff including nurses, ambulance staff, housekeepers and sanitation workers. She pointed out that most healthcare workers are facing burnout, causing a rise in stress levels.

“The very act of wearing a PPE kit induces anxiety among us. Seeing a lot of human beings die from a virus in front of our eyes and not being able to do anything is going to have long-term psychological implications for healthcare workers," she shared.

According to another survey aimed to assess the mental health of Indian medical students during the pandemic, out of 359 participants (50.4% male and 49.6% females), a total of 75.5% and 74.6% of participants showed varying levels of anxiety and depression, respectively.

Earlier in October, over 2,000 doctors in hospitals and dispensaries run by the North Delhi Municipal Corporation went on to protest and strike for non-payment of salaries for over three months. 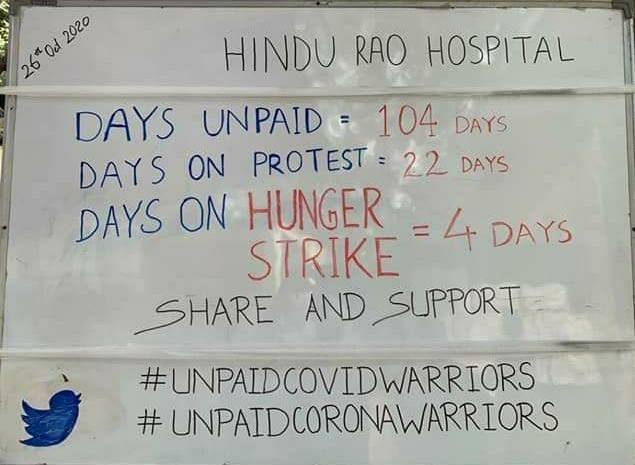 Protests by doctors of Hindu Rao Hospital in Delhi for non-payment of salaries during covid19. Credit: Mani Mahesh Aurora

Several doctors have also reportedly died by suicide. In August, Dr SR Nagendra, a 43-year old government doctor on coronavirus duty, died by suicide in Mysuru district of Karnataka. His colleagues alleged that he was under intense work pressure. Later, investigators stated that Nagendra had been under pressure to meet the targets of coronavirus rapid antigen tests by the chief executive officer of the Mysore Zilla Parishad, who was booked under abetment to suicide.

After this incident, a voluntary counselling and psychiatric service wing for the modern medicine practitioners was started by the Karnataka chapter of the IMA.

Speaking to 101Reporters, Dr KS Karanth, chairman of the Psychiatry Cell of IMA Karnataka, mentioned that the online helpline offers counselling aid to the medicos, the ones especially working on the frontline and going through mental health issues. Psychiatrists, managed by a core body of experts, from across the state are volunteering for the programme, he added.

The most common issues healthcare workers had been facing in the backdrop of the pandemic include stress, panic attacks, and anxiety apart from the pressure and harassment by the administrations and government bodies, he shared.

Forced out of homes

Throughout the nationwide lockdown, there have been reports of medical professionals and their families being harassed and chased away, on the streets by public mobs, from their rented homes by their landlords and neighbours, and even within the hospitals by their co-workers operating in the different departments.

Dr.Shruthi Nagaraj, a doctor with the Bangalore Medical College and Research Institute, told 101Reporters that every doctor in the hospital has been made to go through 10 rounds of one-week of COVID-19 duties, followed by a week each of quarantine. Each shift lasts for at least six hours and there are seven subsequent shifts, she added.

“We go through dehydration during the duties as we can't drink water or pee while wearing the PPE kits. All this while, there has been no other option but to maintain isolation and quarantine, even when we are allowed to be in our homes. I have felt depressed in these times owing to complete social isolation but gradually became accustomed to it,” she mentioned.

She mentioned that several of her colleagues and friends have been forced to vacate their rented apartments owing to the stigma.

Apart from doctors, the mental health of nurses, technicians, ambulance drivers and sanitation workers in hospitals has also been affected.

Uttam Gautam, 39, an ambulance technician for a Delhi-based ambulance service company, stated that most of his colleagues have tested positive for COVID-19 and recovered. He narrated that an 18-member team had shifted over 800 patients within north India during the peak of the pandemic.

“It has been a challenging job to transfer and shift the patients with no single person from their family accompanying them during the transit owing to health and safety protocols. During the long interstate transits with the ambulance, our ambulance team wouldn’t be served food at any hotel or restaurant. We were not allowed to enter public toilets. Moreover, even hospital staff would treat us differently and see us as the ‘carriers of the virus’," he commented.

A senior housekeeping and sanitation worker, who works on daily wage in the COVID-19 wing of All India Institute of Medical Sciences (AIIMS), Rishikesh, alleged that many doctors within the hospital who were assigned COVID-19 duties, but they didn't enter the wards for months and forced the sanitation workers, including him, to perform their duties.

He said his entire family had to be in quarantine while his neighbours called him names and mistreated his family members.

The pandemic has disrupted the medical education system as many government and private medical institutions have been converted into COVID-19 hospitals. Reports state that thousands of physicians-in-training across the country were pulled out from their classrooms in early April and deployed on consecutive COVID-19 duties. Towards the end of 2020, many state governments had already mandated MBBS students to report for COVID-19 duty in medical colleges with COVID-19 wards. According to The Wire, students in Gujarat were threatened with debarment from university examinations and were sent show-cause notices under section 188 of the Indian Penal Code and the Disaster Management Act 2005, if they didn’t report to colleges.

With this forced shift from their primary role to learn medicine to performing COVID-19 duties, experts worry that most of the undergraduate doctors during the pandemic won't be specialising in their fields by the time they finish their degrees unless they extend their pursuing degree by a year. The consequences and long-term repercussions of this disruption are being anticipated to be affecting the society in large in the years to come, they say.

"Since medical education requires face to face interaction with the patients, undergraduate students are not able to get that opportunity. This has lead to reduced exposure in specific specialities," shared Dr Anupam Singh Chauhan, a second-year junior resident in the Department of Surgery, AIIMS Jodhpur. While stories about the lack of PPE kits for medical professionals in India are common, medical students at the Subharti University in Meerut claim that the institution had been depriving them of PPEs in order to cut the costs and had not even been giving salaries for months for the same reason.

A student, who wished to be anonymous, stated that though their institution had been sourcing funds from the government for PPE kits, they had been deprived of the same for months, especially when the pandemic was on its peak.

He claimed that they are yet to receive their salaries and are threatened with dire consequences if they approach the media with the issue.