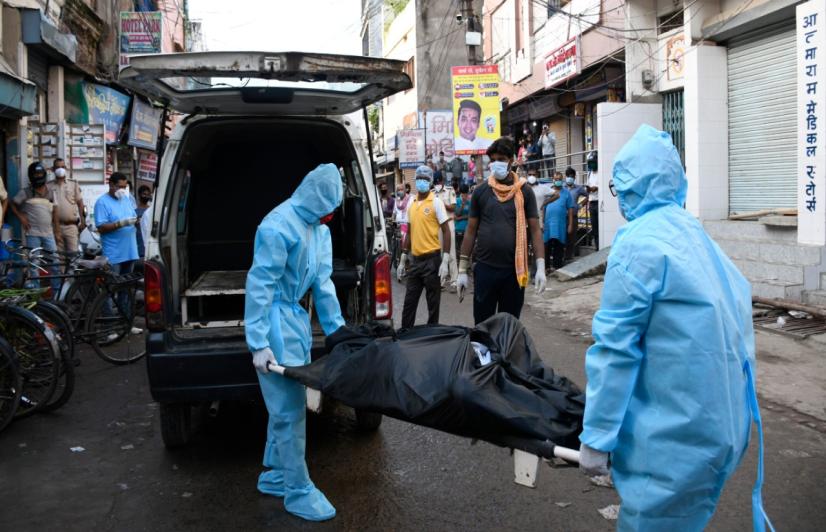 Patna, Bihar: For the cremation of people who died of COVID-19, the handlers and workers at the crematoriums in Bihar are demanding upto Rs 1.5 lakh, media reports say.

On July 14, a bank officer succumbed to COVID-19 at the Jawahar Lal Nehru Medical College and Hospital (JLNMCH) in Bihar. The body was handed over to the family, but they were asked Rs 1.5 lakh at the crematorium to conduct the rites. Even after negotiation, when the operators at the crematorium were not ready for less than Rs 50,000, the family returned the body to the hospital.

Like this, many other cases have been reported from Bihar. Since the lockdown was removed, the state has seen a rise in the number of deaths. Two separate videos of the deceased lying on the hospital bed have gone viral.

Media reports also suggest that there are cases in which the hospital administration handed over the bodies directly to the relatives and a huge amount was demanded from the families for the funeral at the crematorium. According to the guidelines by the Ministry of Health and Family Welfare, the dead body should either be handed over to the relatives or taken to the mortuary.

Kumar Gaurav, the hospital superintendent at JLNMCH, told 101Reporters that there have been many such cases when the relatives of the patients refuse to take the bodies.

“We place the dead body of the patient in a body bag and give it to the relatives for funeral. Our manpower is already very low and so far 55 health workers from this hospital have been infected from COVID-19. In such a situation, we cannot even do the funeral work of dead bodies. It is very difficult for us to perform the last rites of an unclaimed body,” he added.

In the first week of July, bodies of three patients, who had passed away owing to COVID-19, were kept in the hospital as huge amounts of money were demanded for cremation. Finally, after the intervention of Bhagalpur district magistrate, the JLNMCH management negotiated with crematorium operators and agreed to pay Rs 8,000 per body. Of this, Rs 2,000 would be from the state government’s Kabir Funeral Scheme and the remaining Rs 6,000 would be from Rotary Club, a voluntary organisation.

Senior Bhagalpur-based journalist Sanjeev Jha, who had been following the case for Prabhat Khabar (a Hindi daily), stated that in the first week of July, three COVID-19 patients died in JLNMCH Hospital: one from Kharik, one from Bhagalpur town and one from neighbouring district Banka. The family members of the three weren’t available at the funeral because of different reasons.

When the hospital management took them to the crematorium, the handlers demanded Rs 12,000 for each body, with the condition that the body be kept on the funeral pyre by the hospital staff, he added. Later on July 9, the cremation ground operators had an agreement with Rogi Kalyan Samiti and a sum of Rs 8,000 was fixed. Despite this agreement, he said, the hospital management has often handed over the bodies of patients hailing from well-to-do homes to their families. Earlier, the body of a former officer of Bhagalpur University was also handed over to his family members.

After this incident, the banker's wife (who wished not to be named), stated that owing to the non-cooperation of the crematorium operators and local administration, they had to return without conducting a funeral. After the death of the bank officer, several media reports brought out the racket at crematoriums, forcing the district administration to intervene.

On July 15, the Bhagalpur district magistrate wrote to the Bhagalpur municipal commissioner, requesting to immediately start the electric crematorium. He also mentioned the matter of the bank officer’s funeral in that letter.

Similar cases have also been reported in other cities of Bihar including capital Patna. At a crematorium in Patna, there is also a demand of asking for 40 to 50 thousand rupees for funerals. Two videos from Patna’s Nalanda Medical College Hospital (NMCH) have gone viral where the bodies are said to be lying in the ICU for two days and the patient's family claims that other patients too are being kept with them. After the incident came to light, the hospital superintendent was replaced.

An official from the Indira Gandhi Institute of Medical Sciences, Patna, stated that such practices are taking place as the hospitals don’t have enough vans and the management doesn’t want to take responsibility for the funeral expenses.

Speaking to the media, state health minister Mangal Pandey stated that an inquiry into the NMCH incident has been sought, but underlined that the videos are misleading in nature and all protocol was being followed.