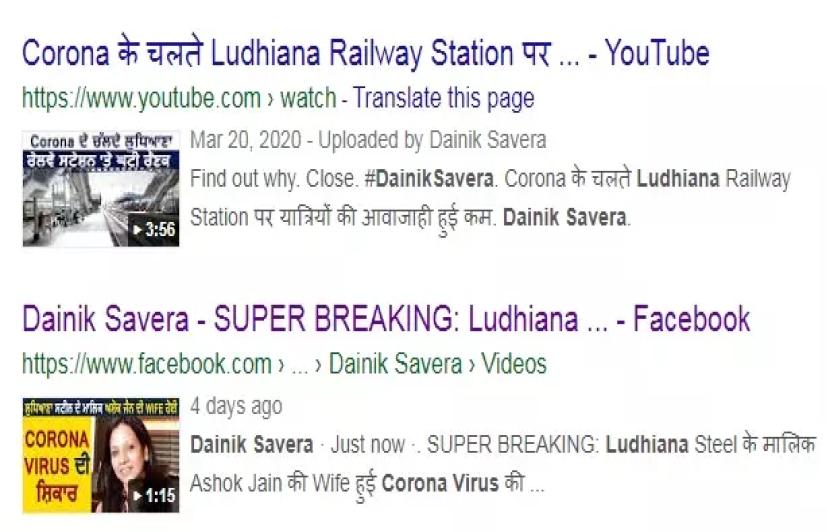 While the world is fighting not only against COVID-19 but also against false news related to the disease, Punjab-based news organisation Dainik Savera is being accused of running a series of false news causing panic among residents and social stigma against the suspects.

While trying to break the news before others, Dainik Savera not only falsely reported on suspected COVID-19 patients but also ended up revealing their identities in videos on its web portal. Out of the three cases that the news organization reported to be COVID-19 patients, only a woman came out to be positive.

Triggering fear, many videos by Dainik Savera went viral in Ludhiana, the industrial city of Punjab. These videos not only mentioned the names of the suspected patients but also their pictures and even the addresses.

This led to shock and confusion among those who were mentioned in the news reports. The suspected patients started getting calls from everywhere — friends, relatives and other acquaintances.

Two among the three people whom Dainik Savera had termed as COVID-19 patients were forced to come out in public and shoot video messages to their friends and relatives ridiculing the news report.

Dainik Savera is a Jalandhar-based newspaper that also has a web portal. Backed by Shital Group of Industries, the newspaper claims to sell 7,31,320 copies every day in Punjab, Himachal Pradesh, Haryana, Chandigarh, Jammu and Kashmir and Delhi-NCR.

Shockingly, the editorial department of the newspaper was not even aware of a fake quote attributed to Italian Prime Minister Giuseppe Conte doing the rounds on social media in which he said “only God can save us” from coronavirus. On March 23, Dainik Savera not only published the fake quote but also did another blunder. The photograph on page 1 of the main edition was that of Brazilian President Jair Bolsonaro in which he is seen crying.

Those who became the victim of fake reporting include - Manjit Singh, owner of Bonn Group and Baljit Singh, an NRI from USA who had come to his home in Ludhiana district. While Manjit and Baljit were neither quarantined nor was there any official report of them having coronavirus, the report of the woman came out to be positive with her pictures and address going viral through Dainik Savera videos. She is at present in quarantine.

Manjit Singh said, “I was surprised to learn about the news story by Dainik Savera that claimed that I am having coronavirus. It is a request that such news organizations that are spreading fake news should be shut down. I am healthy and do not have any health issues”.

Even Baljit Singh recorded a video message and stated that he was having a sore throat after which he himself reported it to the local administration and was taken to the hospital for tests. “I was admitted to the government Ludhiana hospital. At the time when my test was being conducted, fake news went viral that I am suffering from coronavirus. My reports turned out to be negative,” Baljit said.

He said that such unconfirmed news should not be circulated as it could have impacted his social life. “I have also announced from Gurudwara in my village that I am not suffering from coronavirus,” Baljit said.

One such video under the heading “Super Breaking”, said that a woman had developed coronavirus in Punjab. Following complaints against the disclosure of the identity of the patient, Dainik Savera removed the video from its YouTube channel. The link, however, remained on its Facebook page.

Even Ludhiana MLA Kuldeep Singh Vaid came out in support of Manjit Singh and spoke to the owner of Dainik Savera, Shital Vij, regarding the fake news issue. “News claiming that Manjit Singh had contracted coronavirus is completely fake and people should be aware of such organizations that are spoiling the atmosphere of Punjab by circulating fake news,” said the Congress MLA.

Vaid also claimed that Shital Vij apologised to Manjit Singh after the fake news was flagged.

Dainik Savera was quick to run a video in which it claimed that the report of Manjit Singh contracting coronavirus was fake. (https://www.dainiksaveratimes.com/savera-tv-video?id=311d969e7839ca)

As per official figures from the Union government, there are a total of 38 positive cases of COVID-19 in Punjab. Ludhiana so far has one positive case.

All efforts to contact Shital Vij remained futile as he did not respond to calls and text messages.

Chief Medical Officer (CMO) of Ludhiana district Dr Rajesh Bagga said the district administration and health department has appealed to the media not to reveal the identities of coronavirus patients as it leads to social stigma. “Revealing the identities of coronavirus patients is wrong and media should exercise restraint in reporting such cases,” said Dr Bagga.

https://www.youtube.com/watch?v=sAj16lmiaW8 –video revealing details of the woman who has Coronavirus.

https://www.facebook.com/dainiksavera/videos/2847020942079974/ - The video of Coronavirus patient that was deleted by Dainik Savera.