Death of woman during childbirth raises questions on family planning 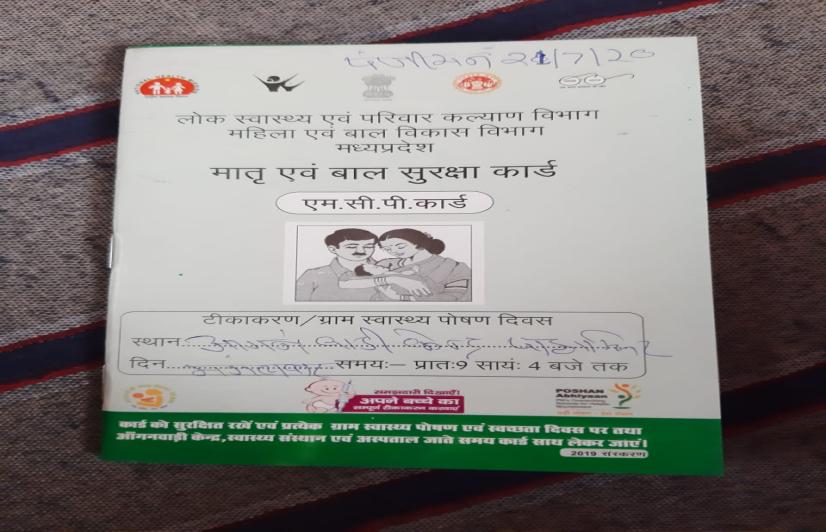 Big negligence of health department in Batiyagarh block of Damoh district of Madhya Pradesh, opens claims of schemes and news of reality

During childbirth, both of them die, the child gave birth to the 16th child at the age of 45

Health act in action after the matter came to light

Anchor - A case has been revealed highlighting all the claims and reality of the Health Department in Pandajhir village of Batiangarh block, located just four km from the headquarters of Hata Civil Hospital in Damoh district of Madhya Pradesh, during the sixteenth delivery of the woman and her  Newborn died, while giving birth to the sixteenth child at the age of 47, this news of the death of a woman, seeing and hearing will blow your senses, see the report--

Birth of a woman Sukhrani Ahirwar, who died during childbirth at the age of 47 in Pandajhir village, also succumbed, the woman was being brought to the civil hospital with the help of an ASHA worker when the condition deteriorated after delivery, but the hospital arrived  already

Both the mother and the child died, the doctors declared both dead in the hospital, then the body of the family woman was brought to the village and cremated.

But the question here is not only about the death of the child, but the most shocking truth was that this was the sixteenth delivery of the deceased Sukhrani Ahirwar at the age of 47, ie before this woman gave birth to fifteen more children, in whom  Eight children died intermittently,

These include prenatal and postnatal children. The remaining eight children are still alive in the family.

The family of this woman coming from the Dalit class, currently has 6 children at home, while two daughters are also married.

After the news of the death of the woman Sukhrani Ahirwar with her child during the sixteenth delivery, when the health department came into action, the nurse and supervisor posted here was suspended in a hurry

Health department officials have argued in the entire case that Matrak Sukharani was at Ahirwar High Risk and due to continuous delivery her condition deteriorated and the woman died due to lack of blood.

The names of the children of Dulla Ahirwar, a resident of Pandajhir village, are also recorded in the school and Anganwadi records, which have been confirmed by the employees of this place itself, despite this, after such a long interval, the responsible officials did not contact this Dalit family and took any measures for population control.  And the woman lost her life on the sixteenth delivery

Even if a Dalit woman dies including a child, all the arguments of the Health Department are to be accepted but the big question is that the Health Department is responsible for giving birth to 16 children one after the other in the long term of about 20 years.  Why did the officials not consider it appropriate to meet this family and get the prohibition done, why not tell the woman and her family about family planning measures, from Batiagarh to Hata and the top officials sitting in Damoh district headquarters were unaware of the data, while the incident  Later, information about this woman and family has been sent to the department from time to time by the employees of the lower class who came in the process.  Seeing the death of Dalit woman during delivery, the district collector, all the health department officials are talking about suspending the lower level employees, but the woman is ruled till the sixteenth delivery one after the other.  Failure to do family planning at the level exposed a major negligence of the department, which had to pay the life of a Dalit woman to life, the rest of the woman's family is now facing the rule of life for living.

- Damayanti Bai Athya Anganwadi worker (in sari dress) --- Woman's child's birth rate increased from 1997-1995, since it was getting pregnant, we have kept all records, some of their children have also been malnourished, which we  Admitted to NRC center, because delivery was being done again and again, since 2017 the record is with another Anganwadi worker, we have our senior from time to time

Informed the officials, at the time of vaccination by the health department also told that you are weak, eat iron folic acid without it. If you have children, then it will be a problem, the woman also has twins, whose malnutrition I informed my senior office  I have information of up to 14 of their children.

-Sudhir Namdev Teacher - (Sitting in Blue Shirt) - Five children of Dhulla Ahirwar are lodged in the institution in the secondary school, Pandajhir, even after repeated calls, they did not get the sterilization operation done, by us and also by the doctors.  They were asked to get the operation done on time that they would face problems even then they did not agree

Husband of Dhulla Ahirwar Matrak woman (behind white lines in white shirt) - My family's stomach was in pain, 108 number was taken from Anganwadi, then 30-40 minutes bid came, then the doctor refused.  He said that nothing left now means he has lost his life.

Sukhrani's husband Dhulla Ahirwar age around 48 years, who died at home on the 10th, she died at the same time, it was her sixteenth delivery, she did not explain much to her family nor did any operation or investigation, her husband was very  The sarpanch was obstinate and did not get the prohibition done even after explaining the health department, the woman became weak due to sixteenth delivery, due to lack of blood, she died due to her injury.

As an action, action has been taken on ANM, we can understand but people do not understand what they can do.

See this news has come to the notice that a woman has died during the delivery, in such a situation, we have given notice to the ASHA worker taking immediate action and suspended the Supervisor and ANM, ordering the BMO to investigate  We have given the inquiry till tomorrow

The family planning schemes could not be reached by that family, investigations are going on at all the points.