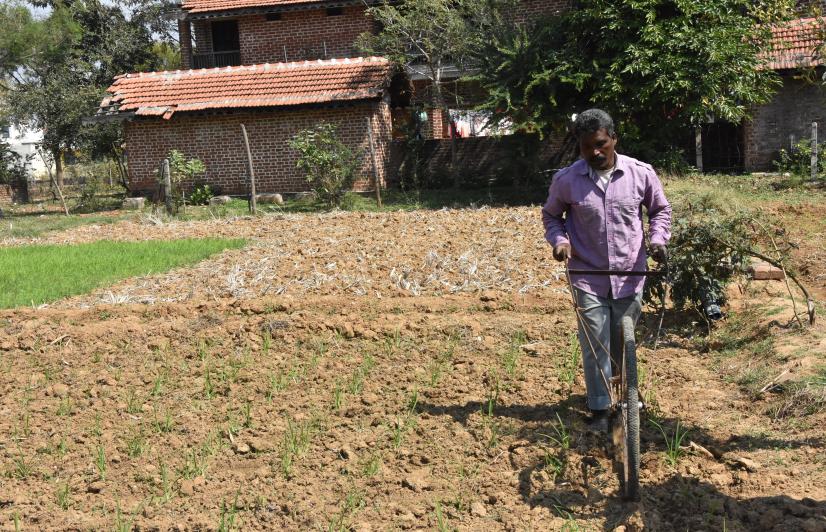 The seventh-largest producer of rice in the country, Chhattisgarh has optimum weather conditions and soil for growing rice. However, the farmers have been sowing the paddy crop during the dry season (February-May), leading to a shortage of water as rice is a water-consuming crop.

While the paddy crop grown in the usual monsoon season has been able to generate surplus yield in the recent years, the farmers growing paddy as a rabi crop has alerted the experts and even the government on the impact it can have on the water table. In 2018, the state produced 10.5 million tonnes of paddy crop. With an average annual rainfall of around 1,207 mm, the net sown area of the state is 47.75 lakh hectares, which is 34% of its total geographical area, rice is grown on 68.8% of the total agricultural land in the state, according to a study by Jawaharlal Nehru Krishi Vishvavidyalay, Jabalpur.

Dr Sanket Thakur, a Raipur-based independent agricultural scientist and researcher, told Mongabay-India that there are four types of soil in the state and traditionally, farmers grow crops according to the soil type and irrigation facilities available. He mentioned that while there are perfect conditions in the state from growing paddy, it is only for kharif (monsoon season) paddy.

“The farmers in Chhattisgarh used to practice crop cycle and in summer, oilseed, millets and pulses used to be the favourite crops for farmers. Summer paddy is certainly a new trend and it is worsening the water crisis in the state," he commented.

He highlighted that farmers are attracted by the initial good yield for summer paddy, but it destroys the agricultural field in the long run.

Experts believe that schemes like Saur Suajala Yojana, where farmers get solar-powered pumps at subsidised rates promote water wastage. The government had distributed around 12,000 solar pumps under this scheme.

Omprakash Sahu, an agricultural expert based in Ganiyari, Bilaspur district, mentioned that there are many farmers who never switch off the solar pumps as they feel there is no cost involved in the process, but they aren’t aware of the cost of water. While the state government launched schemes to reduce electricity usage, it has led to water wastage, he added.

Dr Gopi Krishna Das, an agricultural scientist with the Indira Gandhi Agricultural University, Raipur, stated that despite the discouragement from government, farmers grow summer crop as there is higher yield. He mentioned that his research has shown that the yield of summer paddy is 25% higher than kharif paddy. He attributes the higher yield to decrease in pests and proper weather conditions.

He highlighted that irregular spells of rainfall in recent years has impacted the yield. While some had to deal with a shortage of water to irrigate and had to rely on artificial measures, farmers in other districts faced the loss of crop owing to heavy rainfall.

The control that one has while growing the summer paddy could be a major reason why farmers are attracted to it, he commented.

The state is covered by four major water-systems of India, Ganga, Mahanadi, Narmada and Godavari, with Mahanadi and Godavari covering 85% of the total basin area, according to data from the water resource department. According to the tank gauge report of 44 reservoirs of state, on June 7, 2019, only 31.68% of water against full capacity was available in reservoirs, while it was 37.95% on the same date in 2018. However, proper rainfall in 2019 increased the water level, and the water level of reservoirs stood at 58.15% on June 7, 2020.

In 2017, the Chhattisgarh government launched a campaign to discourage farmers from sowing summer paddy. The department of irrigation had launched an extensive campaign to promote oilseeds and pulse crops instead of summer paddy during the rabi season. The government had also issued a circular to all the divisional commissioners and district collectors asking the same. The state was hit by water crisis with over 62% of its tehsils declared drought-hit. The state government had declared 96 tehsils of the 149 in the state's 21 districts as drought-hit that year.

Ragi as an alternative

Apart from oilseeds, the state government is promoting millets as an alternative to summer paddy. The government has initiated a pilot project in Balrampur district where women farmers cultivate ragi in a 40-acre land. There isn’t a big market for ragi in the state and farmers rely on government support for its procurement.

RK Chandravanshi, joint director of agriculture department of Chhattisgarh, told Mongabay-India that 188 acres of land was provided by the state government and additional support in ploughing equipment, seeds and organic fertilisers were also provided. The land was provided to 19 women self-help group in Vijaynagar area of Balrampur district.

Over 177 quintals (1 quintal=100 kilogramme) of ragi was procured by the state government at Rs 40 per kilogramme, while the market rate is Rs 30-35 per kilogramme, informed Ajay Anant, deputy director of agriculture department for Balrampur district. He added that the government would use this ragi as seed for next season.

Agricultural expert Omprakash stated that ragi is a good alternative for rice as it consumes 75% less water than rice and it’s also more nutritious. Through his non-profit organisation Jan Swasthya Sahyog, he has preserved around 10 varieties of the ragi crop and is helping local farmers of in preparing the field and growing all varieties in their fields.

Doodhnath Bhai, a farmer from Ganiyari village, stated that he has been cultivating ragi for the four years, and claims it’s a great alternative for summer paddy as it doesn’t consume much water.

Krishna Kaushik, a Bilaspur-based farmer, cultivated ragi in his 16-acre land in Beltukri village of the district. He stated that he used to grow summer paddy each year, but this year, he cultivated ragi and got good results. He mentioned that though there is no market for ragi, he is storing it for his personal consumption.

Deepak Sahu, a farmer who cultivated summer paddy in Karhi Kachhar village of Bilaspur district, tried growing ragi after the area was hit by drought in 2017. He used the System of Rice Intensification (SRI), which is usually used for rice cultivation, but with the help of experts, he used it on ragi and has been getting a good yield.