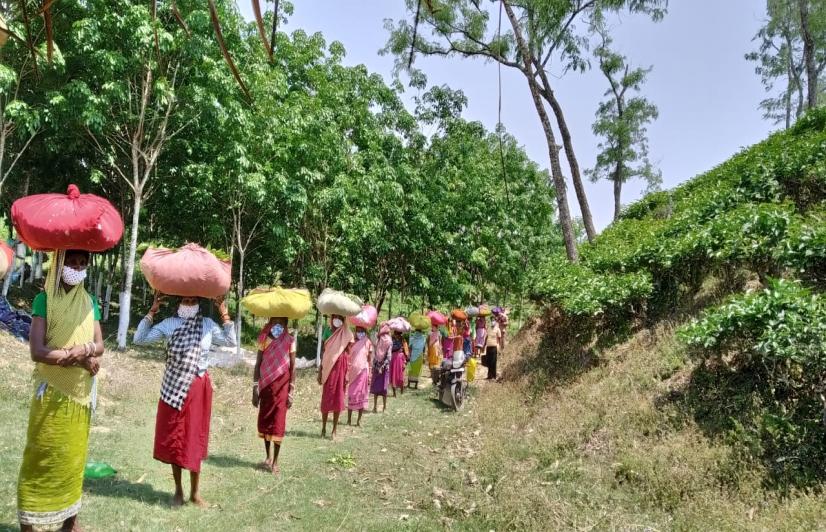 Jorhat, Assam: Since Prime Minister Narendra Modi announced the lockdown on March 24 to prevent the spread of coronavirus, Assam's tea industry is under crisis as tea plants are overgrown and factories are shut while there is a shortage of labour.

Over 104 tea gardens across the three districts of this southern Assam valley are closed and both the Tea Association of India (TAI) and the Indian Tea Association (ITA), the bodies of the planters, are hoping for some relief packages from the government to get past the crisis.

The ongoing lockdown has affected the labour force employed in the tea gardens, as well as the small tea growers in the state. Many growers are in dismay as they missed the prime season for picking leaves owing to the lockdown, while others complain of increasing prices of pesticides and fertilisers amid the uncertainty over the labour force.

"It is the worst start of the season, I lost around 20 quintals of tea leaves owing to this lockdown as no factory was open,” said Bhaben Borah, 47, a small tea grower from Borbam village in Jorhat district.

“Usually, we start our plucking from the mid of March itself. As lockdown stopped all activity for a month, we could not start our first plucking on time. So, when the government allowed reopening of tea activity on April 11, we saw in our gardens that there is hardly any crop as tea plants have overgrown and we had to engage in skiffing (removal of overgrown tea leaves) which we had already done in December,” Bhaben added.

With the lockdown in place, the crops are usually overgrown by mid-April, ensuring loss of usual output, experts say.

In Borbam village, where around 300 such small tea growers reside, the farmers expressed their grief for losing a month’s produce.

“When the lockdown was announced for 21 days, we got engaged in skiffing thinking we could start plucking after the lockdown is over. However, when the lockdown extended, we had to skiff the plants again. Moreover, many plants were also affected by Helopeltis (a mosquito bug) as we could not buy medicine due to the lockdown. So, we have lost two precious months of our plucking which means a loss of around 10-15 quintals of leaves for a small tea grower,” said Rajib Saikia, an award-winning tea farmer from the region.

Skiffing in tea farming is done to have an early high-quality crop. The process helps in removing the knotted and congested stems, thickening the branches and improving the general health of the bushes. There are mainly three types of skiffing which the farmers resort to Medium Skiff (MS), Deep Skiff (DS) and Unprune. Unpruned plants have seen massive loss during the lockdown, according to local farmers. Tea bushes plucked continuously without any skiff (untouched) is designated as Unpruned.

“While the plucking season for MS and DS plants starts late in April and July respectively, the Unpruned plants grow rapidly and it needs to be plucked early. This time due to the lockdown, there was no labour for plucking and factories too are closed. So, all these tea leaves were skiffed and wasted,” said Arun Sharma who claimed a loss of around 15 quintals of leaves from his 7 bighas (1 hectare=6.228 bighas) of Unpruned tea plantation.

According to farmers, the increasing price of pesticide/fertiliser and uncertainty over the labour force is adding to their woes.

Shortage of labour is another cause of worry for small tea growers as they mostly depend on the labourers of neighbouring tea gardens.

“The prices of pesticides/fertilisers have doubled since the tea activity has begun after the lockdown. For example, a bag of urea which costs originally around Rs 260, is now being sold at Rs 400 or beyond. This arbitrary pricing of pesticide is only adding to our cost whereas the price of per kg tea leaves has been the same for years,” said Raghu Gowala, vice president of All Assam Small Tea Growers Associations’ Chungi local committee.

At present, the farmers are getting Rs 18-22 per kg for green tea-leaves, much below the minimum price set by the Tea Board, shared Rajen Borah, president of All Assam Small Tea Growers Association, said that while Tea Board has set a price sharing formula which is recalculated every month, most of the bought leaf factories don’t adhere to that price.

“According to the Tea Marketing Control Order, the price share for small tea growers (STG) is decided on the basis of the price realized by the Bought Leaf Factories (BLF) from recognized Tea Auction centres for their output. Of that price, 65% of the final realization amount is for STGs leaving the rest for BLF’s. But factories don’t follow this. This is again combined with agents, who basically work as an intermediary between the growers and factory, cut their share of money from the growers. So, the small tea growers are left with the bare minimum,” Borah added.

These intermediary agents, according to Borah, push the growers into crisis as many growers take money in advance from these agents as an agreement to sell their leaves to the agents.

“The growers use that money as an investment on their cultivation. But in turn, they lose their bargaining capacity and are made to accept whatever rate the agents are willing to give. Thus, they get trapped into a vicious cycle of debt,” Borah said.

This also highlights the precarious condition of STGs who could not avail any loans for their tea cultivation. “Tea is counted as an industry. So, we don’t get agricultural loans. But we, the small growers don’t have our factory or any such setup to call our cultivation an industry. Adding to our woes, most of our lands don’t have patta. So, our situation is like neither we have a home nor we belong to the world,” he sighed.

Industry sources said Cachar tea, from the Barak Valley, has been suffering from recession over past years. “In 2019, India made record production of tea, but it couldn’t bring a smile on the face of tea planters due to substantial increase in the cost of production, whereas, the price realization remains stable for the last five years,” said TAI Barak Valley branch chairman SK Taparia at a public meeting.

He added that most of the tea manufacturers of Barak Valley are even forced to sell their manufactured tea at a price below the cost of production. Accumulation of losses over the years has pushed the tea gardens of the Valley towards financial insolvency.

The number of tea gardens of the Valley has compelled them to seize their operation in the year 2019 and many others have also failed to clear the statutory liabilities, said Taparia.

(Authors are freelance writers and members of 101Reporters.com)