Pine trees in Uttarakhand leading to desertification of the region, experts say 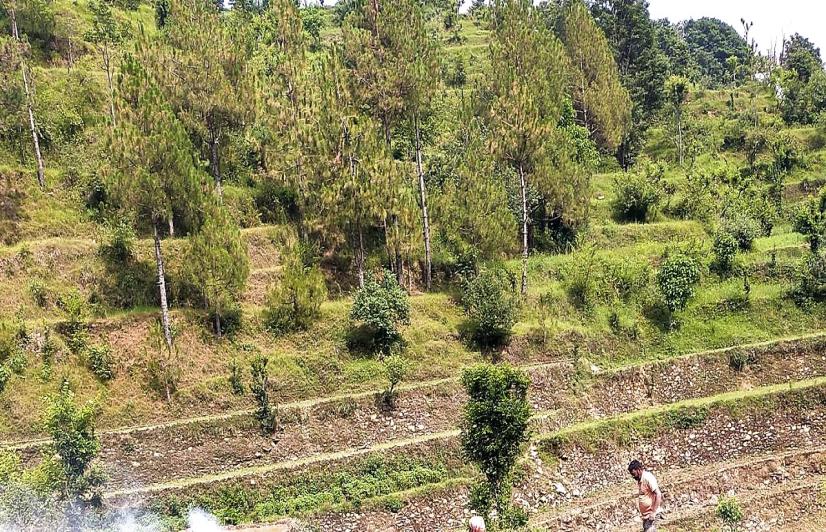 Dehradun, Uttarakhand: Though the felling of pine trees was what had started the initial Chipko movement in Uttarakhand in the 20th century, the residents of the hilly state now see pine trees as a threat. They say pine trees are encroaching upon the oak-rhododendron (known as buransh locally) and other mixed forests in Uttarakhand and are affecting land fertility and water availability.

The biodiversity of the entire region is being impacted by the mismanagement of pine forests, experts say.

SP Nautiyal, who recently retired as an official with the state tax department, wanted to cultivate his land in Sema village, which is part of the Semandidhar belt in Jakhnidhar block of Tehri. He stated that he wanted to plant lemongrass and rose, but he found over 200 pine trees taking up space.

He mentioned that the area was surveyed by the Centre for Aromatic Plants, a state government body, but it was found that lemongrass can’t be grown as there is a fear of forest fires owing to the huge number of pine trees around.

Nautiyal stated that he has written to the state forest department and even several village heads, but hasn’t been able to find a solution.

Vikas Rawat, sarpanch of Salan village in Pokhara block of Pauri Garhwal district, stated that the use of pine wood, like in house construction, has reduced, as people mostly construct pucca houses now.

Dr RF Rawat, a scientist at the Department of Biodiversity and Climate Change, Forest Research Institute (FRI), Dehradun, told 101Reporters that pine trees growing on dry land are expanding and are now spreading towards the other forests.

The chemical found in pine trees’ spiked leaves doesn’t allow any other plant species to thrive under it and thus, its spread is harmful to biodiversity, he explained.

Prof JS Rawat, director of the Center of Excellence for Natural Resource Data Management System at Kumaun University, told 101Reporters that there is rapid desertification of Himalayas owing to declining groundwater levels.

Wide-leafed trees, like oak, store up to 40% of the rainwater they received, while trees with pointy leaves, like pine, can only carry 8%-16% of the received rainfall, he explained.

He added that when the leaves and branches fall from the trees, they decompose with the soil and help in conserving the moisture in the ground but pine trees don’t shed leaves as much or don't even contribute to the moisture retention in soil.

In 1980, the Supreme Court banned the cutting of pine trees situated 1,000 metres above sea level. However, to get a better understanding of the problems caused by the rise of pine trees, the Uttarakhand forest department, in collaboration with the FRI, prepared a report to find out how the ban had affected the forests.

On the basis of the report, the state forest department had a meeting with the Ministry of Environment, Forest and Climate Change (MoEFCC) on June 9, and it was proposed to lift the ban on tree felling. However, the Centre rejected this proposal. The state forest minister has said that they would reach out to the MoEFCC once they receive final clearance from the Supreme Court.

The study by the FRI added that people living around pine forests have to suffer twice as much water shortage as compared with people who live around mixed forests.

Kirit Kumar, senior scientist engineer, GB Pant Institute of Himalayan Environment and Development, Almora, stated that wherever pine trees grow, there is soil loss. He mentioned that since pine leaves are acidic, even grass, vines or shrubs also don’t grow in pine forests.

“Where there is pine, there is only pine,” he commented.