Mute victims of heatwave: Animals dying of starvation in MP 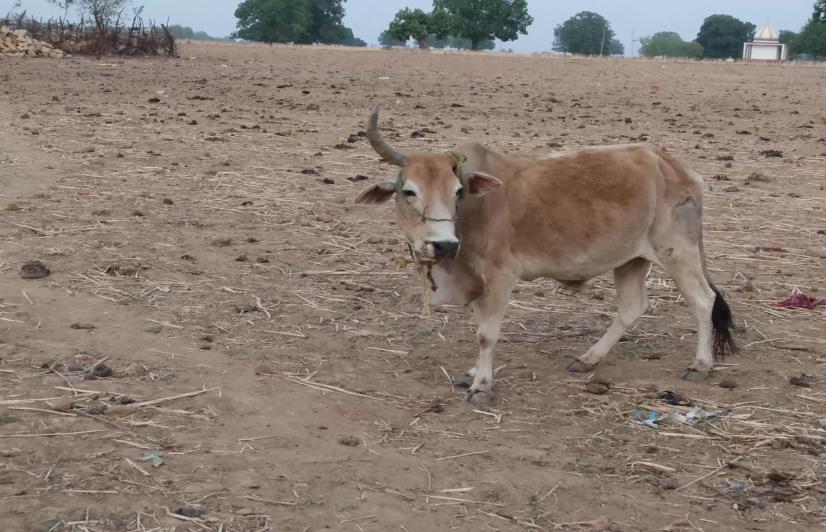 Satna, Madhya Pradesh: Shripal Mawasi, a resident of Putrichuwa village in Madhya Pradesh’s Satna district, has to help his cow stand up. The cow is not sick, she’s famished; a bit too weak to even stand on its own. Putrichuwa has been facing a massive water crisis and thus Shripal couldn’t arrange enough water for his cow.

“I had bought this cow four years ago for Rs1,000. She gave birth to two calves during this period but this year proved to be bad for her. Due to the water and food crisis, I failed to feed her. When water is not available for humans itself, how can we provide it to animals!” asked a dejected Shripal.

This is the situation in almost every household in this village. Abandoned cows at roadsides and in deserted fields are a common sight in the region. Rameshwar Mawasi, a resident of Barha Mawan village of Satna, said the residents of the village had predicted a drought in March and sold off their big cattle. He informed that now villagers have only goats for cattle as people have abandoned their cows and buffaloes owing to the shortage of food and water.

Even during monsoons, there is no end to this problem. According to the statistics released by the Indian Metrological Department, the state has received 56% less rainfall between June 1 and June 26 compared with the same period last year. The average rainfall should have been 91.4 mm during this period but the state received only 45.1 mm water.

The lack of rainfall has created a famine-like situation in the region. Bhurelal Mawasj, a resident of Putrichuwa village, said he regrets buying a cow. He highlighted that if the rains are delayed by another two weeks, everyone will lose their cattle.

Not only animals, even humans are facing great difficulty because of scarcity of food and water. Women walk nearly four kilometres to fetch drinking water. Fourty-year old Phool Bai, a resident of Putrichuwa, informed that seven hand pumps in the village have dried up and the women go to a nearby pond and a well to fetch water.

The severity of the water crisis is similar in the nearby villages of Majhgawan block.

“There is a lone functional hand pump in the village and that too gives dirty water. One has to keep pumping it for 15 minutes to fill a 20-litre bucket,” rued Rajaram Mawasi, a 55-year-old resident of Kiraipukhari village.

He added that while the villagers use water from the hand-pump only for drinking purpose, water for animals and other household work is obtained from a pond three kilometres away from the village. An average resident of the village walks 15 to 16 kilometres to fetch water twice or thrice every day, he said.

Satendra Singh, the district collector of Panna, was not available to comment on the scarcity of water and the steps the government has taken to address this shortage.