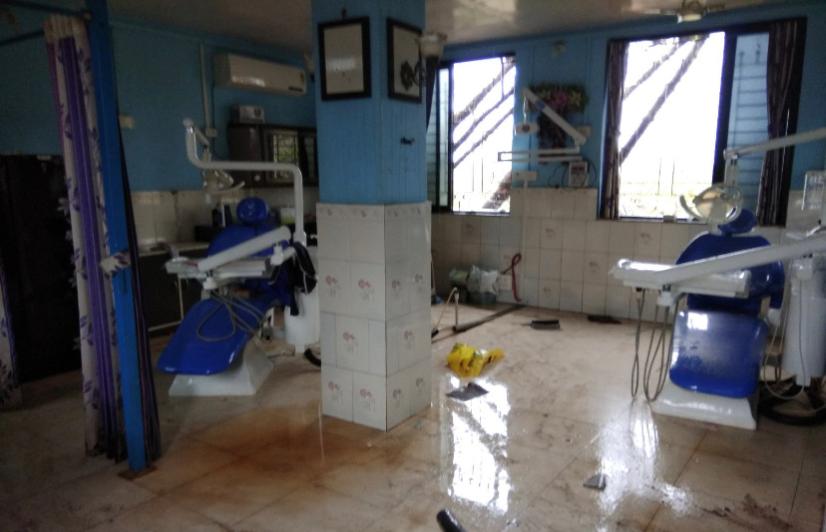 Konkan, Maharshtra: On June 3, Cyclone Nisarg made landfall in the coastal parts of Maharashtra, leaving many people affected. Though over three months have passed, the residents along the Konkan coast have been struggling to get back to normalcy and are dependent on non-governmental organisations (NGO) for their survival.

The lockdown to contain COVID-19 affected the livelihood of the resident at first, but as the lockdown was being eased, the cyclone put a damper on their efforts. The people living there claim that the state government hasn’t extended much help and even the poor beneficiaries of government programmes had to visit government offices multiple times to get any sort of assistance.

People in the region state that they have no money to rebuild their houses and are dependent on NGOs from Mumbai and Pune for their survival as most of them don’t even have enough money to buy groceries.

Dr Nikhil Saigaonkar, a dentist who lives in Galsure village in Raigad district, stated that his dental clinic is the only clinic between Shriwardhan and Hari Hareshwar, and people from 40 kilometres away would come to him, but his entire clinic has been destroyed by the cyclone. He mentioned that he has had to incur a loss of about Rs 14 lakh and even though he has written to the state government asking for help, he has received no assistance.

A Raigad resident Datta Indurikar, who sells coconuts for a living, stated that the lockdown disrupted his business, while the cyclone destroyed his house and trees. He added that he had to move with his daughter in Kolhapur for two months as there was no power supply in his area for two months.

Samadhan Naste, a resident of Umbarvira village, located near the Mumbai-Pune Expressway, stated that his makeshift home was destroyed by the pandemic and now he lives with five other people in a small establishment.

“We survived on whatever was provided by the NGOs, but realised that it can’t go on forever and thought of starting a new life. Everything in the village has been destroyed, the schools, houses and shops,” he said.

Community to the rescue

With the help of a few volunteers, Anish Pardeshi, a Pune-based environmentalist, has organised fundraisers to raise money for the basic needs of the affected. He mentioned that blankets, food packets and mosquito repellents have been arranged for around 500 people in the first phase and he plans on doing more.

“The situation is bad, most people have no jobs and means of livelihood have been affected due to COVID-19,” he added.

A Pune resident Jayesh Paranjpe, who has a travel company, has helped raise Rs 1.3 lakh to support the affected people residing in Velas village, Ratnagiri district. He mentioned that they had first set a target of Rs 50,000 to help about 40 families in the village, but as the target was achieved well before its time, he started a crowdfunding campaign, from which he collected Rs 1.3 lakh in donations.

He stated that apart from the affected people, they also want to help in clearing the fallen trees.“Most of the destruction in the village was caused by the fallen trees. Hundreds of arecanut, coconut, mango and cashew trees fell and clearing these had been an uphill task for the families and the authorities. So after consulting the gram panchayat, we also decided to donate a wood cutting chainsaw to the village,” he added.

Kavita Patil, sarpanch of Umbarvira village, told 101Reporters that they tried fixing the roofs of houses of the residents, but they don’t have enough funds to carry out all the work and are waiting for the release of funds from the authorities.

Nidhi Chaudhary, the district collector of Raigad, stated that they are sending people to carry out repairs and are also providing groceries to the affected.