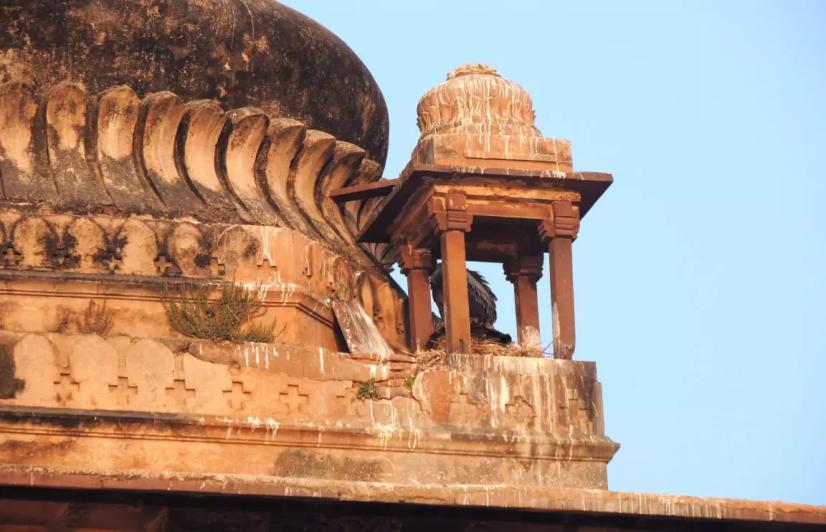 One would think a government will handle a crucial and disappearing species’ breeding site with utmost care. Not the Madhya Pradesh government, though, if vulture experts are to be believed. They say the administration’s ignorance and callousness are harming the threatened bird’s population in more ways than one.

Orchha town in the central state’s Niwari district will host a government-driven, three-day international tourism festival in the first week of March. Orchha is known for 16th-century monuments built by the Bundela Rajput rulers. The dynasty’s founder Rudra Pratap Singh had made Orchha the capital of his kingdom and built many forts and temples. There are more than 50 ancient monuments in the town.

Vultures build their nests on tall trees, cliffs and old monuments and buildings. The historic buildings in Orchha too thus have had many a nest of the bird. Conservationists say the government’s restoration of these sites ahead of Namaste Orchha, which will be held from March 6-8, has damaged vultures’ breeding prospects there.

“We have photographs showing how nests vanished after the cleaning,” said Dr Sonika Kushwaha, who has studied the bird extensively and authored research papers on them.

Conservationists’ grievance with authorities in charge of Namaste Orchha is that they have overlooked the dire need to protect vultures and are causing irreversible damage. Dr Kushwaha cited the audio-visual spectacle that has been planned as a case in point. A research paper of hers titled ‘Unremitting effect of human activities on the surviving vulture population in Bundelkhand region, India’ states that tourism activities in Orchha, such as lighting up the monuments, disturb the breeding pairs. Published in World Journal of Pharmaceutical and Life Sciences in October 2018, the report says parent vultures stay away from the nests at night because of unnecessary lighting.

“It will be almost impossible to bring vultures back to their nests once they leave,” the report’s co-author Dr Akhilesh Kumar told Mongabay India.

Why vultures are important

Vultures eat the flesh of dead animals. A research published in 2008, ‘Counting the costs of Vulture decline – an appraisal of human health and other benefits of Vultures in India’, likened the bird to a natural resource that provides the service of disposing of the bodies of dead animals.

Potentially fatal pathogens breed on dead bodies and can infect human beings directly or indirectly. Tuberculosis, anthrax and malta fever are a few such diseases. If no scavenger consumes the decomposing flesh, house flies and a host of other factors can contaminate the surroundings with these disease-causing bacteria.

Vultures are so efficient at scavenging that they can reduce the carcass of a large animal to clean bones in an hour, greatly reducing the scope of infection-spread. No other scavenger can polish off a dead body. Also, vultures are the only species whose metabolism neutralises these pathogens. Other scavenger species like rats and dogs can become carriers of harmful spores if they consume an infected carcass.

Further, multiple studies have pointed at the correlation between a decline in vulture population and an increase in dog population. (As one scavenger species begins to disappear, the other species has more food available and thus their population tends to grow.) The aforesaid study states that according to a conservative estimate, the number of human deaths caused by an increase in the dog population (owing to rabies caused by dog bites) between 1992 and 2006 stood at 48,886.

The Wildlife Protection Act, 1972, mentions vultures in its Schedule I. Species under Schedule I are to be accorded “absolute protection”. Offences against species mentioned in Schedule I attract the highest penalty. The Red List of Threatened Species, a globally recognised resource on biodiversity, categorises the Indian vulture as a critically endangered bird.

No problem at all: Govt

Faiz Ahmed Kidwai, Managing Director of Madhya Pradesh Tourism, which is a stakeholder in Namaste Orchha, told Mongabay India the government was taking “necessary precautions” to avoid disturbing vultures before and during the programme. However, he could not tell what precautions were being taken.

The ranger of Orchha forest range, Anand Shrivastava, was quoted in a news report as saying that the forest department is aware of vultures’ habitat in the region and has asked other departments to safeguard the birds in the run-up to and during the upcoming tourism festival.

In a statement, Deputy director of Archeological Survey of India (ASI) KL Dabhi said, “We have stopped all kinds of work there. Even manual maintenance work, no nest was disturbed. The only reason behind vultures not being in their nests is that they go to forests in the morning and come back in the evening. There is no problem at all.”

Apart from Dr Kushwaha and Dr Kumar, Khan and forest & wildlife activist Ajay Dubey too told Mongabay India that vultures’ nests were destroyed during the cleaning and painting of monuments. While Khan has written to the forest department about this, Dubey has filed a complaint with the Union environment ministry. Khan said that restoration work has caused irreversible harm but there is still scope to avoid further damage. Like Dr Kushwaha, he said fireworks and the light-and-sound show need to be scrapped.

He said he was planning on meeting the forest minister and the authorities concerned to impress upon them the need to protect vultures. Dr Kushwaha wouldn’t expect much to come out of it. For, she has already written to the ASI, the forest department and the environment ministry but got no response.

In fact, she quoted a forest department official as saying that lights and noise don’t disturb vultures. Apparently, the official dismissed these concerns as a myth. Dr Kushwaha lamented the decision-makers’ ignorance and denial. She said she has provided the government with all the information about removal of vultures’ nest for Namaste Orchha but the government still refuses to accept it.

“The government is spending crores of rupees for vulture conservation but on the other hand, there is no protection of their natural habitats,” Khan said, lamenting how the authorities have allegedly disregarded vultures in the preparation of Namaste Orchha.

The curse of commercialisation

Conservationists are also peeved at the brazen use of drones at vultures’ breeding sites. The promotional video for Namaste Orchha itself has many visuals shot from drones. Dr Kushwaha and Dr Kumar’s study ‘Unremitting effect of human activities…’ states that drones cause considerable and unnecessary disturbance and stress in the breeding vultures pairs.

Bird expert Khan said conservationists, ASI and forest department officials have had discussions about safeguarding vultures from all this razzmatazz but nothing came out of it. He said it was concluded that no shooting will be allowed during the birds’ breeding period but the ASI fails to ensure that. He said the ASI often ends up giving permission for wedding videos or commercial ones during the times the birds ought to be left alone.

He said vultures had been nesting in the Chaturbhuj temple but had now lost their nests and chicks to the government’s restoration work.

Experts recommend taking up maintenance when vultures are not breeding, from May to September. However, the Madhya Pradesh administration began work on Orchha monuments after Chief Secretary SR Mohanty directed the state machinery in November to restore important tourist places.

This beautification drive, taken up at the cost of Rs1.5 crore, clashes with the birds’ breeding period. Dr Kushwaha cited the use of heavy machinery near vulture nests and said the bird may leave its nest because of human interference. She said currently only two monuments in Orchha have vulture nests against nine in 2009.

A petition on Change.org to save vultures of Orchha, started by Indian Biodiversity Conservation Society (IBCS), says the birds’ visits to their nests decline because of human interference, which leaves chicks malnourished and uncared in cold weather.

According to an IBCS survey, Orchha had 35 vultures in nine monuments in 2010-11 but by 2019-20, only 11 vultures were left. “There are no vultures left in Laxmi temple, Raja Ram Mandir, Phool Bagshish Mahal, Jahangir Mahal, Topachi ki Hawaeli, Ramnagar, Suparisaw ka Mahal, where at least two vultures resided 10 years ago. Now, only two places—Chaturbhuj Mandir and Chatris—have the vulture population,” the survey said. (The official figures of the MP government vary. They say Orchha and nearby forests had 87 vultures in 2019 and that their number was about 60 two years ago. Also, the government numbers say the vulture population in MP has increased by 864 between January 2019 and 2016.)

Another study, ‘Bundelkhand Region: A promising breeding area for vultures’, stated that vultures are shy birds and their behaviour gets altered when humans are present within 300 metres of them. “The frequent presence of people in the breeding areas alters the behaviour of adults, mainly during the second half of the nestling period,” said the report, published in Journal of Entomology and Zoology Studies in April 2017.

The research report of Dr Kushwaha and Dr Kumar contends that tourism is problematic for the bird’s breeding site. In fact, it alleged that some tourists pelt stones at the nests for fun and that volunteers have rescued several birds that were injured by stones hurled by tourists.

The decline in population

Union environment minister Prakash Javadekar had told Parliament in July 2019 that while India had about four crore vultures of three species in early-1980s, their number had plummeted to 19,000 by 2015. The three species are: white-backed, long-billed and slender-billed.

In the written reply in Lok Sabha, the minister stated that the crash in population was first noticed in the mid-90s. By 2007, there was a 99% decline in the population of the critically endangered resident Gyps vultures. Categorised as old-world vultures, they are slow breeders and lay only one egg a year.

The biggest cause of the fall in vulture population is the practice of administering a common drug, diclofenac, to cattle. It is a cheap drug that is used to relieve cattle of pain, fever and inflammation. When a sick animal dies within a week of being given diclofenac, it remains in their system. When vultures consume the carcass of such animals, the drug enters their system. Unlike mammals, birds metabolise the drug differently. Even a small quantity of it is toxic for them. It ends up causing kidney failure in them and kills them within a month.

A single carcass contaminated with diclofenac can kill anywhere 350-800 vultures.

Diclofenac was banned for veterinary use in India in March 2006. However, conservationists allege that many cattle owners give diclofenac meant for human use to their animals; carcasses of such cattle continue to be a threat to the vulture population.

The government of India has formed a National Action Plan on Vulture Conservation. It has recommended strategies to check the downfall in vulture population. It has requested all the states and Union Territories to set up a monitoring committee to implement the plan.

Bird experts are accusing the Madhya Pradesh government of apathy at a time when India hosted the 13th Conference of the Parties to the Convention on the Conservation of Migratory Species of Wild Animals. The high-stakes programme was held in Gujarat from February 15 to 22.

According to the study ‘Unremitting effect of human activities…’, authorities concerned need to take urgent action and coordinate among them to ensure vultures are not disturbed during their breeding season. The report said there ought to be a continuous monitoring of these efforts to ensure compliance.

Many countries where vulture population has declined have started vulture restaurants, another name for vulture feeding sites or vulture safe zones. Here, drug-free carcasses are put out for vultures to feed on. In a story last year, Mongabay had described how the number of vulture nests in Nepal’s Pithauli town on the outskirts of Chitwan National Park had increased after Bird Conservation Nepal started buying old cattle from their owners, take care of them until they were alive and then put out their carcass for vultures after their natural death.