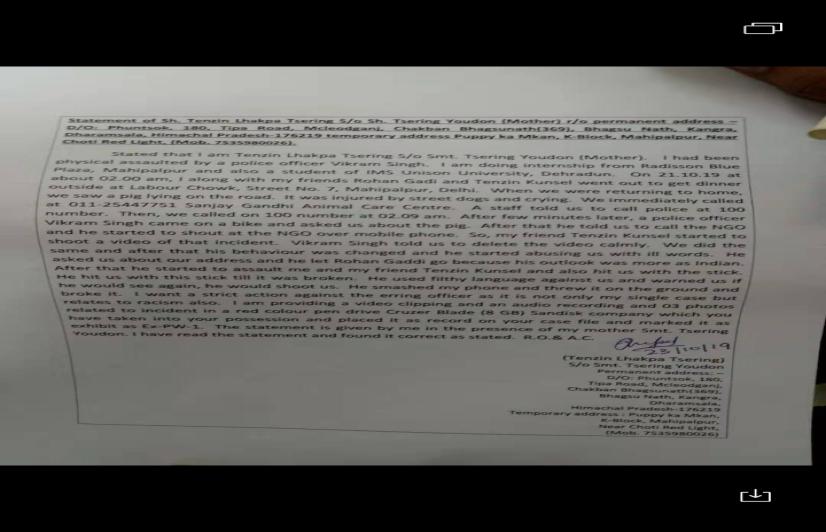 Three college students in India’s national capital of Delhi ran into trouble when they sought to call help for an injured piglet.

The incident happened on the intervening night of October 21 and 22 when the youth, all undergraduate students, were returning to their accommodation after completing their shift at a hotel where they are undergoing internship. They spotted an injured piglet and called up an animal care NGO, which advised them to call police, reasoning that the pig must belong to someone and thus it’s important to keep the police in loop to pre-empt any allegation of stealing the animal.

Tenzin Lhakpa Tsering, one of the students, said a policeman came on a motorcycle and got mad at them for calling police over an injured pig. The students shared a video clip, where the cop Vikram Singh is seen abusing them and badgering them to take the pig home.

“The official who came said people who come from the hilly areas, like me, to Delhi hungry and naked get involved in politics and demand freedom. He was threatening to shoot me,” said Tsering, who studies in the hilly state of Uttarakhand and hails from Tibet.

People with Mongolian features occasionally get mocked at in India for looking different. Tsering said the cop targeted him and his classmate Tenzin Kunsel, a fellow Tibetan, while letting their third friend go because he ‘looked Indian’.

Tsering’s father Kalden Chophel told The Animal Reader that Kunsel was recording this harassment on his phone, at which the cop demanded that he delete the video. Singh then reportedly picked up a stick and beat them hard. Kunsel’s leg is badly bruised and Tsering’s ankle has a minor fracture. The youth were too scared to report this at a police station and didn’t even tell their family till the beating began hurting the next day.

Tsering’s mother rushed to Delhi and his father, an animal activist and co-founder of Tibetan Animal Lovers, called noted animal rights activist Puja Bahukhandi. Bahukhandi highlighted that the two recorded their statements at Delhi’s Vasant Kunj (South) police station on October 23 and even after she spoke to police officials over the phone, they hadn’t registered a First Information Report (FIR).

Tsering said police officials told him that an FIR can be registered only after a doctor confirms the medical report, which came on October 29. However, the police then said the FIR can be filed only after the investigation is completed.

Bahukhandi claimed that the cop’s wife called her to ask for forgiveness. Tsering said the cop himself has been calling him to apologise and requesting a compromise. He added that he is getting support from numerous animal lovers and the police are under pressure.

The cop in question has been suspended. Sanjeev Kumar, Station House Officer of Vasant Kunj (South) police station, stated that investigation regarding the case is underway.