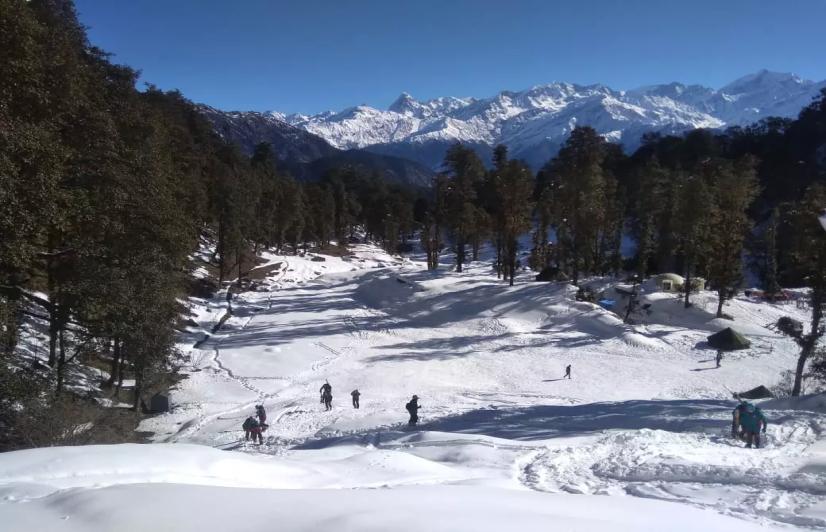 Ample snowfall in the hilly state of Uttarakhand for the second consecutive year has come as a shot in the arm for the region’s deteriorating ecosystem.

The Hindu Kush Himalayas are known as the water tower of Asia. Major rivers such as Indus, Ganges, Yamuna, Brahmaputra and their many tributaries originate from the Himalayan glaciers. Uttarakhand has more than a thousand glaciers, which have been shrinking for decades because of climate change.

A research published in January 2019 noted that warming in the Himalayas can “adversely affect the supply of water to humans and agriculture, especially in the dry season.” This is not a mere theoretical possibility but a reality that has been unfolding in Uttarakhand.

Ahead of summer in 2018, the state water board had acknowledged that over the previous three years, 93 of its 500 water supply projects had seen more than a 90% decrease in water discharge. In the same period, discharge reduced between 75 and 90% in 268 water projects. One hundred thirty-nine water projects saw their water discharge declining between 50 to 75%.

However, plentiful snowfall that the state received in the winters of 2018 and 2019 is slated to check the side-effects of glacial erosion to an extent.

Scientist and glaciologist DP Dobhal said this snowfall will help recharge rivers, natural water sources and underground water table. Dobhal, who works with Wadia Institute of Himalayan Geology (an autonomous research institute under the Department of Science and Technology), noted that while the state had witnessed abundant snowfall in 2004, 2009 and 2014 too, the huge gap between two seasons of healthy snowfall doesn’t help the environment much.

He explained that when snowfall takes place after a big interval, the previous snow melts off from the glaciers but when snowfall occurs frequently, the blanket of snow on the glaciers thickens. He said glaciers recede by five-six metres every year but this time, back-to-back snowfall has improved the snow cover on them and this will alleviate their melting.

He pointed out that it was after 10-15 years that regions at the altitude of 1,000 metres witnessed snowfall.

Director of Uttarakhand Space Application Centre (USAC) Prof MPS Bisht said that Kedarnath temple, which is at the altitude of 3,583 metres, had no snow in February 2018 but this February, there was a snow cover of 9-12 feet around it. He said parts of Kedarnath were under 48 feet of snow after the winter of 2018 and this time around, the snow cover will be even thicker because of heavier snowfall. He said that in the previous years, barring exceptions, Kedarnath would receive only 5-20 feet of snow.

USAC is a government agency that uses space technology to monitor natural resources, glaciers, environment etc and works towards their preservation, among its other functions.

Bisht said the bountiful snowfall over the past two years has come as a big relief to the ecologically sensitive Himalayan belt. To illustrate the severity of the region’s receding snow cover, he cited his experience with the Tipra glacier, which he studied from 2003 to 2012. He said the altitude at which trees grow has been increasing as the hills are losing snow. He said he noticed in 2009-10 that plants had started growing in Tipra glacier’s erstwhile perpetual snow line. He said he noticed in 2012 that five sub-species of the pine tree had started growing in what used to be snow-clad areas. Likewise, he said the Himalayan poplar tree, which used to be found only till the altitude of 2,700 metres, could now be seen at the altitude of 2,900 metres.

Principal of Uttarkashi-based Nehru Institute of Mountaineering, Col. Amit Bisht, informed that a team from the institute that has gone to Dokriani glacier informed him over the phone that there is a heavy blanket of snow over the glacier. He said this is not something that happens often.

Vinod Musan, a resident of Musan Gaon village in Tehri district’s Devprayag block, said his village saw snowfall after 20-25 years. He said the new generation had not seen snowfall in their village at all. He said not only did the village receive snow but it also stayed for an entire week.

Mohan Singh of Sukhi village in Uttarkashi district has apple orchards and he’s grateful for the snowfall, which is instrumental in ensuring a good yield of the fruit, branded as Royal Apples. He explained that these apples need 1,200-1,500 chill hours for good-quality harvest. Also, low temperature reduces the chances of a pest attack.

Seven-eight villages of the region make up Harsil valley, where crops such as apples and rajma (red kidney beans) are the main source of livelihood.

Progressive farmer Bhagchand Ramola of Majhgaon village in Tehri district said snowfall is akin to a boon for the region’s trees, crops and water needs. He said water sources that typically dry up by the advent of summer will have water till May-June. He said the ample snowfall the village received on January 28 has helped improve soil’s moisture content as well as nitrogen content (snow contains small amounts of nitrogen, which gets absorbed in the soil gradually).

While the quantum of snowfall over the last two years has put a smile on many a face, glaciologist Dobhal says there’s not much that one can expect from two good seasons alone. For, he said global warming has been melting glaciers horizontally as well as vertically for three-four decades now.

USAC director Bisht said it will need regular snowfall for 5-10 years to help arrest the adverse effects of climate change. He explained that if even one foot of snow on glaciers lasts till another snowfall season, it is beneficial as regular snowfall converts the blanket of snow into solid ice, which helps slow glaciers' rate of melting.