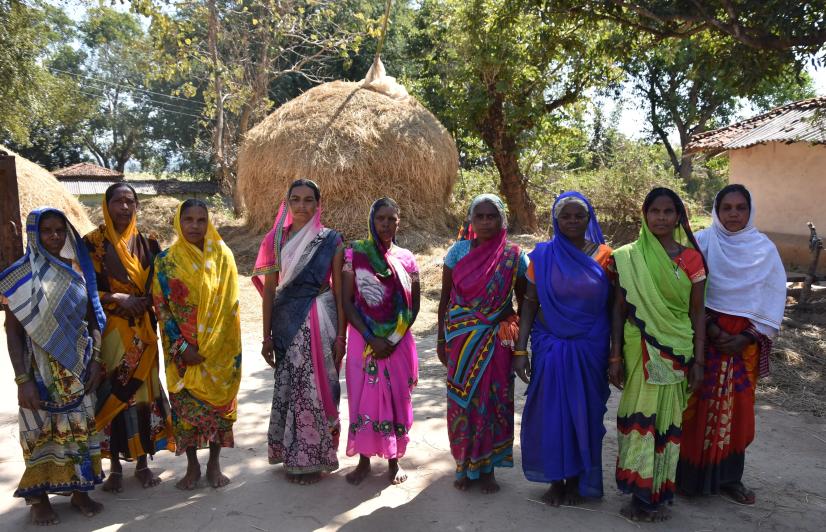 In spite of the ongoing sugarcane harvest, a group of women sit huddled in a circle having a meeting in a small village in Lundra range of Chhattisgarh's Surguja district, about 100 kilometres away from state capital Raipur. At the sarpanch’s house, Dhaneshwari Bai, a resident of the village, has called an urgent meeting after she spotted a few tree stumps in the forest, indicative of recent felling. The women decided to start round-the-clock patrolling of the forest in the light of the recent violation, even though many were occupied with the sugarcane harvest. At Karahi, a village with about 100 households, women carry out patrolling in groups to protect the forest from further damage.

Earlier, the village had a moderate climate throughout the year but recently, extreme weather events such as droughts have started impacting the residents, mentioned Mangho Bai, a resident of the village.

“We are not literate but we have come to know that the weather is affected owing to massive deforestation,” she said.

The villagers depend on the forest for firewood, medicinal herbs and vegetables and fruits. However, some people would cut a huge number of trees, Mangho said, adding that it prompted her and her sisters in arms to start patrolling.

Reminiscing the greenery that prevailed over the village when she had first come after getting married 15 years ago, Basanti Bai said the green cover now stands depleted and bald patches have emerged.

Karahi became famous three years ago when its women started the initiative to tackle damage to the forest. Several other women from nearby villages have also joined this vigilante force. From patrolling inside the forest throughout the day to raiding the house of the accused, these are all part of the daily routine for these women.

Twenty-five years ago, a few women had come together to form Bachat Samooh (a saving collective) to encourage financial saving. Three years ago, they also introduced saving trees under their agenda.

The forest cover of Surguja district happened to be 45.55% of its geographical area in 2009, coming down to 45.02% in 2019. The exploitation has also affected forest produce and many fruits, such as mahua and gooseberry (amla), are only found rarely now, villagers say.

“Earlier we used to collect Shatawar, Kali Musli, Galfuli and many other natural medicines that helped cure many diseases, but these days it is difficult to find such plants in the forest anymore,” stated Shiv Sagar Ram, a resident and local medicinal plants expert, attributing the reason of decline to deforestation.

“Kaanda [a root vegetable] used to be our primary vegetable during summers and could have been found by digging one or two feet, but now the particular species [of the vegetable] has vanished from the forest," he added.

Situated in the northern part of Chhattisgarh, Surguja district is spread over plateaus, highlands, plains and hills with a large portion of the total area covered by forests. The majority of the local inhabitants comprise tribes and migrants from other marginalised groups. The residents use resources from the forest to fulfil their daily requirements such as fuelwood, medicines, timber wood for constructing houses and agricultural equipment.

According to a study published in the International Journal of Science and Research, the present condition of the forest area in Surguja district is extremely poor and many plant species of this region have disappeared while many other species are endangered and rare.

Extraction of timber and non-timber products is not permitted since a quantitative estimation of the extraction is not possible.

At the meetings, a list of threats to the forest is prepared. It was found out that a century-old tradition of constructing mandaps (small tents for worship) during weddings and festivals was the major cause of deforestation. Another threat was from the local woodcutters, who sell wood in the market after cutting down big trees. Villagers also collect wood from the forest but as per the guidelines of the forest department, it is not allowed to cut green trees. However, women found that some villagers were violating that regulation as well.

Sumitra Purte, an active member of Bachat Samooh, mentioned that the first step was creating awareness regarding the importance of forests. They explained the importance of small trees in the forest ecology, and urged them to use old wood for events, she added.

Whenever a family in the village organises a pooja, a villager alerts the group and then these women approach the family to discourage them from cutting trees. However, it was never easy for a women-only group to convince people. To get the desired results, they started raiding houses and confiscated wood.

Bhulsi Bai, sarpanch of the village, told Mongabay-India that they increased the pressure on the residents, while also raising awareness. Her manifesto underlined the importance of the forest and was elected for a second consecutive time.

“We are still struggling to curb the activities of professional woodcutters. Being a woman, there is always a fear of security while going to the forest, so male members of our village also started helping us in this cause. They help us with torches at night while we go for patrolling,” Bhulsi added.

He said, “Sometimes we seize wood but the officials take two to three days to respond. Sometimes we take wood by ourselves to the wood depot of the forest department, but we didn’t receive much support.”

The regular patrol by the women acts as a deterrent for anyone wanting to cut trees in the forest region. Their endeavour has started to show results as small trees are not being felled anymore and the forest's tree density is beginning to improve. The front face of the village is green once again and one can see the dense forest near the road while entering the village.

Though Surguja has lost the total area of forest, the area of very dense forest has increased by twice in the last 10 years. In 2009, it was 320 square kilometres, while the very dense forest cover rose to 706.72 square kilometres in 2019. This shows that though the dense parts are improving, open forest area and moderate forest near the village are facing depletion.

When Mongabay-India tried to get a comment from forest officials on this issue, the conservator of Surguja District, AB Minz stated that he was not aware of the initiative and forest ranger Priyanka Pandey was not available to comment on this issue.

Recognising the efforts of women groups, Nirmala Kirkita, a local activist and resident of a nearby village, stated that earlier, people would use certain tricks, such as cutting the bark of the tree to kill it, but increased awareness among villagers have stopped it.

The group of about 70 women organised in 8-10 groups across seven villages have stayed connected through mobile phones.

Almost every household of the village owns a mobile phone and it is easy to communicate and gather for meetings, she added.