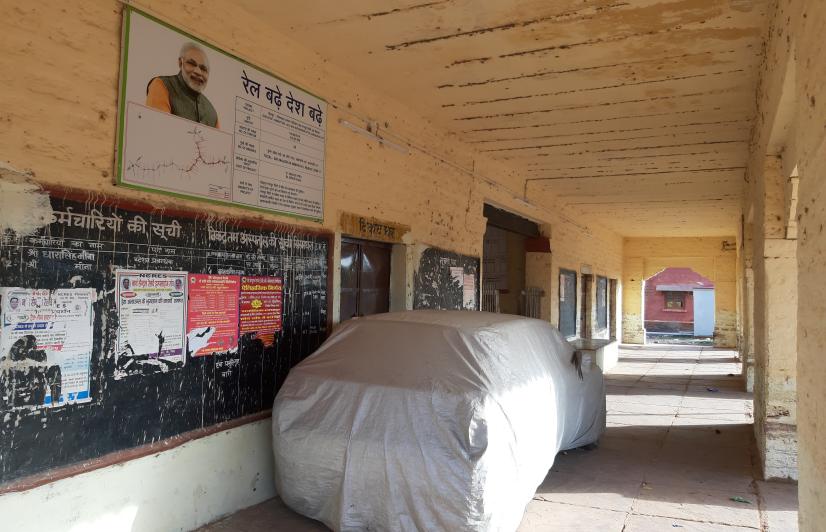 Jaipur: Water, electricity, roads, healthcare, and several other basic needs are what voters of most constituencies are demanding from their politicians. For locals of Dholpur and Karauli in Rajasthan, however, a broad-gauge railway line trumps all.

Citizens of these two districts in the eastern part of the state have time and again made the demand for this railway line //for how many years? (From 1992 but for the last 8-10 years this demand has risen fast)//, crucial for the area, but in vain. And they have squarely laid the blame for this on BJP MP Manoj Rajoria, who, they allege, deliberately stopped ongoing railway work, thus denying lakhs of people the much-needed service. If Dholpur-Karauli and Gangapur are connected to the railway line then the more then 25 pepple of  Dholpur and Karauli districts will be of direct benefited.  to the population of 25 lakhs.

Rajasthan will go to polls in two phases on April 29 and May 6, and Dholpur and Karauli citizens are flexing their fingers to ensure they teach BJP a lesson this election.

The history and geography of it

Currently, there is no railway connectivity between Dholpur and Karauli. There’s only a narrow-gauge train between Dholpur city and Sarmathura town of Dholpur district, operating for the last 114 years. Karauli is a further 44-odd km away from Sarmathura.

In the Railway Budget 2010-11, then UPA government had announced the conversion of this narrow-gauge line into a broad-gauge one and its extension till Gangapur City in Sawai Madhopur district. Chief Minister Ashok Gehlot, during that tenure of his, had even inaugurated the new broad-gauge line in Sarmathura in 2013. However, after the BJP came to power the next year, it changed the whole project plan.

In 2014, Dholpur-Karauli MP Rajoria wrote a letter to then railway minister Suresh Prabhu to declare the narrow-gauge railway line between Dholpur and Sarmathura as heritage //what was the intention of this move? They wanted to preserve the old line and build a new one? (How can we know the intention but Yes, the work of the broad gauge railway line was stopped due to the letter written by the MP to the then Railway Minister. ) //. The matter then reached the railway board. Since 2016, there has been no progress on the matter. Ministry of Railways had given this informationin Parliament too.

According to railway board sources, the railways, too, had carried out a survey to give the narrow-gauge line the heritage tag, but its report stated that the line’s condition was not ideal to be declared thus. //but how is the heritage tag going to solve the connectivity issues (The heritage tag can not solve the connectivity problem. The MP wrote in the letter that narrow guage rail line should be declared heritage and its parallel broad gauge rail line should be laid. )///

Since then, the whole issue has been in limbo—the current status is that the line is neither being converted into heritage nor broad gauge. Many of the stations on the Dholpur-Sarmathura route are in a deplorable condition. And to make matters worse, access roads to these stations are choc-a-bloc with encroachments.

One such is Angai station. The irony here is that the railways declared it ‘abandoned’, and yet, the train halts here; so passengers get on for a free ride. But reaching the station involves a 2-km walk, courtesy illegal occupation of railway land by villagers, leaving no way for vehicles to go in.

Gone off track
Maybe the citizens should thank their stars that there is at least one train on that route? Not really, because if one were to see the pitiable and filthy condition of its bogies, which have no toilets, dirty or otherwise, it would become clear that the train doesn’t even classify as “small mercies”.

A stationmaster, on the condition of anonymity tells this correspondent that the train fails to recover even the cost of the diesel it consumes every month—tickets barely totalling Rs 1 lakh are sold in a month, while the operating cost surpasses it by a mile.

Also, most of the railway crossings in the towns between Dholpur and Sarmathura are without any barriers, posing a safety risk.

Keeping these and many other problems in mind, its conversion to broad gauge and extension till Gangapur City had been announced in the 2010-11 Railway Budget. For this an approval for construction of 145.2 km of railway line also had been given.

Till March 2017, Rs 12.23 crore had been spent, on a few bridges and other minor construction between Dholpur and Bari, and Rs 10 crore allotted for the year 2017-18 with no sign of any real progress in the work.

…And they all jump on the (train)wagon
Congress candidate Sanjay Jatav from Dholpur-Karauli Lok Sabha constituency says, “The issue is topmost on my election agenda; if I get elected and reach Parliament, this will be the first task I’ll take on.

“Earlier, Rajoria got the work stopped, but now that Congress government is back in Rajasthan, I will get the much-needed support to restart the project.”

The BJP, on the other hand, seems either overconfident or indifferent. This time, too, it is fielding Rajoria in the constituency. “The train that runs between Dholpur and Sarmathura is 114 years old; in that sense, it is the region’s heritage. Hence, it should be declared so,” Rajoria insists.

“Then Congress government did not even initiate the process of acquiring land for the project and merely inaugurated the line. How can it be laid when there is no land?”

On April 15, at a Congress rally in Karauli, Gehlot raised the issue of the railway line in his speech and said, “Congress started it for the convenience of the people of Dholpur and Karauli, but Vasundhara Raje shut it down over vested interests.” A day earlier, on April 14, Gehlot had also held a meeting in Gangapur City over the issue.

Congress MLA from Baseri seat in Dholpur district and former MP from Dholpur-Karauli Lok Sabha constituency, Khiladi Lal Bairwa says, “This railway line cannot be converted into heritage. The MP [Rajoria] misused his power when he stopped the work on that pretext. Not only are the old train’s parts no longer easily available, but even the stations are crumbling as we speak. That’s why conversion from narrow gauge to broad gauge is of utmost urgency and importance. After the election, I will meet railway officials and try to restart the work.”

The line that needs to be drawn

Converting the line to broad gauge will make travel between Dholpur and Gangapur City much more convenient. It will present new opportunities for development and employment in the area as well as provide direct rail connectivity to many cities in South India from Gangapur City. It will also ensure better availability of direct trains from different parts of the country to reach the holy temple of Kaila Devi in Karauli district.

The local correspondent of Dainik Bhaskar in Sarmathura, Prahlad Garg, further attests to the importance of a broad-gauge line. “Sandstone is a huge business in Dholpur; so if the broad-gauge line is introduced, it will benefit hundreds of traders. There will be more employment opportunities for the local youths, besides a direct and affordable means of connectivity between Karauli and Gangapur City. Also, those headed to South India will no longer have to travel to Dholpur or Delhi to find a train,” he says.

Both BJP and Congress leaders have made different claims and promises with respect to this issue, but citizens are done waiting and want the line up and running at the earliest.

As the Dholpur-Karauli constituency is reserved for the SC category, there is no caste, religion or any other national issue relevant here right now; demand for the broad-gauge line, which has the potential to benefit over 25 lakh people from both districts, reigns supreme.

//what's the real reason why the railway lines hasn't come in? Red tape, like the chambal bridge?//

No, red-tapism is not the reason for this, but the insistence of being forced to declare a heritage train running in losses is a real reason. Informally, the MP has stopped the work because of a special purpose (we do not know the purpose). Otherwise, during the UPA-2, the Congress-led MPs' efforts led to the announcement of a broad gauge rail line and the budget was passed.