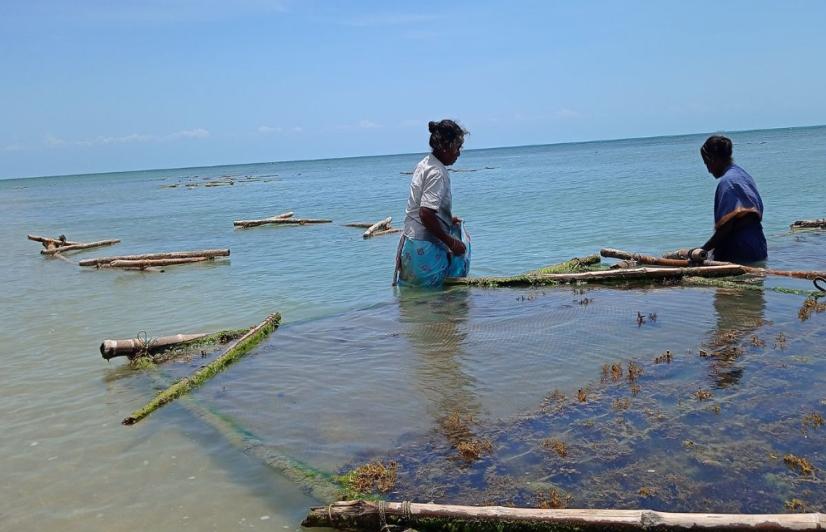 Ramanathapuram, Tamil Nadu: Women engaged in activities ancillary to fishing in the coastal areas of Tamil Nadu are losing their livelihoods due to the rising salinity of water and encroachment of commons by aquaculture farms.

Fisherwomen belonging to the marginalised caste groups of Mutharaiyar and Kadayar make ends meet by harvesting natural seaweed such as Gelidiella (known in Tamil as Marikkoḻuntu pāci), cultivating seaweed, mostly Kappaphycus, collecting seashells and engaging in small-scale cultivation, besides rearing of livestock and fishing in inshore waters.

During the favourable season (November to February) for Kappaphycus, a fisherwoman may earn up to Rs 500 a day, while ancillary activities may fetch anywhere between Rs 150 and Rs 200.

For these women to continue these activities and contribute economically to their families, safety at worksites, uninterrupted access to the seashore, unpolluted inshore waters and availability of potable water are paramount. The locals blame the aquaculture farms for the rise in salinity, both in their lands as well as household wells, thus polluting the water used for agricultural purposes.

The lack of capital, both its availability and access, has prevented these communities from investing in aquaculture farms and mechanised fisheries. Hence, they fish in the inshore waters using passive fishing gears and small rafts.

Nirmala from Ariyankundu hamlet in Pamban Island of Ramanathapuram said, “We used to cultivate grains on these lands seasonally, but lack of rain, poor agricultural returns and increase in value of real estate made a few locals sell their lands to aquaculture farm owners. The rise in soil salinity forced several others to give up their lands to these farms.”

The struggles of fisherwomen, however, is not recent. Kalpana Ram, in her 1992 book Mukkuvar Women, argued that fisheries have prevented women from directly accessing resources at sea and they can be engaged only in ancillary activities such as fish vending, fish curing, and net mending.

In the last few decades, modernisation of fisheries, including the introduction of trawlers and the development of coastal areas, have alienated the fisherwomen from their traditional sources of livelihood. In the book Sengeni, author Amidhavalli pointed out that fisherwomen in Puducherry are gradually moving away from fishing-related activities and working as housemaids and daily wage labourers.

From hope to despair

In the early years of aquafarms, many believed that these farms would provide them with employment opportunities. In the late 1990s, these farms indeed accommodated local labourers. At the time of preparation of ponds for cultivation and during shrimp harvest, a farm owner may employ about 50 to 60 locals, both men and women, for three to four weeks.

In addition, a farm owner may employ four to five local men on a regular basis to look after shrimp production. These opportunities in a way quelled the initial protests against aquaculture farms, which were taking root in coastal districts of Tamil Nadu, Pondicherry and Andhra Pradesh. There was an organised movement by farming and fishing communities against commercial shrimp farms which culminated in the famous case, S Jagannath vs Union of India, where the Supreme Court passed orders highlighting the social and ecological impacts of commercial shrimp farms. 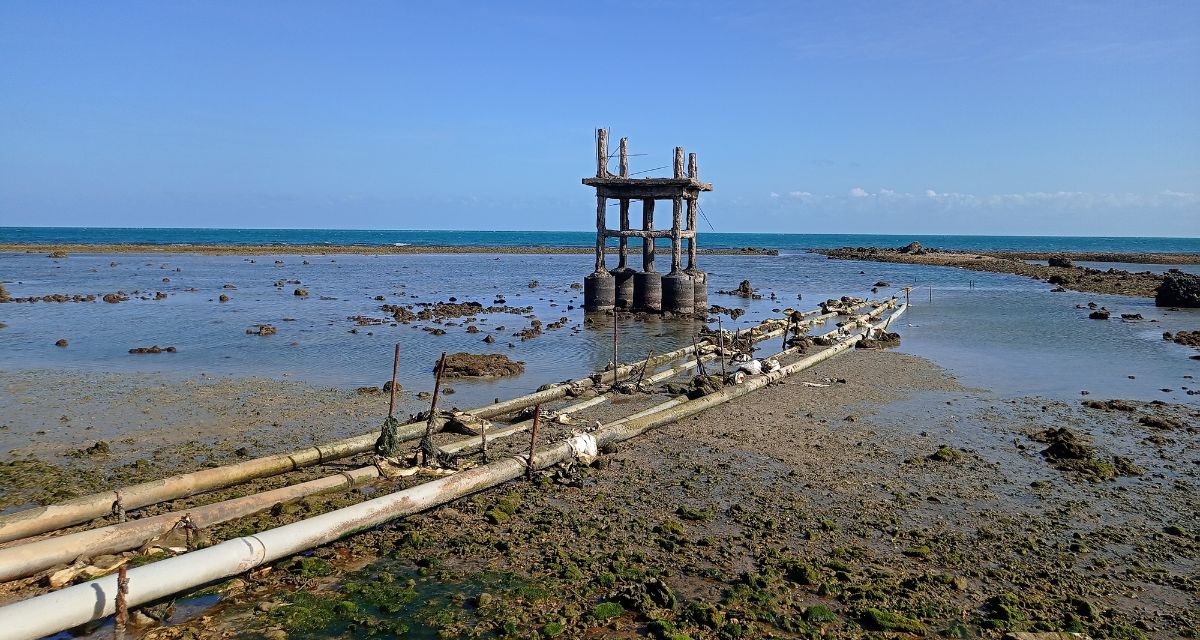 (Above) PVC pipes that pump water from and into the ocean; (Below) The wastewater post shrimp harvest is released into the sea and local freshwater sources (Photos: Prabhakar Jayaprakash) 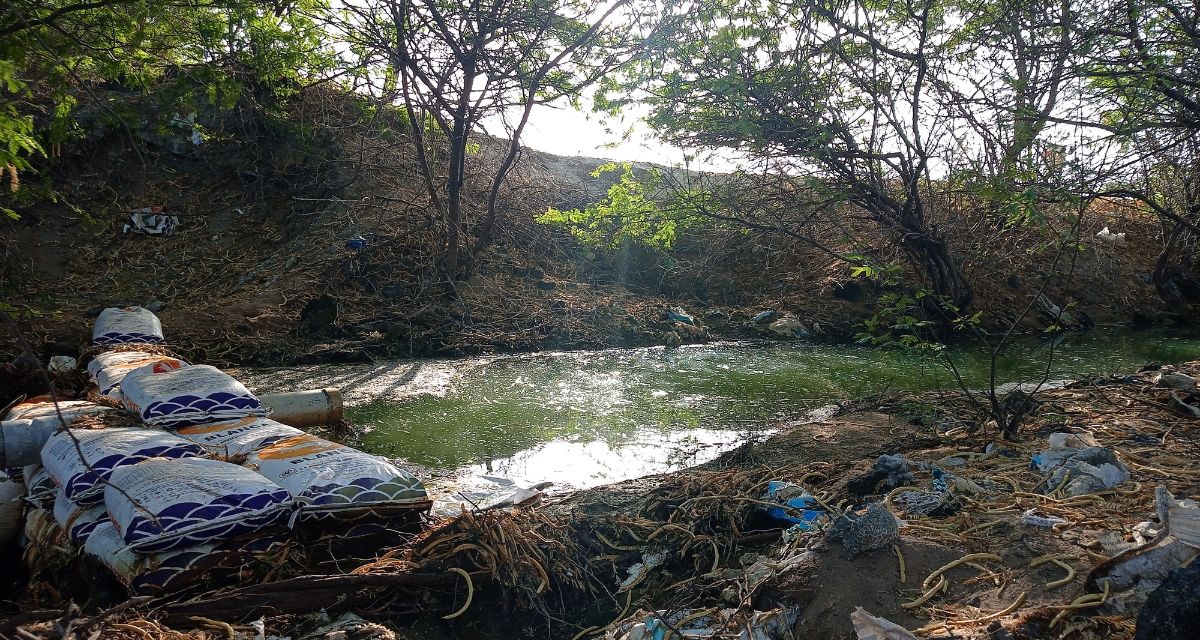 Within a year or two of the introduction of P. Vannamei, a Pacific white shrimp, in 2009, the number of aquaculture farms started proliferating. The frequent disease outbreaks and heavy financial loss led farmers to stop the cultivation of P. Monodon (tiger prawn) and switch to P. Vannamei.

The introduction of automation in earthworks, new kinds of fishing nets and influx of cheap migrant labourers from West Bengal and Odisha altered the entire process of production. Gradually, the number of locals being employed by these farms began to decrease.

According to Murugesan, the effluents that were drained into the inshore waters after the shrimp harvest are affecting the growth of Kappaphycus.

The aquaculture farms in Pamban Island use seawater for fish culture and have laid pipes on seashores to pump water into the shrimp ponds. The untreated wastewater from the farms is normally let out back into the sea. During the 'rough' season, i.e. the Northeast monsoon when the weather is windy and storms set in with big waves, it is released into the stormwater lake, locally called the Pancha Kalyani.

Balarajan, a small-scale farmer and livestock worker, told 101Reporters that the effluents destroyed the edible vegetation, including shrubs, coconut trees and palm trees, and contaminated made the Pancha Kalyani. Since this waterbody is an important aquifer here, potable water in household wells has also turned saline.

Studies have shown how artificial inputs in the form of fertilisers, feed and drugs, which are given for optimal growth of shrimp, are washed away into the canals as effluents during harvest; the large amounts of wastewater discharge pose a grave threat to the coastal ecosystem and the groundwater.

Moreover, in order to pump seawater for cultivation, many aquaculture farms illegally encroached the seashore to construct pump rooms and instal PVC pipes.

In May this year, a fisherwoman was raped and murdered in Vadakadu village of Pamban Island, allegedly by two migrant workers of an aquaculture farm. A few days before the incident, the workers had passed lewd comments at the victim when she was working alone. She had shared this unpleasant experience with a few of her close women relatives. After the crime, locals retaliated by ransacking the farm and soon several irregularities started to emerge. 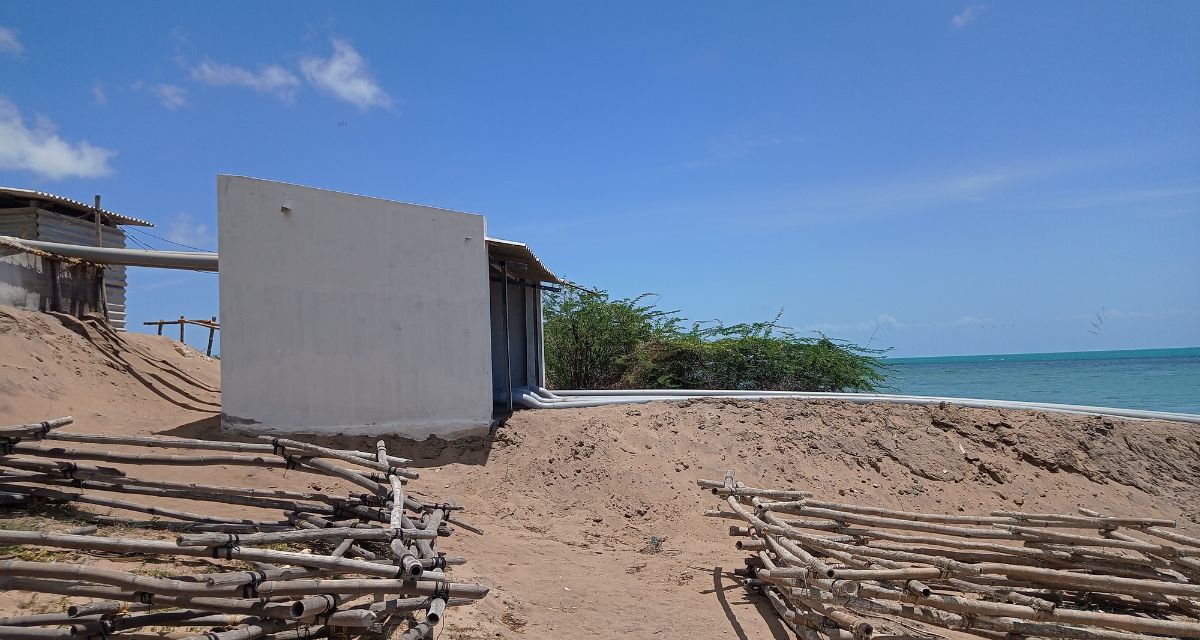 An aquafarm motor room within the high tide line, which is against the Coastal Aquacutlure Authority regulations (Photo: Prabhakar Jayaprakash)

Karunamoorthy, a local leader of Tamil Nadu Fish Workers Federation (CITU), said the island has over 100 aquaculture farms. “Many are functioning without proper licences. It was only after the gruesome incident that the fisheries and revenue departments found out that the farm in question was operating without a proper licence under the Coastal Aquaculture Authority Act, 2005,” he said.

Saravanan, an expert in the mapping of coastal commons, said as per section 13(8)(a)(b) of the Coastal Aquaculture Authority Act, 2005, these farms should not be located within 200m of the High Tide Line (HTL).

“This particular farm is located 30m from the HTL and its motor room is located within the HTL. Fisherwomen often come into conflicts with those representing farms with the latter accusing them of encroaching upon areas owned by farms,” Saravanan explained.

Fisherwoman Lakshmi (name changed on request) told 101Reporters that the representatives of the farm in question had threatened these women against trespassing and, on another occasion, they forcefully removed the thatched huts that these women use while mending nets, working on rafts, eating food and resting during hot afternoons. The farm had claimed that a portion of the inshore waters was  part of its patta. “Since we had no means to verify that claim, we just withdrew,” she added.

Rameswaram Municipal Chairman K E Naazarkhan said the municipality has passed a resolution on June 22, 2022, asking the state government to close down all aquaculture farms in the area and not issue fresh licences.

“The proliferation of aquaculture farms has contaminated potable groundwater. Also, the import of migrant labourers to the region is creating security concerns,” he explained why such a resolution became necessary.

Meanwhile, Shalini (name changed on request), a friend and colleague of the victim is still reeling from the shock of what transpired in their own backyard. “We don’t feel safe now to access seashore and inshore waters alone,” she remarked.