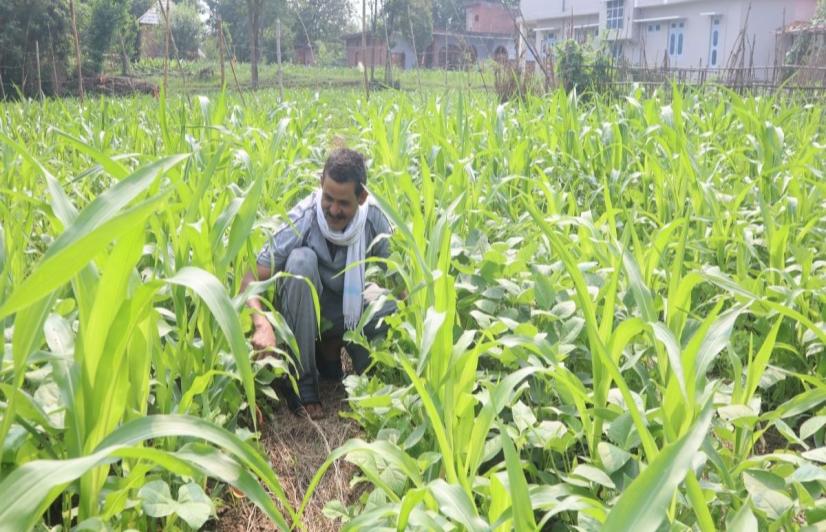 Natural Farming methods have significantly reduced the expenses incurred in the purchase of chemicals, insecticides and fungicides and improved the incomes of farmers in the Himalayan State.

Shimla: In light of declining production despite the increased use of expensive chemicals in farming, almost 1.16 lakh farmers of Himachal Pradesh have switched to natural farming, according to data provided by the State Project Implementing Unit set up for the promotion, implementation and monitoring of the natural farming program.

Himachal Pradesh which is popularly known as the fruit basket of India produces fruits and vegetables worth Rs 8,000 crores every year. In a state where the agro-horticulture sector contributes 13 per cent to the state's GDP, 10% of the farmers here have reduced their cultivation costs to the minimum by adopting the natural route and giving up expensive chemicals, insecticides and fungicides.

Instead of buying chemicals and pesticides from the market, the farmers of Himachal have secured profits by preparing natural inputs using cow dung, cow urine and indigenous vegetation. Earthworms also play an important role in natural farming and it is known to recharge the groundwater. This approach, also known as the Subhash Palekar Natural Farming (SPNF) method, encourages that all resources required for the healthy growth of the plant should be taken from its surrounding environment. It is named after a Maharashtra-based agriculture scientist who developed this low-cost, eco-friendly farming technique in the late 1990s. It was developed after a 25-year long research conducted by Padma Shri Subhash Palekar, credited as the father of natural farming.

Though natural farming eliminates the use of agrochemicals, it is different from organic farming. Unlike organic farming, the farmer makes various concoctions from locally available plants and other resources at his own farm. This decreases farmers dependence on the market for synthetic or bio-pesticides and fertilizers.

Due to the lack of irrigation facilities in Himachal Pradesh, several farmers had been moving away from agriculture. However, natural farming requires very little water. A vital component of this farming method is 'Mulching' i.e. covering the crop with live or straw mulch to retain the humus, which is required for the proper growth of the plant. Mulching reduces the water requirement to a greater extent in agriculture. This farming method is becoming effective even in areas with merely less or no irrigation facility.

Kalzang Lade is a resident of Chichham, one of India's highest inhabited villages, who started natural farming two years ago. "Our village is situated at an elevation of 4350 meters and has little rainfall. In such a situation, we face difficulties in saving our crops due to a lack of water. I adopted natural farming methods that require very little water. I am seeing good results," said Lade, adding that his cultivation cost has significantly reduced from Rs 18000 to Rs 10,000.

Professor Rajeshwar Singh Chandel, Executive Director of Khushhal Kisan Yojana, said that farmers in all the 12 districts of Himachal are adopting this method very fast. He stated, "In Himachal, more than 80 per cent of the area is rain-fed farming, and in such a situation, this farming method is proving to be more sustainable even in the condition of less rain."

The Himachal Pradesh State Government also introduced the 'Pratikriti Kheti Khushhal Kisan Yojana' three years ago to encourage natural farming with a mandate to enhance farmers' income while maintaining harmony with nature. To motivate farmers, an incentive of Rs 25,000 for the purchase of indigenous cows, Rs 8,000 for cowshed lining, 70% subsidy on purchase of drums required for input preparation, Rs 10,000 for setting up Sansadhan Bhandar (resource store) along with free hands-on training and exposure visits are being given by the state government. In a departmental survey conducted under this scheme, it was found that the farmers who adopted this method had reduced their agricultural costs by 43%.

Mayaram, from the state's Mandi district, cultivates garlic, maize, peas and wheat in his 7 bighas [one bhiga is about one-third of an acre] of land. Earlier Mayaram used chemicals worth Rs 50,000 every year for farming, earning about Rs 2.50 lakhs annually. But after adopting natural farming, his expenditure has dropped by almost 25%. His income has touched INR 3.5 lakhs. Similarly, farmer Ajay Ratna of Bilaspur district has brought his expenses down from Rs 30,000 to Rs 10,00 by preparing the natural farming inputs at home.

Dr Manoj Gupta, Principal Scientist, Agricultural Economics, Palampur Agricultural University, said that, "In the studies done on natural farming, farmers have seen a reduction in the cost of agriculture. Apple horticulture has seen costs reduce by 56% and a 27% increase in net profits of farmers without any special market facility. Apart from this, insects and diseases have also been seen less in the fields of those farmers and gardeners who have adopted this method of cultivation."

Anil Biswan, a horticulturist from the Shimla district, echoed this claim. Practising apple horticulture in 30 bighas of land, Biswan adopted natural farming five years ago. He claimed that his expenditure on chemicals used to be approximately Rs 70,000, whereas now it's only Rs 5,000. This switch has also seen Anil's income rise by Rs 3.5 Lakhs. As this method advocates the principle of companion crops, Biswan was also able to add to his overall income with his new crops.

Through natural farming, apple horticulture has seen costs reduce by 56% and a 27% increase in net profits of farmers without any special market facility. (Picture credit Rohit Prashar)

A sustainable and healthy future

Shailendra Sharma, who cultivates tomato and capsicum in Solan district, cut down his costs significantly and experienced immense health benefits. "I have been protected from the harmful effects of chemicals by adopting this farming method. I used to get headaches and allergies while spraying chemicals, for which I sought treatment at the Post Graduate Institute of Medical Education & Research (PGI) in Chandigarh. Now, by adopting natural farming, my health-related problems have been completely relieved," he stated.

Professor Chandel added that by introducing Subhash Palekar's natural farming method, the state government is working towards increasing the farmers' income and reducing the threat of climate change. This farming method also contributes significantly to the 17 Sustainable Development Goals set by the United Nations.

The COVID lockdowns have seen significant return migration in the northern Himalayan States. People returning home from outside states have turned to agriculture for their livelihoods. This sustainable and inexpensive farming method has emerged as a lifeline for these people.